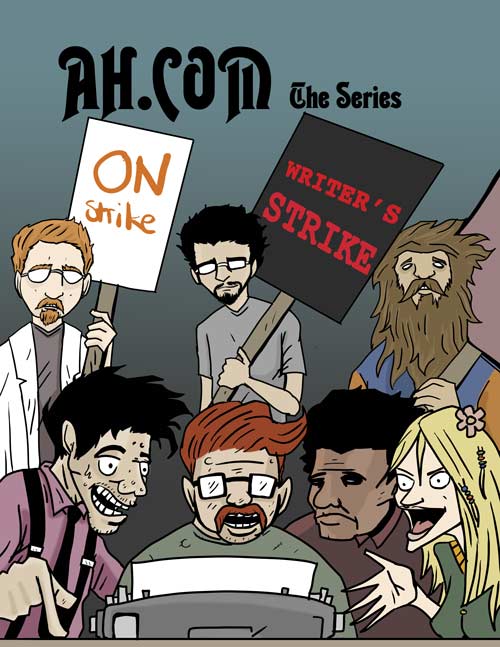 Unusually part of this episode takes place out of continuity, featuring the Writer Chimps and the Editor in Chief, Psychomeltdown, with Ian as the Executive Producer. The Writers are on strike (parodying the American writers' strike of 2007/8). In response, Ian wires up the studio to explode if the ratings drop below 50% (a reference to a Muppets episode itself a parody of 'Speed') and tells Psycho to solve the problem before vanishing.

Psycho fails to persuade the Writer Chimps to back down because they attack him as soon as he tries to talk to them. Meanwhile, we keep cutting back to in-Series continuity, featuring the AH.commers being bored and lethargic because no-one is writing for them, and all exterior shots being recycled footage. Psycho tries putting together clip shows, but this fails when the film snaps and the AH.commers just reminisce about them reminiscing five seconds before.

Finally, Psycho decides to hire scabs, and so bursts all the trolls out of the Hall of Infamy and makes them write an episode. The resulting episode has each troll writing one AH.commer's lines (which is which is never stated - some are easier to tell than others) and the episode centres around Doctor What, written by radical_neutural, trying to find a planet of hot Asian women he's related to to have sex with. The AH.com ship erratically finds such a planet, only to find the relationship is not quite what he expected - and a teleporter error causes all the troll-written AH.commers to start merging together, triggering memetic mutation.

The Doc has to undo everything by jumping over a shark tank and pressing a big red reset button. Meanwhile, the Writer Chimps break through into the script room and accost Psycho, just as the ratings click down to 50% - but of course Ian intervenes, sends all the Chimps back to work, and asks Psycho why he didn't just write an episode himself. Because that'd be too much like…work, of course.

The episode was largely inspired by the memetic mutation troll phenomenon observed and codified by Susano.

Who wrote who ? As no-one has taken Thande up on his challenge to identify the trolls…