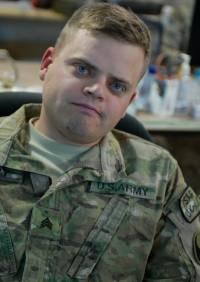 American board member, hails from New Jersey. Best known for being (until recently) a member of both the U.S. Army and the U.S. Marine Corps and serving in Afghanistan (2011) and Iraq (2003) respectively. He was also one of the most prominent participants in the Shared Worlds forum. Once upon a time he served as the main moderator in the forum, until the place nearly drove him insane. Today he has little to do with the mess that is Shared Worlds, although he does take an occasional look to see if it has managed to burn itself down yet.

Matt is currently attending American University in Washington, D.C., and until recently had chronicled his struggle against his evil roommate Tinfoil in the Daily Struggles of Park Bethesda. He won the war, which made him do a little happy dance. But this made most of the board sad since it meant no more stories of what quite possibly be the world's most stupid human.

He is interested in military history, American history, and has a bizarre unexplained fascination with Czechia.

He likes Powered Armor, and not in the fan-boy way…

Not to be confused with MattII, who is a New Zealand board member.

Matt has changed his screen name twice, from MBarry829 to MBarry and then to Matt. The Board is waiting for the day when Matt changes his name to M.