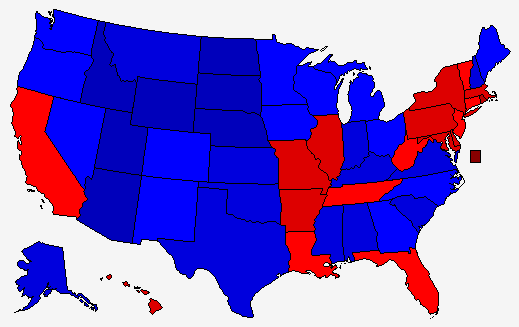 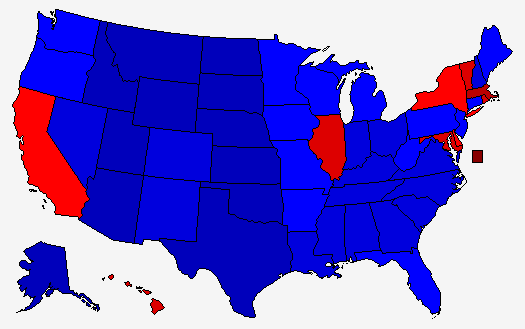 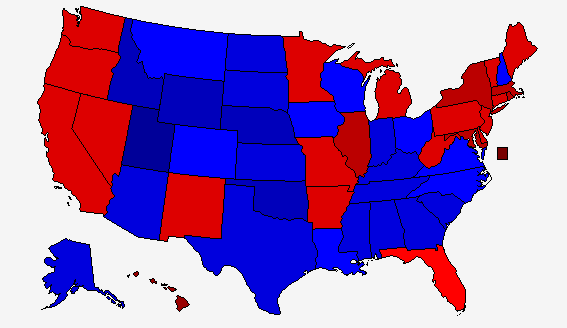 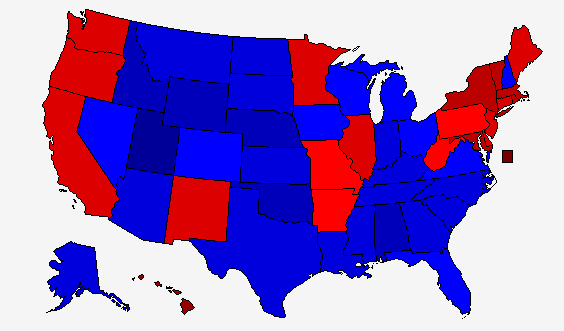 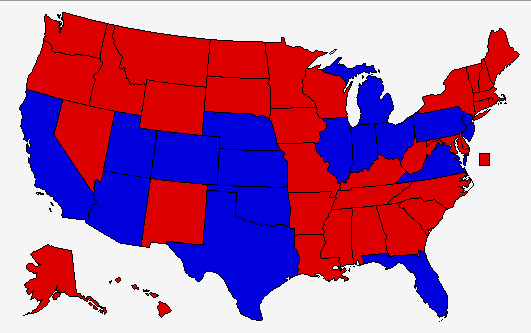 I guess that Jimmy broke that whole texas thing then

I wonder what greatness Carter would offer or how much Reagan would piss off the middle states to give Carter Montana, Idaho, Wyoming, both Dakotas and Alaska. I get it is a what if, but still fun to imagine

The final, and most populated, state - Media California!

There'll be other stuff down the line, but this one will be the final "regular state update".

Media California is a juggernaut of a state, being the most populated state in the Union with close to 30 million inhabitants. It is also an extremely diverse state, with Non-Hispanic whites making up around 32% of the population and Hispanics making up over 47% of the population. Being the largest state on the "Left Coast" Media California is very much a Progressive leaning state, however adaptions by the more conservative elements have allowed for the state to be more competitive than its northern or southern counterparts.

Similarly to Alta California the Republican party was the dominant force in the state prior to the 1980s, not only among rural whites but also suburban whites in San Bernardino, Orange County, and San Diego. However, while the 1980s was an era of national domination for the Grand Old Party, which regularly won elections in Midwestern states like Assenisipia and even Upper South states like Kentucky the rise of the Progressive party lead to their decline on what would by the 1990s be known as the "Left Coast." The inability of Republican free market economics to solve the AIDS crisis, newfound concern for the environment which went against the GOP's ideal of cutting regulations, as well as growing immigration from both Latin America and Asia all combined to lead to a sharp decline in the Republican parties of the West Coast and their subsequent replacement by the Progressives.

While the death spiral of the Republican party in Media California began in 1982 with the election of Tom Bradley it was the election of 1998 put the final nail in the coffin. This election saw the GOP attempt to stir up anti-immigrant sentiment by proposing a ban on any state assistance to illegal immigrants. Such an exclusionary act in a state whose economy was built on the backs of immigrants proved to be extremely unpopular and resulted in the Republican party losing dozens of seats, ending up with only seven representatives left in the House. Now on the brink of extinction decided to do the unthinkable and entered talks with Hispanos Unidos to discuss merging their two parties to form a viable right-wing alternative to the Progressive hegemony. Seeing how the Progressives had by this point in time ruled Media California uninterrupted for 16 years the name for their new party was chosen to be the Progressive Conservatives, showing to voters that they were moderates who still wanted to progress society forward while at the same time holding certain conservative values.

The new Progressive Conservatives immediately began to surge with the FPTP seats in the Senate particularly benefiting the united conservative front far more than the divided one that had existed before, and in the 2002 election they were finally able to take back the governor's office with the help of the Democrats and Asian Action. Before they came into power, however, the Progressives decided to take a page out of the New Mexican government and implement language boards that would include every language which over one percent of the population spoke. The Progressives believed that with their diverse voter base, especially among Asians, this would lead to the Language Boards becoming a solid lock on their power, and thus not only were language boards given one (or two for the largest two) senators but also given a separate veto power with just a simple majority of total Language Board reps, which given the disproportional method of representatives gave great power to smaller languages. However, contrary to the Progressives' belief these language boards were not a solid lock for them, as not only did individual language board parties develop but also the Progressive Conservatives and even Democrats began to adapt to this new situation and began to contest the LB seats. Throughout the 00s the PCs continued to grow, making the Hispanic board, through its Hispanos Unidos affiliate, Arabic board, and Armenian boards strongholds of power, and even gaining an absolute majority in the House in the 2008 election, though their voteshare eventually collapsed again following the Second Great Depression. Since then the Progressives have continued their rule as Media California's largest party, but as the Second Great Depression continues without much improvement the Progressives' support has been slowly dripping away again.

Just as in other parts of the "Left Coast" the 2018 election saw the Progressive party taking major losses, with much of the support going to the Progressive Conservatives, but also to Asian Action and Partido Revolucionario as racial tensions have begun to flare up by those who blame other races for their economic problems. This resulted in the Progressive Green government losing their majority in the House, though they did manage to maintain it in the Senate. Thus, while the Progressive Conservatives did manage to gain triple digit seats for the first time since the Second Great Depression a Progressive lead government was still inevitable, even if it might take some difficult negotiation. Finally, after a few months the Progressives managed to reach a supply and confidence agreement with the Partido Revolucionario, giving labor unions more bargaining power and special funding to Chicano non-profits in exchange for their votes. However, this alliance remains fragile, with a vocal minority of Partido Revolucionario being opposed to any compromise with the "colonizer" whites and Asians and many of the Progressive black and Asian members being unsettled by the idea of working with ethnic separatist. Yet with no other combinations being mathematically possible those unhappy with the deal will have be content at this supply and confidence agreement.

Government:
Progressive/Progresista/Progresibo/Jinbu/Al-Taqaddum/etc - The largest party in Media California, in this election they only narrowly came ahead of the Progressive Conservative with 105 seats to the PC's 100. However with their reliable base of Southeast Asians, African-Americans, and urbanites generally they still remain a formidable force that has been able to still cling to power.
Greens/Verdes - A fairly left wing branch of the greens, while they may be slightly to the left of the Progressives on Environmental issues they are behind on racial issues and the majority of their voterbase consists of middle class socially liberal Anglo whites. Due to their close political positions the party has become very closely linked with the Progressives, and ever since the Second Great Depression have become more or less the richer and whiter extension of the Progressive party.

Supply:
Partido Revolucionario - A party for working class Latinos, the Media California Partido Revolucionario is unique for having a large section of ethnic nationalists who believe in the creation of a Chicano state called Aztlan. Aztlan would cover all the US states formerly controlled by Mexico and be populated by only the Mestizos and Indios who hold an ancestral right to the land, while all the "colonizer" whites, blacks, and Asians would be deported back to their home countries. In the past this radical Chicano section drove most Mexican-Americans in Media California away to more conciliatory parties like the Progressives or Hispanos Unidos, but with the Second Great Depression continuing without an end in sight more and more Mexican-Americans have begun to support this Chicano movement and resent the privileged positions of Asians and whites. However, with the Progressive government now giving millions of dollars in grant money to Chicano cultural institutions that praise the history of Mestizos and Indios in the American Southwest the more moderate separatists have all calmed down for the time being.

Credit for the basemap goes to Chicxulub.

It's beautiful. Can't wait for the county map.

Here's the state map of what party each state's government is dominated by. 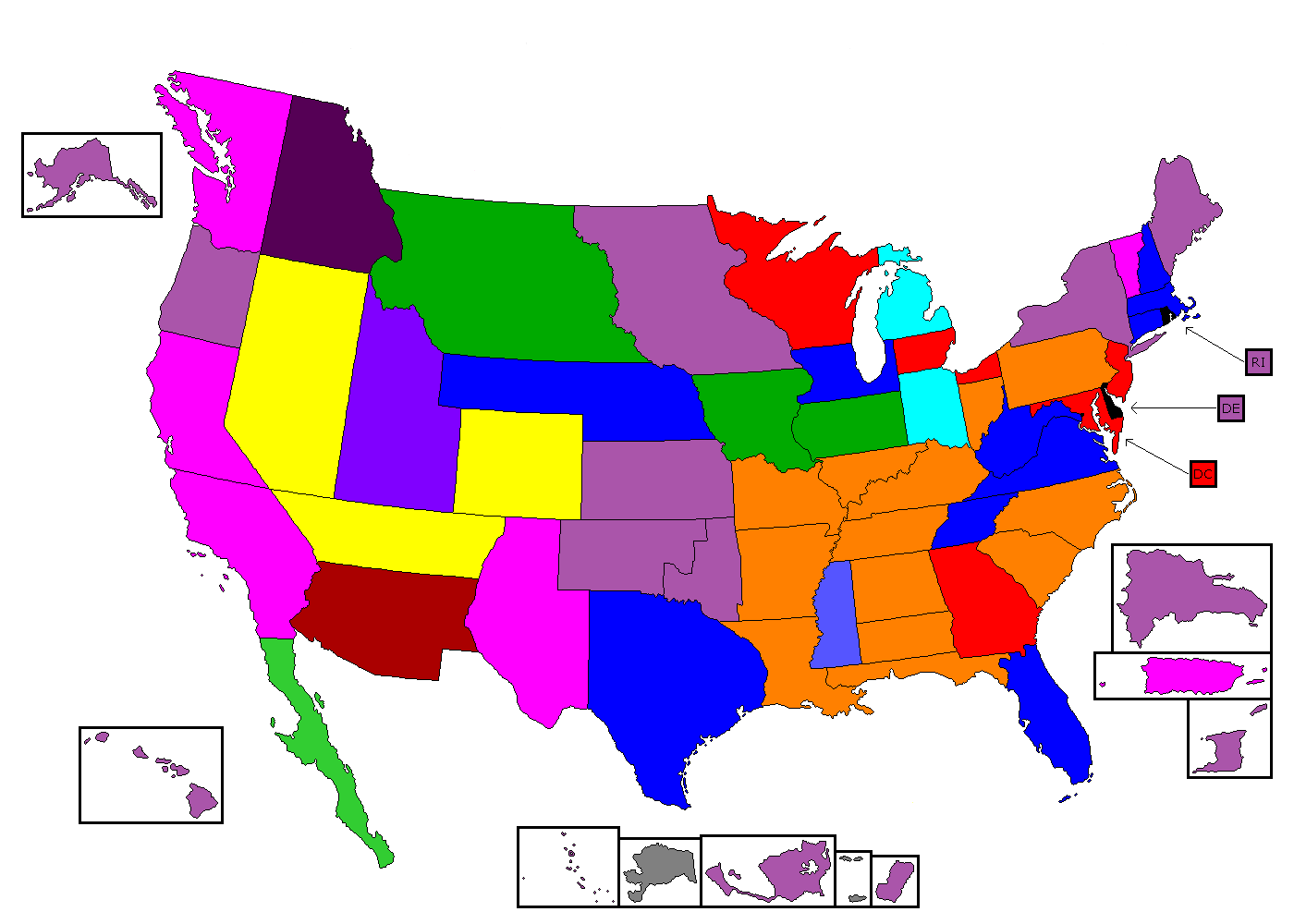 Could you send me the individual state margins? I'd love to create a county map for this at some point.

What an incredible series this has been!

Tex Arkana said:
Could you send me the individual state margins? I'd love to create a county map for this at some point.
Click to expand...

All the states that flipped to Carter have a margin of 1 vote in favor of Carter. Have fun!

Hydrons said:
All the states that flipped to Carter have a margin of 1 vote in favor of Carter. Have fun!
Click to expand...

So the states that stay with Reagan don't change at all from the actual results, right?

Tex Arkana said:
So the states that stay with Reagan don't change at all from the actual results, right?
Click to expand... 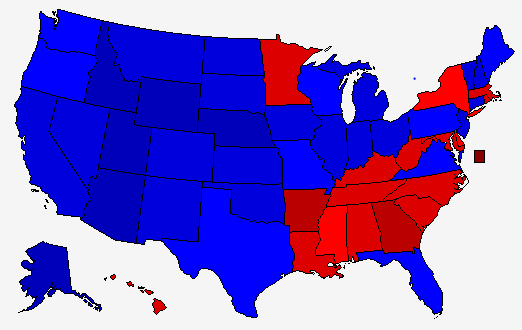 In the Chamber of Deputies, the PCI encroach upon DC's traditional regions in the northern and central parts of the country, as well as urban areas in both the north and south. They win all of Piedmont and Liguria except Cuneo (where DC wins 30% to PSI's paltry 15%), and take many peripheral areas of the northeast, among them provinces home to the major cities of Milan, Venice, and Trieste. The communists naturally sweep nearly every province in the Red Triangle, though the Christian democrats record a narrow win in their traditional stronghold of Lucca. In the provinces of Marche, the PCI win all but Macerata; they also take areas in northern Abruzzo, a traditionally safe DC region. In Lazio, Rome and Viterbo both swing to the communists. Many parts of the south actually vote more strongly for DC in 1992 than 1976, particularly Molise, Campania outside Naples, and parts of Sicily. Overall, though, the PCI is able to pick up several urban provinces, namely Naples, Foggia, Brindisi, and Taranto. In the islands, they win Ragusa in Sicily and Cagliara and Nuoro in Sardinia.

In the Senate, the PCI scores several narrow but significant pluralities in Piedmont, Lombardy, Lazio, Puglia, Sardinia, and Calabaria (the latter despite not winning any pluralities in Calabria in the Chamber of Deputies). They win 12 of 20 provinces, with DC hanging on in most of its strongest regions in the northeast and south. 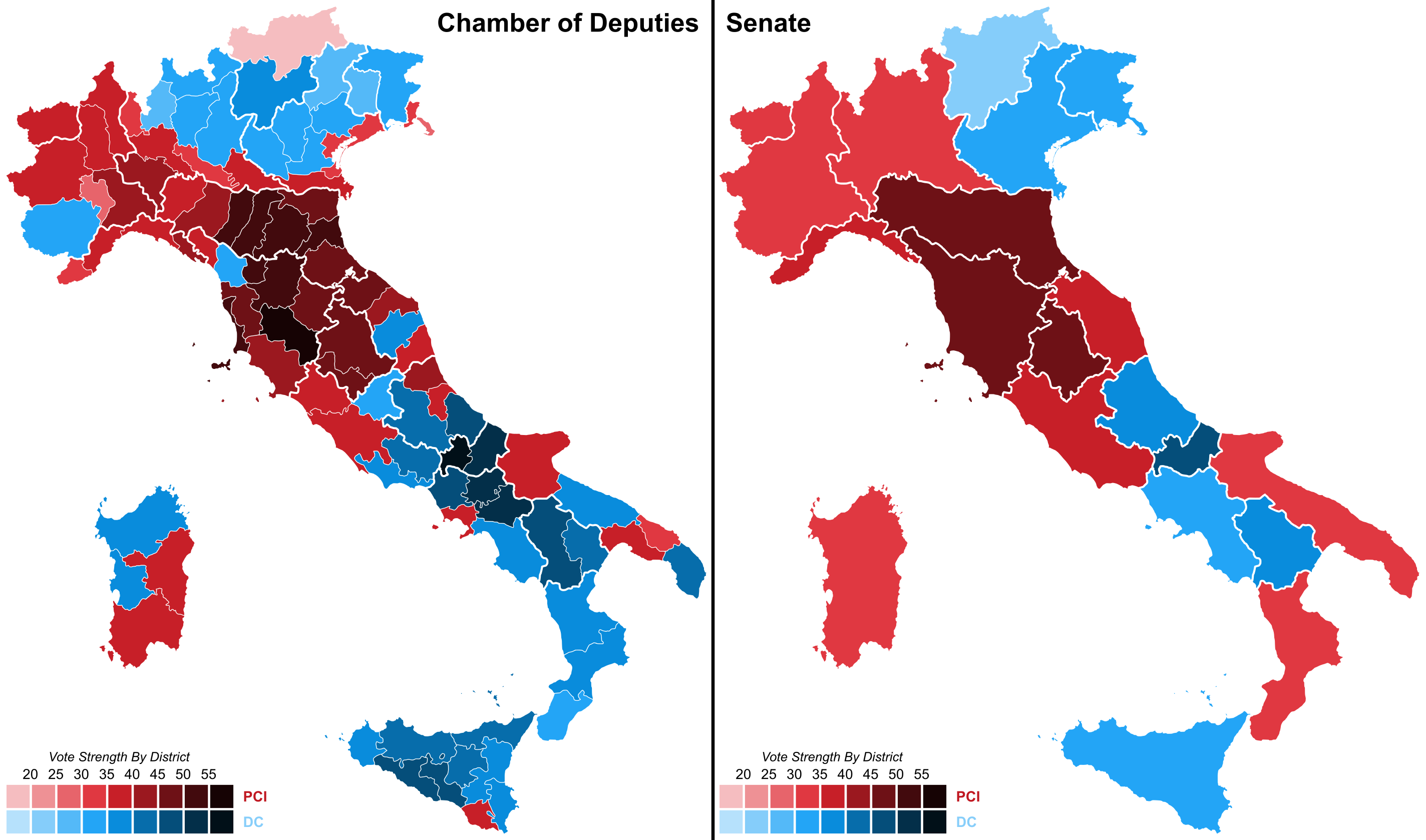 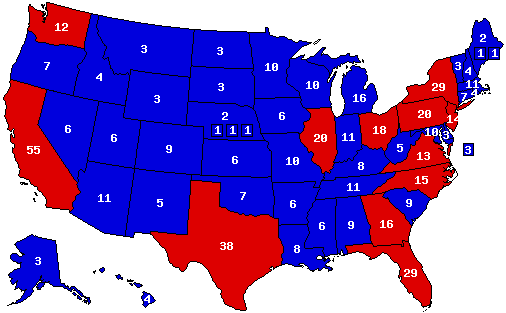 A bare minimum electoral college victory going from top to bottom. I used the democrats in this case because lets be totally honest, a democrat is more likely to pull this off than a republican, at least today. There is a good chance that the person who did this would probably lose the popular vote by a larger percentage than ever before of EV winners. This also gives a answer on the most states somebody can win but lose overall: 38 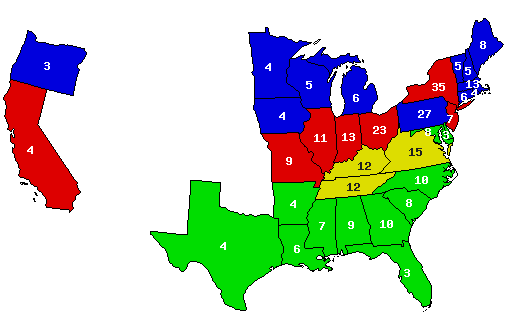 Douglas wins every state he lost by less than 10 percent

I would think that since in this case, he would almost certainly win the popular vote, and would lead in the electoral vote, he would be picked as president as a 'compromise'

A bare minimum electoral college victory going from top to bottom. I used the democrats in this case because lets be totally honest, a democrat is more likely to pull this off than a republican, at least today. There is a good chance that the person who did this would probably lose the popular vote by a larger percentage than ever before of EV winners. This also gives a answer on the most states somebody can win but lose overall: 38
Click to expand...

Michigan Mapper said:
Give Michigan to the Dems and Washington and Virginia to the Republicans, and the Dems still win with 270, while the Republicans carry 39 states and DC.
Click to expand...

Oh wow, you're right. I totally missed that. But yeah, that even further exploits the point of how brutal something like this could theoretically be given the right -or wrong depending on perspective- situation 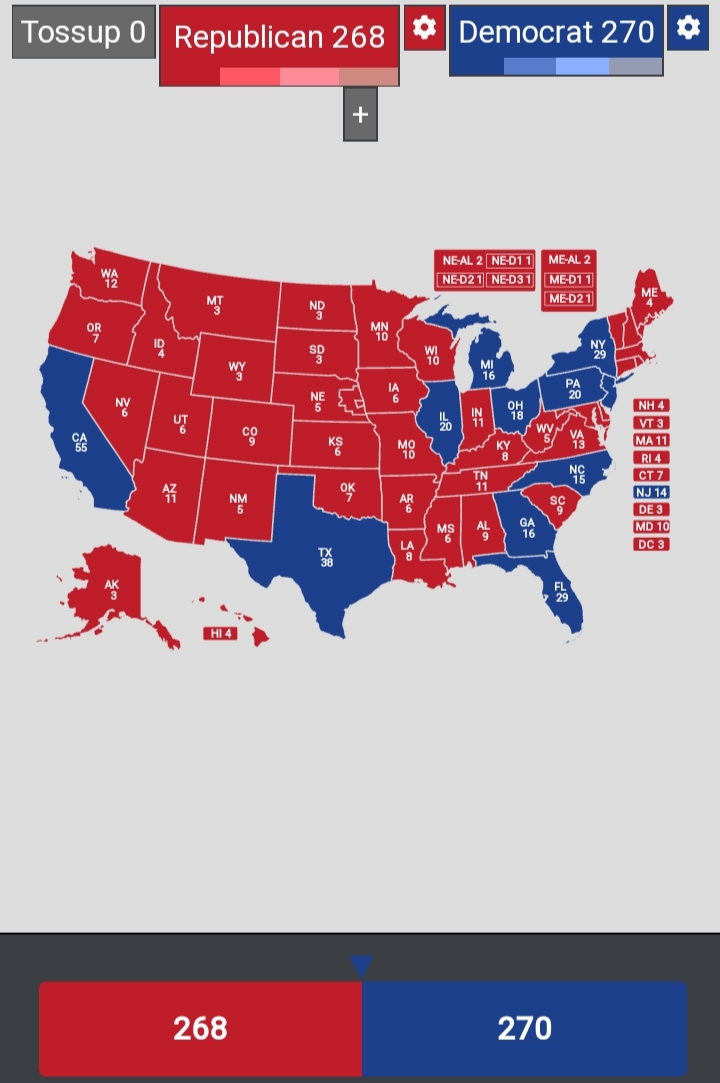 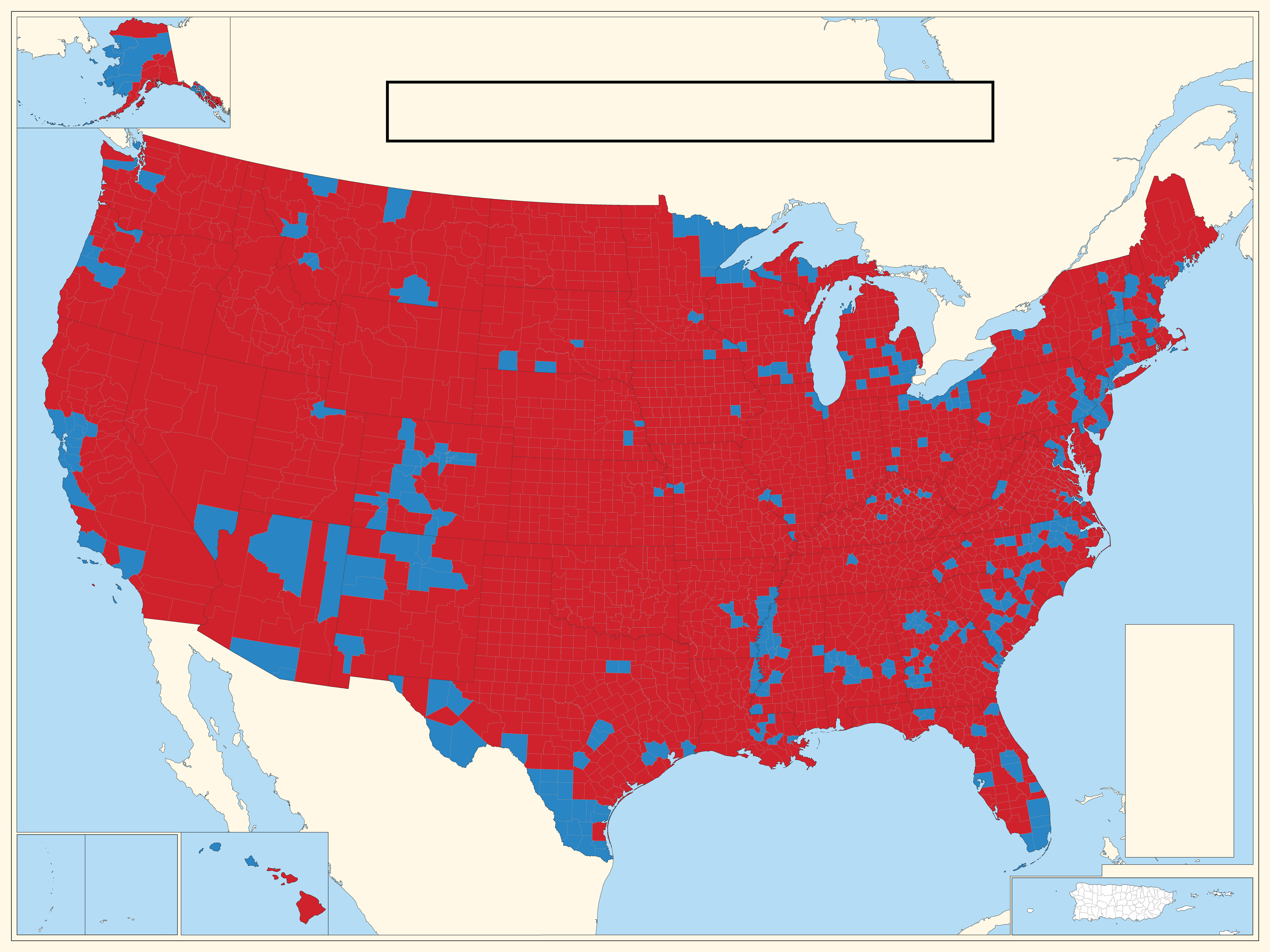