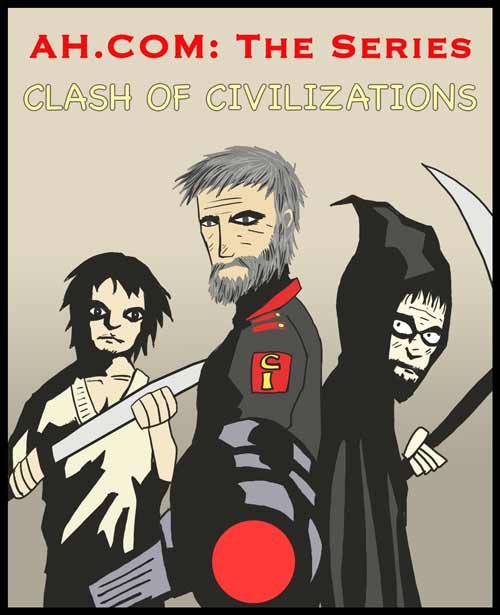 Unbeknowst to them, they're being watched by MerryPrankster, one of the CF.net crew.

Later, aboard the AH.com ship, What has plugged the device into Leo Caesius and discovered that the device has provided the crosstime coordinates for a particular planet and a particular location on said planet's surface. Said location contains a stash of crosstime bombs capable of meshing two timelines together. Since the crew is low on funds, they decide to go to that planet and retrieve the bombs so that they can get the bounty Ian has placed on such weapons.

They arrive on the planet and discover the bomb stash is protected by some kind of energy field, so they can't merely teleport in and get it.

Meanwhile, the CF.net arrives at the same planet. The CF.net can't teleport in either, so Ward decides to land on the planet's surface. They're attacked by a band of Bedouin, who they easily defeat. Abu Ghraib-style interrogation of one reveals that the planet is ruled by Hank Fletcher, and Ward decides to make a deal with the dictator.

While this is going on, the AH.com crew have decided to visit one of the planet's cities. Othniel is lured away by a job offer and is nearly castrated for harem service, but is rescued by Dave Howery and Psychomeltdown. Straha attempts to interfere with this because Othniel destroyed his weed stockpile, but Psychomeltdown disciplines him.

Meanwhile, Ward negotiates with Hank. Hank initially refuses to deal with Ward, but relents when Ward points out that he's not supposed to have the crosstime bombs in the first place and that the CF.net can provide him with new and wonderful weapons.

Back at the city, the AH.commers are attacked by T-72 tanks. Matt destroys one with his rocket launcher, causing the crew of others to surrender. Othniel rescues Straha, who was about to fall off the ship into the mass of attacking Arabs.

Meanwhile, Hank and Ward (with MerryPrankster and Romulus Augustulus as his escorts), meet up near the site of the bomb stash. Ward attempts to pimp N_Red to Hank, but N_Red rips off Hank's mustache to reveal that it's fake. Further violence is interrupted by the appearance of the AH.com ship, which breaks through the energy shield surrounding the cache. Hank leads his personal guard and the CF.net crew through a secret tunnel to where the bombs were stored.

The AH.commers enter the mountain caves where the bombs are stored, and Thande saves them from being crushed by a giant boulder. They arrive at the site of the crosstime bombs, only to find…

Fallen overlord Mike Collins and his apprentice Molobo are waiting for them. The diabolic duo plan on using the bombs for an attack on the Hub. Mike has “unobtanium gauntlets” that enable him to deflect bullets and beat the AH.commers about psychokinetically. When Hank and the CF.netters arrive, a general melee breaks out. Dave Howery and Mike square off and Molobo interrupts Hendryk's attempt to hoot Mike before Mike is able to get his gauntlets working again and escape the scene with the bombs.

Ward and the CF.netters pursue Mike, with Ward threatening the recalcitrant with pictures of his grandchildren. The AH.commers flee aboard their ship and briefly pursue Mike and Molobo's vessel before they're set upon by Hank's air force. They defeat the attackers, although falling aircraft kill (TTL's version at least) of Macsporan and Melvin Loh on the ground.

No sooner have the AH.commers defeated the MiGs when they're set upon by the CF.net. The ship is badly damaged, but the crew is able to Shift into another TL where they can recover.

The story is later continued in The Return of Mike Collins and Molobo.