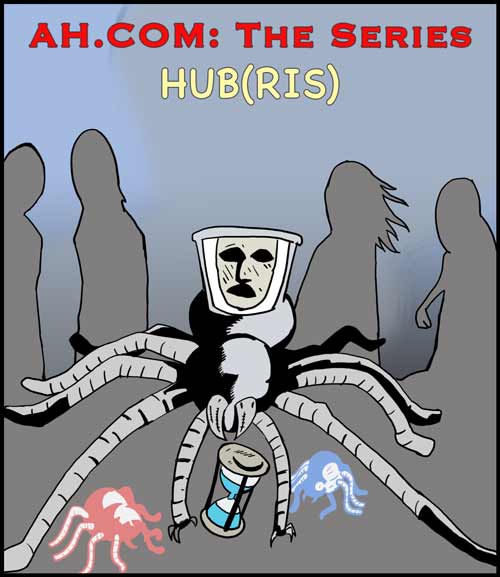 Doctor What takes all the AH.commers to visit Ouroboros, where he ended up in last week's episode (LIFE, EVERYTHING, AND THE PUB IN THE HUB). Though the AH.commers enjoy themselves, GBW and G.Bone uncover a dastardly plot by an unholy alliance of Google, led by TheLoneAmigo, and the NQLA, led by (one version of) Flocculencio and Sbegin. They themselves are discovered and are corrupted into NQLA members after being bitten by Google Spiders.

A Google trick with holographic political flamewars means that Ian is locked inside a Hub warehouse. The combined Google and NQLA armies then attempt to take over Ouroboros so that they can steal Ian's store of Time - which drinks are paid for with. Doctor What, however, rallies the AH.commers against them. The AH.commers lose, but they gain enough time for Ian to blast his way out and get there in time to stop the NQLA and eject Google from the premises. TheLoneAmigo vows revenge on Doctor What for this. GBW and G.Bone are cured of the NQLA poisoning by Thande and his clone from another timeline, Forum Lurker.

Hub(ris) was one of the more action-oriented episodes. Its events would later be consequential in, among other episodes, A WRETCHED HIVE OF SCUM AND VILLAINY.

Thande's second episode to be aired, although it was actually the fourth one he wrote. The best received of all his episodes in the first season. The title refers to the fact that the enemies are committing hubris against Ian in the Hub.