Hamsters of the Inquisition 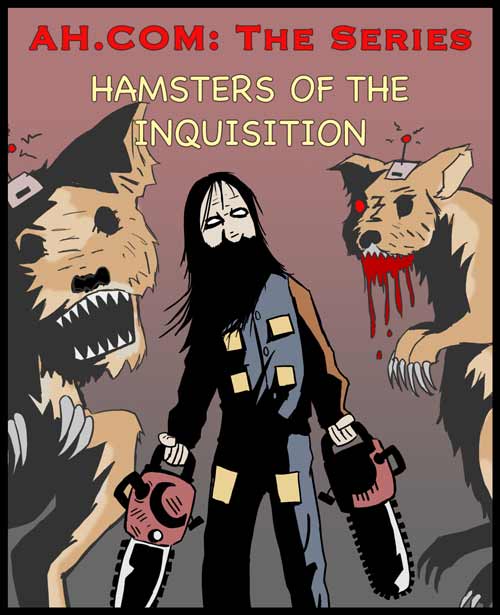 The episode starts with the crew and ship over a timeline in which the USA seems to be in a state of civil war. Dr. What is reluctant to go down, but it turns out that the ship is out of booze and Othniel deleted all of Dr. What's porn from the computer… so, an away mission is planned. Dr. What and a picked team takes a shuttle to the surface, landing near Washington DC. Thanks to Weapon M, the team quickly finds themselves on the wrong side of the law, and surrounded by a horde of Inquisitor troops and a pack of vicious velocihamsters (one of the titular critters). The team (naturally) beats their enemies and gets away, but Othniel ends up in pieces in a box, and Dave Howery is missing, although nobody realizes or cares immediately. Dave Howery is taken to the Inquisitor Palace, and faces the Most High Inquisitor, Michael E. Johnson. Here, we find out that the USA is controlled by a strange anti-theocracy, a government of fanatical atheists. Dave Howery is sentenced to 'the Torture', which turns out to mean being locked in a room and forced to listen to Celine Dion sing rap. Meanwhile, the rest of the team (minus Othniel)reluctantly agrees to rescue Dave. However, they immediately get captured by the local version of Diamond, who turns out to be one of the resistance leaders fighting MEJ. The two sides agree to sneak into the Palace and find Dave. As they do, the episode gives us glimpses of other battles across the USA. In California, the local version of Straha leads rebel forces against a vast horde of velocihamsters. In Utah, the local Othniel finds his troops facing an Inquisitorial army bolstered by massive Mechahamsters. In Montana, the local Dave Howery's ranger force goes up against a flying monster called the Great Black Flumph of Doom. Back in DC, the team sneaks into the Palace, finds Dave, and frees him (and puts MEJ's subordinate, Napoleon XIV, in the Torture room), but sets off the alarm. As they are trying to escape, Dave is cornered by MEJ, who threatens to put him back to the Torture. Dave goes nuts and saws through a support column and brings the roof crashing in (miraculously not getting squashed himself). MEJ is crushed to death, and all across the USA, the Inquisitorial forces are beaten. The crew returns to the ship with a massive reward of porn and booze, and all is well with the universe.