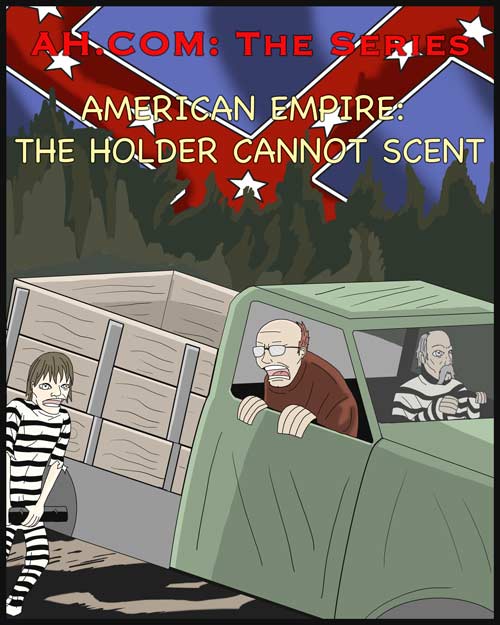 Whilst teleporting back from a post-apocalyptic planet on which Doctor What is playing Charlton Heston, he, Diamond, IronYuppie and Dave Howery vanish from the teleportation stream. As the AH.commers frantically try to get them back (because Doctor What owes them money), Doctor What, IronYuppie and Diamond find themselves in an alternate Toronto. They are attacked and captured by the Quebecois army, specifically Sbegin, Valamyr and Quarantesept, an alternate fortyseven. However, Howery is nearby, and follows them.

In the cells, Diamond learns that they are stuck in the 1941 of Harry Turtledove's Great War universe. Canada, conquered by the United States of America, is being held down by Quebecois forces. Doctor What is confronted by his analogue in this timeline, 'Docteur Quoi', who leads the Quebecois occupiers and successfully tortures him using lesbian porn. Meanwhile, Howery busts Diamond and IronYuppie out - after hemming and hawing about the morality of acting against an America that has conquered Canada. He knocks out the prison guard Sbegin using a doughnut laced with chloroform - she didn't notice because she had no sense of smell. In other words, in this American Empire, the Holder Cannot Scent.

Back on the AH.com, attempts to repair the teleporters have met with problems at the hands of Kit, and so instead they revive the crosstime-equipped shuttle 'Mynx' from LIFE, EVERYTHING, AND THE PUB IN THE HUB and fly it into the Great War universe. Unfortunately it appears right over the war zone in Ohio and is shot down. The AH.commers rescue two Confederate prisoners, alternate luakel and Robertp6165. They capture a Confederate van with a puncture, but manage by getting luakel to hold up the axle and run alongside the truck. Until he is shot by Sam Carsten, who is in turn shot by the others for being so repetitive.

Meanwhile, Howery, IronYuppie and Diamond rescue Doctor What from Docteur Quoi using the old is-it-him-or-me method. While escaping they are run over by the other AH.commers in the Confederate truck. The two groups meet up and they flee into a nearby pub, escaping into the Hub using the door marked 'authorised personnel only'. Robertp6165 is taken away by two Confederate soldiers from a timeline where he is President of the CSA, and Senator Michael E Johnson is just about to veto a bill on freeing white serfs.

There is also a scene featuring a game of 'Timeline Poker', where bets are made using time, as in HUB(RIS). Psychomeltdown has cited this scene as one of his favourites of Thande's.

Thande's first episode for season 2, but actually the third one he wrote for it.

The title is a play on Harry Turtledove's novel American Empire: The Centre Cannot Hold, part of the Southern Victory (TL-191) book series (which this episode lovingly parodies).