In Da Gadda De Vita Through a Cracked Dark Mirror 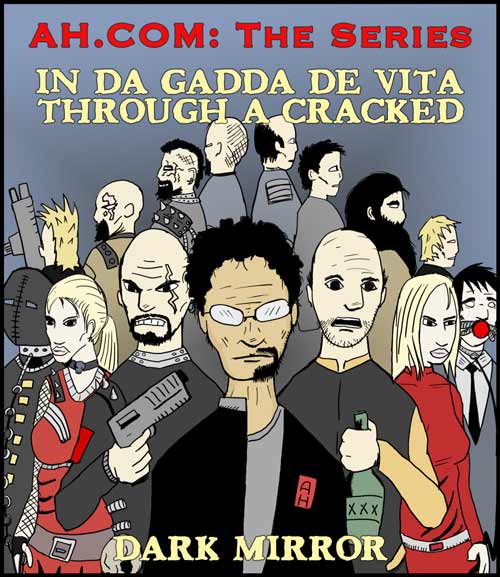 The AH.com ship arrive on a planet that seems to be a utopia - complete with airships! The crew go down to the planet for much needed R & R. Alas, unbeknownst to them, the Mirror AH.Com ship has also arrived at this world. The Mirror Crew go down to cause their usual mayhem and chaos and, by an amazing coincidence, happen to go to the same hotel that the AH.Com crew are staying.

The Mirror Doctor What sabotages the AH.Com ship and the ship's A.I. LEO, but is knocked unconscious before he can take over the ship while the real Doctor What manages to escape from the Mirror AH.com ship by using the brillant ploy of shouting out 'Look! A naked Alyson Hannigan look-a-like! Bouncing on a trampoline!' on a group of Mirror crew attempting to capture him and escaping when all of them turn around to look.

The title is based on the title of an Iron Butterfly song ('In the Garden of Eden') and the fact that virtually all 'Mirror Universe' episodes in Star Trek had the word 'Mirror' somewhere in their title.