LIFE, EVERYTHING, AND THE PUB IN THE HUB 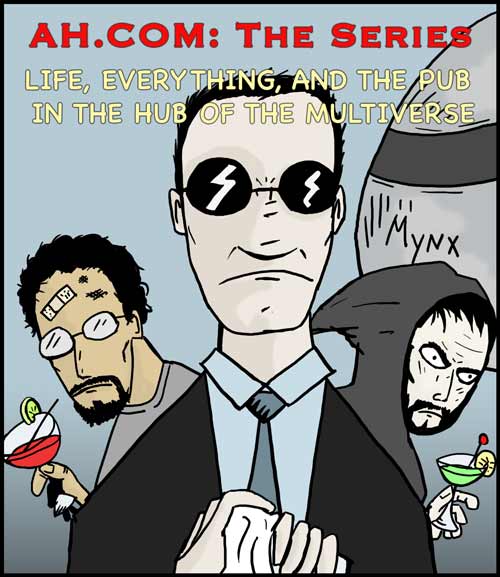 Psychomeltdown has invented a way to minaturize the Shift Engine so that it could fit into a shuttle. This–in theory – will allow the AH.Commers easier access to different timelines as they will no longer be dependent on the AH.Com ship itself. It requires one final test and Doctor What - much to everyone's amazement - volunteers to be the test pilot.

Meanwhile, back on the CF.Net ship, Gedca has made a similar discovery and Grimm Reaper has volunteered to be the test pilot.

The tests occur but due to an extremely unlikely coincidence - later calculated by LEO to be one point seven eight three to ten to the power of seven million nine hundred twenty one thousand seven hundred and forty six to one against (approximately)- the two different testpilots in two completely different universes opened up a vortex in the exact same spot at the exact same time. This resulted in the two shuttles vanishing and seemingly being lost forever.

In fact, the two shuttles ended up crashing into the Pub Ouroboros ('The Pub in the Centre of the Multiverse'). There, Doctor What meets the enigmatic bartender Ian for the very first time.

Ian explains to Doctor What just what the Pub and the Hub are, what are the Rules in the Pub and how it is possible to reach the Pub without having to use a Shift Engine (entering a door marked 'Authorized Personnel Only' that can be found in many pubs).

While Doctor What is processing all this information, Grimm Reaper appears. He and Doctor have a battle that is cut short due to the actions of Ian who breaks up the fight with a simple 'warning'. Ian gives Grimm Reaper and Doctor What coordinates back to the Pub. When Doctor What complains that it would be dangerous to give the CF.Net crew the information, Ian explains to him the primary Rules in the Pub - “This place is open to all— no exceptions. But no fighting here. EVER.”

Doctor What and Grimm Reaper return back to their respective ships, much to their crew's relief and amazement and (in Grimm Reaper's case) shock and fear.

The Hub, the Pub and Ian will make frequent appearances in subsequent AH.Com episodes, including HUB(RIS), DRY DOCK, and GENDERBENDER MIRROR, to name just a few.

This story was criticised for its lack of action, and large amounts of exposition. This was explained as necessary to explain the concept of The Hub.