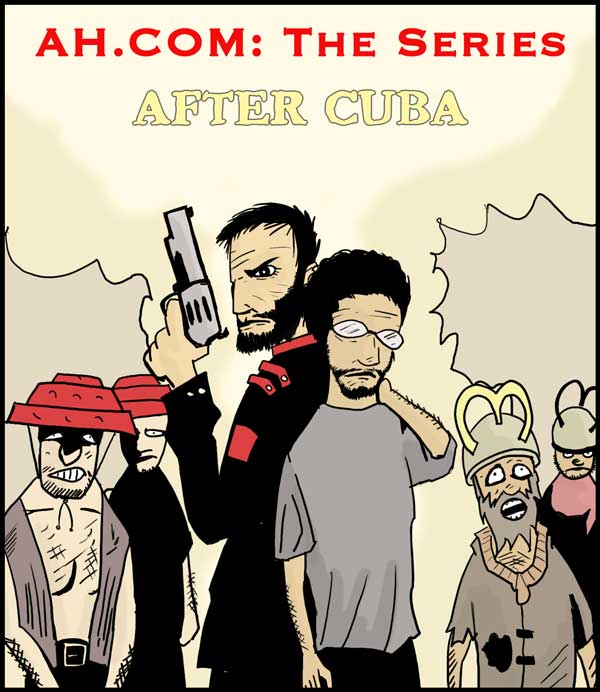 The AH.com Ship visits a timeline where the Cuban Missile Crisis resulted in a nuclear armageddon, wiping out the entire First World and China. Now it's a hundred years later and the major powers are Brazil, South Africa and India. However, all the action in this episode takes part in the desolate post-nuclear wasteland of Utah.

The AH.commers meet a tribe of post-apocalyptic cannibals who worship McDonalds, and have holy wars with their Pizza Hut-worshipping neighbours (an idea loosely inspired by the role of Taco Bell in the film “Demolition Man”). The cannibals are led by ATL versions of N-reD, DraconisNoir and redrover, but are ruled by a child 'Elder'. Not for any profound reason, they just can't count the years of his age.

However, the AH.commers learn that the CF.netters are also around, and are selling the primitives plasma cannons, disrupting the balance of power. (This was an early episode when it was assumed the AH.commers were operating under a non-interference directive). Ward sends fortyseven, FederationX and Gedca to attack Straha in the AH.com shuttle; Straha beats them off, but the shuttle is damaged and won't fly. When Doctor What calls Hendryk on the ship for backup, Hendryk doesn't believe it's the real Doctor What. The AH.commers have to find another way out of this.

Most of the AH.commers disguise themselves as Pizza Hut worshipers and go to buy plasma cannons from the CF.netters, but Grimm Reaper recognises Psychomeltdown's voice and a firefight breaks out.

Meanwhile, Landshark and IronYuppie go to find the McDonaldites mysterious 'source of power'. This turns out to be a Successful Sea Lion. Landshark uses it to recharge the shuttle's power and they rescue the other AH.commers. IronYuppie takes the three McDonaldites prisoner and keeps them in her dungeon on the AH.com Ship as playthings.

The episode ends with the revealment of a mysterious bioengineering project that Doctor What had had Thande and Torqumada working on throughout the episode - however, thanks to a typo, they've engineered thespian Paris Hilton clones.

The McDonaldites later show up in other episodes.

The world of After Cuba would later be revisited in HAVANAGEDDON.

There's also a comic based on this episode (or the beginning of it, at least).

Thande's first (proper) episode. Still a personal favourite of his.