The primary setting of AH.com The Series. A large, powerful, but rather beat-up and undercrewed Multiverse Exploration Ship (MES). The correct name for the ship is 'the MES AlternateHistory.com', but everyone just calls it the AH.com Ship. 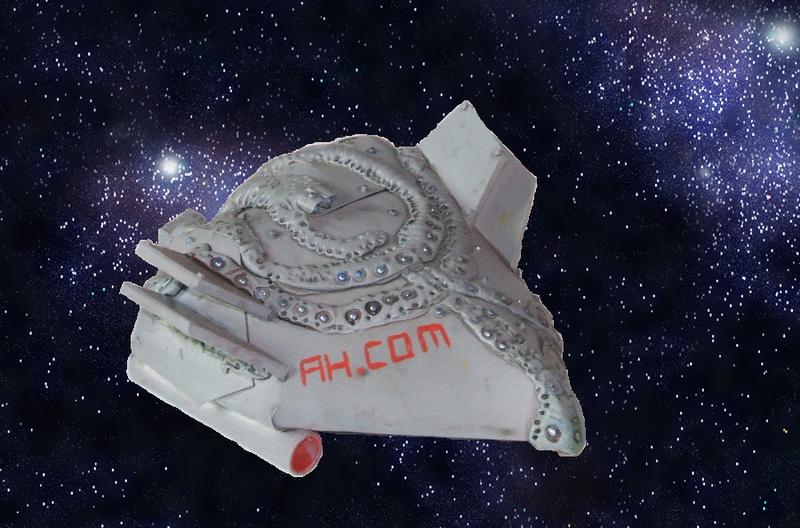 The MES AH.com in space…

The AlternateHistory.com was originally, along with two sister ships, the CounterFactual.net and the AlterVerse.net (referred to as the CF.net and AV.net ships, respectively) built by the Neanderthal Multiverse Empire. The ships were captured by Admiral Ward of the Human Unity, a timeline being invaded by the Neanderthals, and turned against their builders.

During a climactic battle with the Neanderthals, or Bastards as the Unity Earth people called them, the AH.com's crew was mostly killed and two inexperienced scientists, Doctor What and Grey Wolf, were forced to take command. Believing the battle lost, What ordered the ship to flee, earning him the lasting enmity of Admiral Ward, the commander of the fleet and of the flagship CF.net. 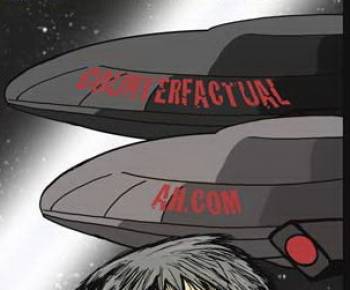 The MES AH.com and MES CF.net, as they appear on the title card of the episode OF SHIPS AND CAPTAINS.

The AH.com Ship layout includes a large bridge, a conference 'war room' let into it (and also a rarely seen Ready Room). The decks are possibly lettered rather than numbered. The engineering room is often featured, being the domain of Dave Howery. The Shift drive, running on unobtainium, is housed here.

All crew members have their own quarters, as the ship is undermanned. A large Sheepist Temple caters to the spiritual needs of the Sheepist crew members, while Othniel maintains a Christian chapel on Z deck between a cinema and a swimming pool; no-one else has ever managed to find this deck.

Other rooms include Torqumada's sickbay, Thande's chemistry lab, a large computer room housing the huge sphere that is the central computer brain of Leo Caesius, the transporter room manned by G.Bone and several large cargo and hangar bays. The latter is home to the AH.com Ship's virtually inexhaustible supply of shuttles, most of them named after female actresses or Doctor What's cats. Recently an admiral's suite was uncovered and is currently inhabited by Flocculencio. In it one can view security footage of almost anywhere on board, and also remote-control the teleporters.

The design of the AH.com Ship, despite much debate, has yet to be finalised. Psychomeltdown advocates a ship design reminiscent of a larger version of the Ferryboat Liner spacecraft from Star Wars, but with a rust-brown colour scheme. Recently MrP constructed a model based on Psycho's description, though grey in colour (see image at top of page).

The ship is very large, but capable of landing on a planet (though this is rarely attempted).

The AH.com Ship is surprisingly heavily armed; despite being damaged and badly maintained over the years, it is after all originally a warship. The ship's weapons take the form of particle beams and missiles, though this sometimes shifts depending on who's writing the episode. The shuttles are only lightly armed and are not true fighters.

Two different future versions of the ship, both enhanced and enlarged, were seen in “AH.COM THE SORTA-KINDA-MAYBE NEXT GENERATION” and “A PRESENT FROM THE FUTURE”.