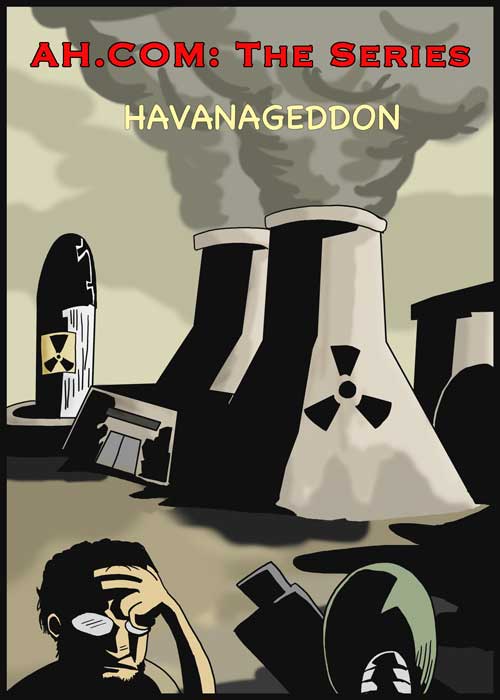 The AH.commers revisit the Earth featured in AFTER CUBA. They beam down to the New United Nations in Hawaii and meet the delegates, including Civiliser and alternate versions of Flocculencio and Othniel. They learn that the CF.netters are here, in Cuba itself - a blasted radioactive wasteland - and are helping a mysterious figure called Quatmin to rebuild a nuclear arsenal (forbidden by the N.U.N.). Ward sends a transmission demanding various items from the N.U.N., or else the CF.netters will launch a second nuclear holocaust - one from which the planet will not recover.

The N.U.N. turn to the AH.commers to save them, as none of the N.U.N. countries have the technology to safely cross radioactive Cuba. Doctor What gets Dave Howery to build a suit of three metre thick lead plates, but when that proves somewhat impractical, Thande instead creates an anti-radiation drug called Inadvisabline.

The AH.commers get to Cuba and fight off attacks by fortyseven, FederationX, Gedca and DominusNovus. They eventually reach the CF.netters' base and Doctor What hands over everything the CF.netters demanded (apparently, when the N.U.N. saw Dave's suit, they gave up all hope). Ward leaves and Grimm Reaper is about to abort the nuclear launch, when Quatmin reappears and shows that he is actually MerryPrankster, on a mission to destroy this America-less world.

The AH.commers do manage to stop the nukes anyway, but they explode on the ground; G.Bone randomly teleports them to the Ukraine just in time, and they just escape being cannibalized by Midgard when Ottoman cavalry under an alternate Abdul Hadi Pasha appears.

MerryPrankster was somewhat unhappy with his character's behavior (which seemed to clash with his earlier portrayals as one of the more moderate, sane members of the CF.net crew), and Thande himself disliked some of the changes to the episodes the EIC made, including altering the ending.

Thande's fourth episode for The Series and his last for Season 1.