A Present from the Future 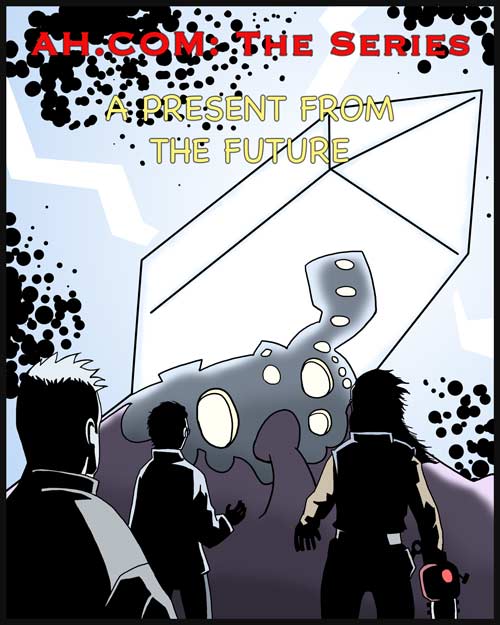 Trivia: Thande's second episode for Season 2 but actually the first one he wrote for it. The whole episode is an adaptation to AH.com of the Red Dwarf episode 'Out of Time' - even the title is actually the original working title of that episode. Thande did acknowledge this with 'apologies to Grant Naylor'.

The episode begins with a dream sequence, or nightmare sequence, in which Kit awakes after having had sex with N-reD. When he wakes up for real, he finds that Michael, Grey Wolf, and indeed everyone except Doctor What has been having nightmares. Investigating, they learn that there are a series of distortions in space surrounding an artefact giving off a great power signature. They decide it must be a defence mechanism of some kind, designed to put people off getting any closer.

After wiring the Crystal into the ship, Leo finds that it gives the ship much greater power and the ability to hop between timelines in a more controlled fashion. However, their amazement is cut short when another AH.com Ship arrives, looking rather like the one in AH.COM THE (SORTA-KINDA-MAYBE) NEXT GENERATION. It is not in fact the same, but also represents a future version of the AH.commers. After having used the Crystal to hop around the universe at will - and defeat a mysterious 'enemy' in a great war - it has finally run down and they want to use the present day AH.commers' Crystal to recharge it.

To avoid altering the timeline, Leo locks up the others and sees the future AH.commers alone, intending to wipe his memories afterwards. However, the others look on through the security cameras and eventually bust out. Leo finds to his horror that the future AH.commers are very different, almost the antithesis of the present day ones - and Doctor What has died. Some CF.Netters joined the crew after the war, as well, in which Grimm Reaper and Ward were killed.

The present and future AH.commers do battle, the futures winning - but every time they kill a present AH.commer, the corresponding future AH.commer vanishes. Leo realises that they have to destroy the Crystal now to ensure this future never comes to pass, but he is killed by future Landshark and IronYuppie before he can do it himself. Present Landshark and IronYuppie attack their future counterparts, holding them down long enough for Dave Howery to do it instead.

The episode ends with the future timeline being erased, and Howery momentarily vanishing from everyone's memories before reappearing. Ominously, though, in its original place in space, the Crystal has reappeared as fragments and has begun to reassemble…

The future AH.commers are the opposites of their present selves:

Hendryk is a Certified Russia Enthusiast who spends his time oppressing the Chinese;

Kit is a bald heterosexual in nylon clothes and married to Charlotte Church;

Leo Caesius has remodelled himself to look like Rick Santorum and is masterminding the presidential campaign of Ann Coulter;

DominusNovus, who joined the crew after the loss of the CF.net, has had a lot of plastic surgery but still believes himself to be ugly;

Dave Howery is immensely fat thanks to eating Canadian bacon, and is also the Prime Minister of Canada;

Landshark is a Dalek;

IronYuppie is the Borg Queen

Straha is an anti-marijuana legalisation campaigner;

Othniel is an atheist skinhead nutter

Matt and Weapon M are both hippy peace protestors.

We also learn that GBW died just after the war when he was set upon by members of the Dyslexic Bush Haters' Society.