IN THE LAND OF THE BLIND 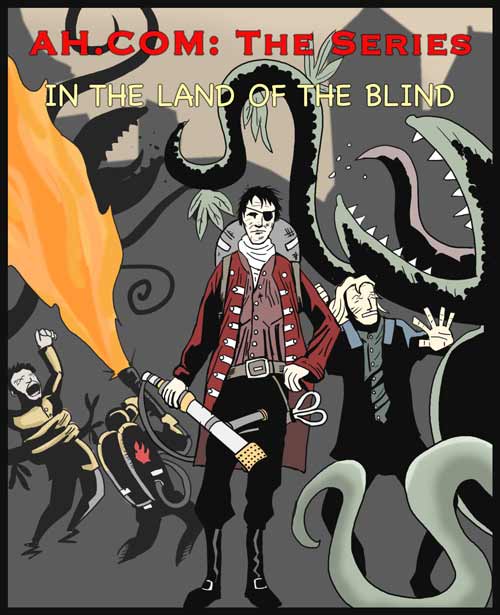 Straha gets his hands on some growth formula from Torqumada which he then uses to fertilize his hydroponics lab full of marijuana, with dire consequences.

Thande, being Thande, decides to get rid of his excess chemicals by dumping them into space, while they are in orbit around a planet. The combination of chemicals causes the population of the planet to go blind.

Straha’s pot plant mutates, becoming a terrifying creature that basically kicks the AH.commer’s ass. G.Bone manages to teleport the creature off the ship, but unluckily Landshark is also teleported away with the beast.

Landshark wakes up on a planet in OTL London, England, where he meets two locals, who he discovers are all blind. Landshark being the only sighted person in the place, becomes a King of sort, taking control and doing what he wishes.

Unbeknownst to him, the Plant Creature (Ganja Maximus) has also come through the teleport alive and well and is currently rising up an army of genetically modified plants to kill off all the humans.

The plants attack and Landshark leads the defense of his loyal subjects, sealing themselves off in the Whorin’ Quarter of the city, they battle the Plants and hope for the best.

GBW, being GBW, discovers what is going on. He finds out that Ganja Maximus survived and Landshark is on the planet fighting for his light against it. Matt (Mbarry), DMA, and Thande head down planet to spray a little Agent Orange upon the plants and rescue Landshark

Once rescued, Landshark has his eye regrown and all is happy go lucky.

The typos still continue, to this day.

The episode is a parody/tribute to John Wyndham's Day of the Triffids.