Of Ships And Captains 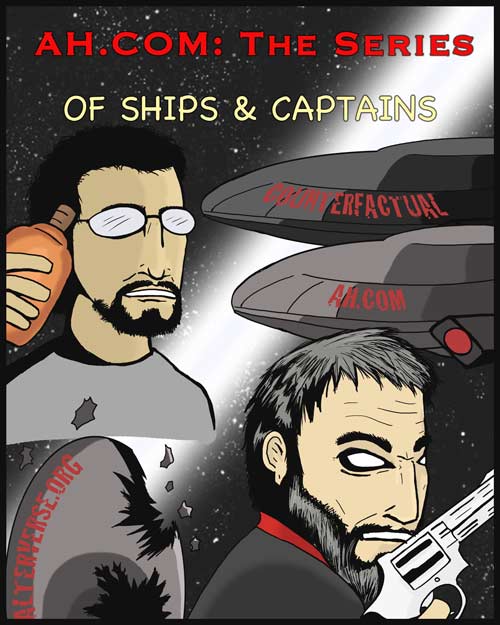 Trivia: This is part one of a two part season finale for the first season of the AH.com The Series.

The episode begins with a flashback to six years ago, where it gives the basic premise of a world invaded by a multiverse spanning empire and how the world united and fought them off, most of it due to the great hero of their time; Admiral Ward.

The episode is broken up with flashbacks of what occurred during this Great War against the “Bastards”, the invading force of creatures. We are introduced to how the AH.com and CF.net ships came to be and the first meeting between Doctor What and Ward, which was anything but cordial.

Ward is attacking a defenselss planet when something from his past comes into the universe he's in, causing him to flee and head to the Hub.

The AH.com crew arrives to a universe where there's only debris left of the planet that was Earth. They scan around and come across the wrecked hulk of a ship of similar design, the Alterverse.net.

Doctor What confronts Ward in the Hub Docks, where is he told that a creature from their past has come back to wreck devastation upon another universe. Although, Ward hates Doctor What, he enters into an uneasy alliance with him to destroy this Devourer that has come to claim another universe.

Ward introduces Doctor What to his allies in this endeavor, people who's own worlds were destroyed by this creature. Together they prepare for the upcoming battle.

The alliance of ships engage in battle against the Devourer, but they are outgunned and badly damaged. The AH.com loses weapons, shields, and any ability to defend itself or attack, they have also lost track of the CF.net, unsure if they've been destroyed or not. Doctor What orders a retreat.

The CF.net has not been destroyed, but they too are badly damaged, but with enough systems intact to see that the AH.com ship has fled.

Its history repeating itself as Doctor What and the AH.com ship flees, leaving Ward and the CF.net ship to battle the creature alone. It is also the reason Ward hates Doctor What so much.

The AH.com ship arrives to a seemingly peaceful universe and begins repairs.