“Sealion” (named, of course, after Operation Sealion) is a small plush sealion purchased by Doctor What who commenced a round-the-world trip in July 2006. His ultimate destiny is to be presented to the Overlord (praise-his-dark-name). It was often joked: At the current rate of travel (especially since mid-2008, about when he entered Germany), the Overlord will probably be presented with Sealion at his graduation ceremony. Or possibly his son's.

Sealion has shown a distinct tendency for exciting cats, no matter where he is in the world. So far he's been to Ottawa, various places in Michigan, Iraq, Idaho, Wyoming, California, South Carolina, New York City, Istanbul, Sheffield, Manchester, Chatsworth, Hull, Scunthorpe, Doncaster, Ystrad in Wales, Congleton in Cheshire, Cambridge, Cardiff, several places in Germany and Austria, France, China, Norway, Denmark and Brazil. While he was in Brazil, he ceased being nameless, as Brazilian AH.commers dubbed him “Silas”. He's been known under that name ever since, in addition to his original generic name. Silas had recently finished his world tour and is currently in Ottawa at Doctor What's place, finally back home.

Sealion has been accompanied by a little black notebook since the start of his travels in which each person who hosts him handwrites a little message about or for him. During his stay with Sargon, a world map was added showing the locations and members Sealion has visited and stayed with so far, and he also gained a new travelling companion called Snowy, who is a little white seal that Sargon added since he felt that Silas the Sealion would appreciate a friend to accompany him.

Silas the Sealion to the right, his little brother Snowy to the left 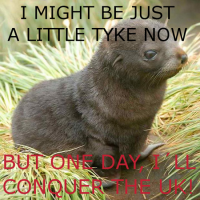 Snowy the Seal - The pal Silas eventually gained on his travels around the world.

Sealion World Tour - A detailed overview of Silas' tour around the world.

Who's Who of ASBs - A tongue-in-cheek list of the most often reccuring Alien Space Bats characters. Meet the annoying but cute chiropteran pals of AH.commers !