Cult Of The Swamp God 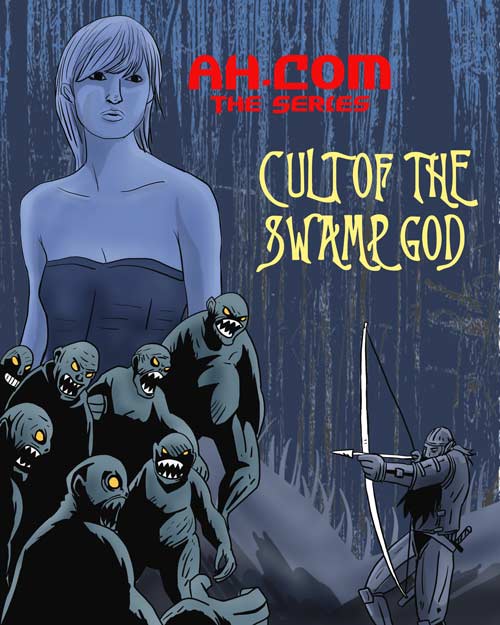 Trivia: Episode 2/33 of The Series, written by Dave Howery, his 8th contribution. The episode famous (or infamous) for introducing Keira Knightley as a guest star on the show.

The episode begins with the AH.com Ship and CF.net both appearing on the same timeline, and preparing to slug it out, when suddenly several members of both ships are teleported off by persons unknown. The missing AH.com members (Doctor What, Torqumada, Flocculencio, IronYuppie, and Dave Howery)wake up on the planet below, and find themselves dressed up in the clothing and weaponry of a party of fantasy adventurers.

Some investigation by the crew still on ship reveals that they are in a timeline where the Earth was massively terraformed to create a fantasy roleplaying world, complete with underground factories making real living monsters, 'magic' items, and pseudo-medieval weaponry. The party finds that they are supposed to investigate and put an end to a cult that worships an evil frog god in the town of Rana; they find an altered MerryPrankster there playing an innkeeper.

They quickly get involved in a brawl with several monsters that belong to the cult.. and triumph through skill, courage, and dumb luck. A second encounter minutes later puts them up against several cultists who are intending to sacrifice a young pretty countess… who turns out to be a copy of Keira Knightley. Naturally, Flocculencio charges right in to save her, but gets sidelined by a giant frog. With a lucky bow shot, Dave Howery ended up killing the priest (played by Romulus Augustulus) about to sacrifice the poor girl.

To everyone's shock and horror, it turned out that Keira was mentally programmed to fall in love with whichever character killed the priest and saved her life… which happened to be Howery. So…. Dave ended up with an all-too-grateful Keira Knightley in his arms. The next day, the party found their way to the cult's cave lair, and after a brisk fight with a squad of frog men and DominusNovus, they entered the cave, for the final encounter. IronYuppie was briefly swallowed whole by a titanic frog, but cut her way out.

The final battle was against a hideously altered and powerful Ward, who nearly took out the entire party, but was killed by Flocculencio backstabbing him. The party was then transported back to Rana, along with the CF.net people. There, E. Gary Gygax (EGG), the creator of the Adventure Planet, revealed that a computer glitch had caused the crew from both ships to be hijacked into the game, and all was settled. EGG allowed the party members to take one item each from the game, as a partial repayment for their trouble. Dave Howery, though, seemed to have cheated.. he used a magical bag to sneak Keira away from the planet… and she is now his paramour on the ship.

Keira Knightley became a recurring character on the Series, and a direct sequel to this episode, KEEP OF THE ICELORDS, was written by Dave for Series 4.

This episode was one of the author's favorites, due to his misspent youth which was heavily into D&D. Strangely enough, none of the readers seemed to mind that the author had the audacity to give himself a pretty young actress as a girlfriend.