Ran Exilis is one of the Dutch members of AH.com. It should be noted that Thande appears to find his nationality so extraordinary that remarks upon it at every available opportunity. He is a lot more active on CF.net these days, and is actually a moderator on that site.

His most notable feat is the creation of the Official Pics-of-Gorgeous-Women thread, with which he pretty much proved himself as a champion of the Heterosexual Reconquista.

Ran is well known for his slightly perverted, yet limitless love for beautiful young women, and particularly Oriental women (specifically Iranian women, although he considers Arab, Turkish, Armenian, Coptic, Assyrian, Chaldean and Kurdish women to be amazingly beautiful as well).

In fact, Ran is said to be unnaturally obsessed with anything female, ranging from furries to unmarried female board members. He is also rumoured to scour the Members List for possibly female members and add them to his buddy list whenever he feels the dark desire to do so…

His facial hair means Ran bears a spooky resemblance to the Dutch painter Van Dijk, and the shaven-headed Flocculencio has also challenged him to a Cavalier/Roundhead rematch.

Ran is quite appreciated for some of his qualities and achievements; for example, Thande has awarded him for the creation of the now legendary Official Pics-of-Gorgeous-Women thread by bestowing the Order of the Heterosexual Empire with Copper Starburst and Maple Leaves upon him. *Link

For a while, Ran was stalked by a Buddhaspammer.

Ran is and MP and a member of the EVIL Party and is the current Minister of Moral Corruption of AH.com, which is entirely appropriate.

He is also the Protector of the AH.com Protectorate of the Western Sahara where he manages huge amounts of beach property suitable for huge and wild parties, which he is also in charge of organising.

However, Ran is also known to be notoriously creepy, and his level of creepiness greatly exceeds those of the average stereotypical, love-starved, sexually-deprived, ditto perverted, acne-ridden, randy American teenage nerd. For this he has been appointed unofficial King of the Creepy Hetero Teens. (Although Azardin has argued that as he is not a Teen himself, he should be given the Roman title of Tribune of the Creeps).

In fact, it is Ran's extreme levels of übercreepiness that is one of the more important reasons that made The Bald Imposter give up on the noble cause of the Heterosexual Reconquista, saying that he “feels more comfortable with the joyous gay banter of the gaysexuals than with the hormone-driven creepiness of the average member of what the Reconquista has now become”…

Ran has had a number of minor roles in AH.com The Series and AH.com Wars, most notably as a henchman of Justin Pickard in HAIR TODAY, GOTTERDAMMERUNG TOMORROW. This became a more major recurring role when he reappeared, still a prisoner of the Germans, in CITATION NEEDED.

Ran designed himself a standard, combining (some of) the flags of the countries whose women he likes: 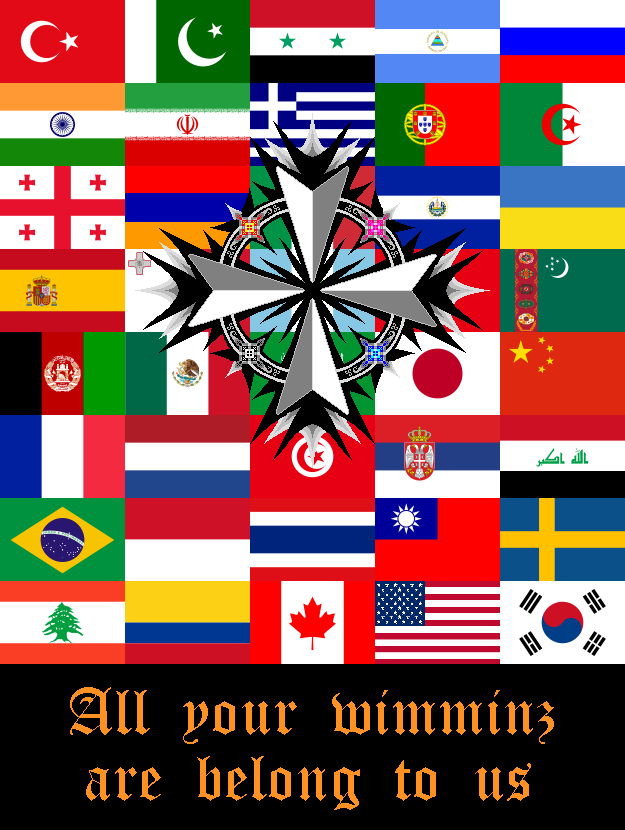