An African territory disputed between Morocco and the Sahrawi Arab Democratic Republic with the Polisario Front Independence movement. It is a burning issue in the region and not just due to the heat either. As such, it has come up for discussion in the political part of the Chat section.

It has also become a political battleground between Algeria and Morocco, and their strained relations have been worsened further. This is also why the once-serious question of Maghrebi unification has been shaky at best in the recent years. Algeria, supporting Polisario (the organiser of the Western Sahara Independence Movement), has harboured thousands of Western Saharan refugees fleeing Moroccan occupation in Tindouf. The UN has supported independence for the country, but Morocco has not done anything of note.

A map of Western Sahara is shown below:

Acting President Sargon decided that'd we'd had quite enough of all the disputes over the area, and decided to end the bickering by taking over the region. Thus, on the 1st of February 2008, he considered it a candidate for annexation, and on the 24th of February 2008 issued an AH.com Presidential Declaration doing so. Ran Exilis was appointed Protector of the new AH.com Protectorate, and is expected to organise a massive beach party for members seeing as the place has a huge coastline with lots of nice nooks and crannies to have fun in.

Party entertainment is supplied by Movie Nights. Probably by showing Caligula, Mile High and other such items.

As usual, we have a satellite image from the Admin's orbital platform: 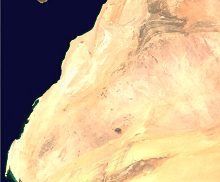