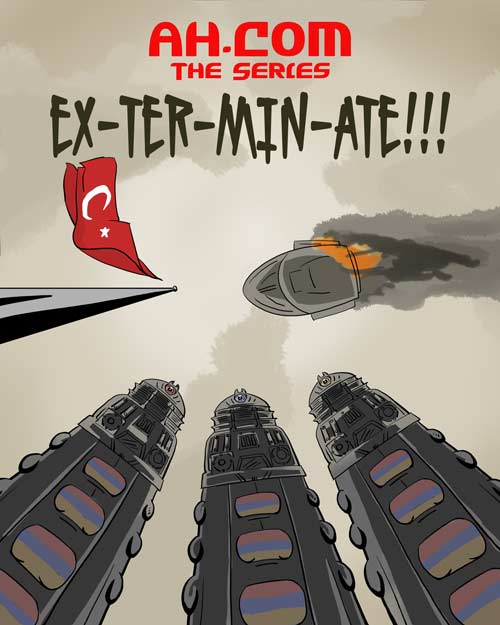 Trivia: This episode revived (or reminded people of) the long-forgotten feud between Abdul Hadi Pasha and Rafi Issoghlian.

The episode begins on a battlefield in the Ottoman Empire. Something that cannot quite be seen is pursuing a Turkish soldier. It corners him, and screams “The Turks EX-TER-MIN-ATED my people!” before killing him with an energy burst.

The AH.commers arrive in the TL and are horrified to discover a powerful crosstime army encamped on the planet below. They're relieved to discover that it is not the CF.net or an ASB. They attempt to eavesdrop on the mysterious invaders' communications, only to be attacked and severely damaged by two saucer-like craft.

Landshark manages to bring the craft in for a landing in the grounds of the Topkapi Palace in Constantinople. They're brought before the Sultan, who is an alternate of Abdul Hadi Pasha. Kit is overjoyed to see his former lover, and is disappointed to discover that this one is heterosexual. The Sultan orders them put under house arrest in the palace while he decides what to do with them.

In the opulent guest quarters, Doctor What and Grey Wolf discover that in this world, there was no War of Spanish Succession. Instead, the French and the Ottomans divided Europe between them–the French expanded to their “natural borders” and took most of Italy, while the Ottomans took Sicily and Naples.

In the meantime, Psychomeltdown spies Alyson Hannigan in the Sultan's harem and with the aid of Othniel and Straha, plots a rescue mission. Using stolen Janissary uniforms, they're successful in infiltrating the harem, but Straha's attempt to seduce the huge black concubine Sheba, the Giantess of the South gets them all arrested by Floid, one of the Sultan's eunuchs.

Doctor What and Grey Wolf are brought before the Sultan, who informs them of his plan to castrate the three miscreants and sell them into slavery as eunuchs. Doctor What bargains for their safety by offering AH.com assistance in defeating the crosstime invaders, who have since been revealed as the mysterious Rafeks. Doctor What and the Sultan decide on a plan to teleport the AH.commers and a nuclear warhead inside the Rafeks' heavily-shielded base at Ani and detonate the bomb inside the shields.

Leo_Caesius successfully teleports AH.commers (along with Othniel, who was apparently released for not actually attempting to sleep with one of the concubines) inside the Rafek complex, but the Rafeks–Dalek-like creatures with the Armenian tricolor–quickly discover them. The Rafeks, like the Daleks, have bullet-dissolving fields and the AH.commers are forced to retreat. They flee into a church, only to discover a black Rafek serving communion to hundreds more. They manage to kill a Rafek that was going to give away their position and flee into the church's basement, where they think they're safe.

Unfortunately for him, that timeline's Ottoman Empire invaded Armenia and began a systematic campaign of genocide. In order to protect himself, Rafi had his brain transplanted into a robotic body by some Kurdish gangstars. The Kurds betrayed him, forcing him to serve as an R2-D2 like astromech droid.

Rafi got the better on them and stole a crosstime saucer. He outfitted his new body and new ship with weapons and went about rescuing alternate Rafis in similar positions. He soon had a vast army of Rafeks and decided to go from timeline to timeline, destroying the Ottoman Empire wherever it exists so that the genocide would never happen again. When Othniel objects to Rafi's extreme methods, the Emperor orders him killed.

The AH.commers are saved by the intervention of a Hugh Hefner-like alternate Doctor What, who arrives in a TARDIS-like time machine. His squad of lesbian (or possibly bisexual, as it's hinted that he sleeps with them as well) ninjas decimate the Emperor's bodyguard, but the Emperor is able to destroy the detonator for the Ottoman nuclear warhead. The Emperor dares What to manually detonate the bomb and thus kill himself and his friends along with the Rafeks, but the alternate What manages to freeze time. He depresses the manual-detonation button and gets the AH.commers to safety. When they're out of Ani, the alternate What unfreezes time and the bomb detonates. Ani is destroyed.

The Ottoman army quickly moves to take advantage of this, and the Sultan releases Straha and Psychomeltdown. Leo has repaired the ship sufficiently for them to return to the Hub. The alternate What disappears along with his ninjas, and the AH.commers leave.

The episode ends with the Sultan, having destroyed most of the remaining Rafek bases soon after the destruction of Ani, attempting to force himself on an Armenian concubine. She runs away and pulls open a closet door to reveal a badly-burned Rafek. It screams, “YOU DID NOT GET ALL OF US, YOU TUR-KISH BAS-TARD! EX-TER-MIN-ATE!!” and kills him.