For Queen and Country 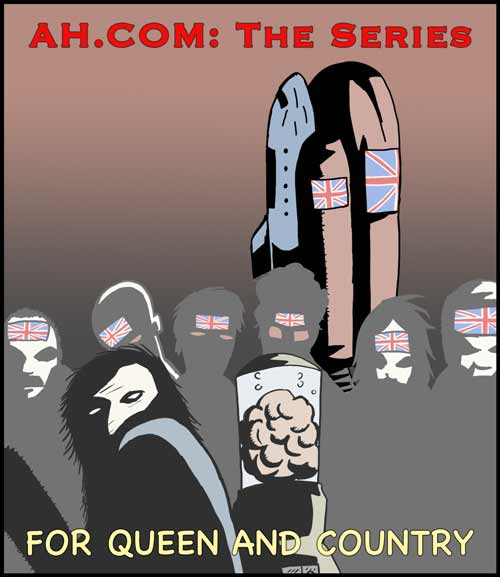 The Ah.commers arrive to a world dominated by the British. They are invited to be guests of the Queen, as always, trouble ensues…

Doctor What and crew head down planet to meet and dine with the Queen of the British World Empire.

Matt (MBarry) and Psychomeltdown go down planet to find genetic material of Alyson Hannigan to make a clone.

Dave Howery goes down planet, after being explicitly told not to.

G.Bone, GBW, and Leo Caesius are to remain on ship, to all their disappointments.

The crew that meets with the Queen get infected with a virus that makes them almost mindless zombies, Brit Faced. Psycho and Matt get chased by a group of madden Brit Faced folk from a church. Dave Howery gets chased by a horde into an alley, where he pulls out his chainsaw and chases the horde.

Justin Pickard manages to lead Dave Howery, Matt, and Psychomeltdown down to the abandon Underground, where he informs the three of what has happened.

Meanwhile, the Queen has launched a shuttle to capture the AH.com ship, using other Brit Faced zombies and the captured and turned crew. G.Bone and GBW try to fend them off, but to no success. GBW is injured and tells G.Bone to flee. Leo Caesius tells G.Bone to download him into a Robotic body that was being created for him, G.Bone complies, but it seems the robotic body was used to make a still. All that is left is a head, which G.Bone downloads Leo Caesius into, just as the boarders arrive.

Matt, Justin, Dave, and Psycho launch an attack upon a underground bunker that is emitting strange energy readings. psycho is used as bait as the others attack the fortified position. Moments later a horde of Brit Faced zombies attack, forcing Matt and Justin to fight them while Dave is sent to destroy the Brain Trust that is causing the zombification of the infected. Dave gleefully destroys the Brain Trust.

G.Bone attempts to shoot Leo Caesius, for without him the Ah.com ship could not be used, but it clicks empty as it was previously emptied into a sex bot that said a little too much. Just as the invading zombies are going to attack G.Bone, the Brain Trust is destroyed and the people are freed.

First appearance of Torqumada's pet brain in a jar, Bobo.

First appearance of Justin Pickard in the series.