A character…of sorts…in AH.com The Series. Bobo is one of Torqumada's medical experiments. The concept was invented by Psychomeltdown in Season 1 episode FOR QUEEN AND COUNTRY, but since then Bobo has appeared in several other episodes.

Bobo is a living disembodied brain with tentacles, whose description has often been deliberately vague but sometimes also has the ability to fly. He speaks (by some unknown means) in a disjointed, Bizarro-like fashion, always referring to himself in the third person. He is fiercely loyal to Torqumada and has been known to viciously attack anyone whom he perceives as trying to harm Torqumada. Later on he also became somewhat protective of Keira Knightley, who he refers to as “nice woman”.

In recent episodes Bobo appears to have struck up a strange sort of friendship with the Mosquito. 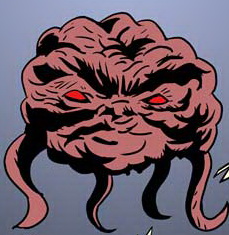 Bobo from the front, slightly pissed off
(title card illustration courtesy of Psychomeltdown) 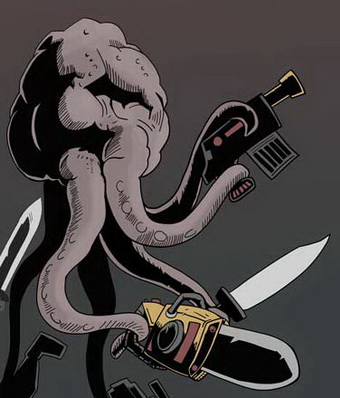 Recurring Characters from AH.com The Series