Give Me A Tall Ship 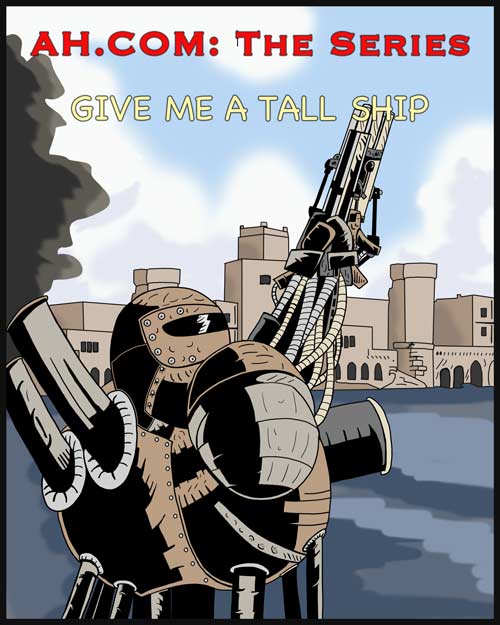 Series' site link (currently out of order due to technical problems)

An episode with a piratical theme. The AH.com ship is chasing the CF.net through different universes; Ward successfully diverts their attention by firing an 'A.S.S.H.A.T.', some sort of timed superbomb weapon, at the Earth of one timeline and then escapes, knowing the AH.commers will have to stop and disarm it. It is noted that this planet is still on eighteenth century levels of technology and culture for no obvious reason, even though the modern countries are the same as OTL. (See below)

They eventually retrieve and disarm the A.S.S.H.A.T., and Dave Howery leaves the Americans of that TL with plans for steam mechs with which to conquer Canada.

This timeline was mentioned again in ROCKET RANGERS, when Ian tells Doc What that the technological stasis was caused by ASB interference.

The A.S.S.H.A.T.s were later retconned as the weapons used in ONCE MORE INTO THE BREECH, replacing the reference to Ender's Game there.