Once More Into the Breech 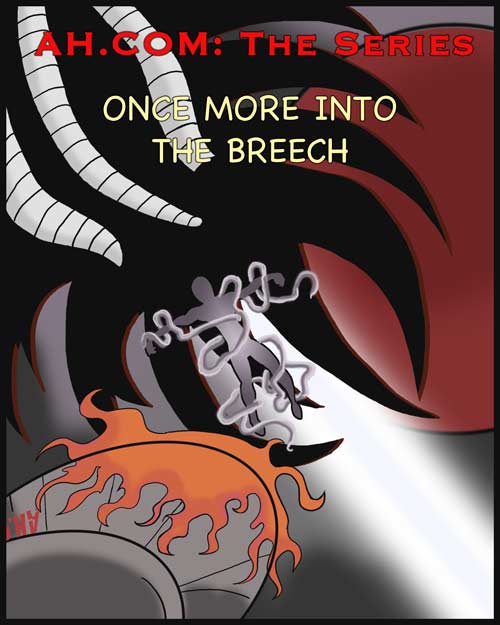 As in the previous episode, this episode is broken up with flashbacks into the past, telling the story of how the AH.com ship and the CF.net ship came to be.

The beginning opens upon the devastated CF.net ship, after its first fight with the Devourer of Worlds. Ward renounces his rank of Admiral and Grimm Reaper gives Ward slides for his infamous slideshow.

The episode begins with the AH.com ship beginning repairs upon their vessel after the fight with the Devourer. They are contacted by the United Imperial Earth, which controls the planet, and are boarded.

The CF.net also equally damaged, manages to get its shift engines working and uses a hidden tracker in the AH.com ship to find them.

The AH.commers manage to hold off the UIE soldiers, but with some casualties.

Dave Howery and Psychomeltdown try to get the engines back online, but due to the attacking by the UIE the reactor begins venting theta radiation. Knowing that the core could blow if the radiation is not vented, Psychomeltdown volunteers to manually vent the radiation. He does so, but is poisoned by it.

G.Bone is put in charge of getting Leo back online.

Weapon M and Thande are assigned to get the particle cannons working and manage to do so.

With their cannons back online, the AH.com ship manages to destroy the boarding UIE ships and repel the boarders.

Then they notice that the Devourer has followed them to this universe.

A moment later the CF.net arrives, attacking them. Ward has come back for revenge.

Doctor What manages to get Ward to see that they have a bigger worry on their hands. The AH.com ship and the CF.net ship call a truce and begin repairing, spare parts being offered up the AH.com ship to the Cf.net ship.

With basic repairs done, the ships prepare for battle. Both ships have damaged launch tubes so the MD device that was used to destroy much of the Devourer's fighter escorts cannot be used, and the Teleportation Tubes are down and it can't be teleported in.

Doctor What comes up with a plan, using a small ship they have, his loads the weapon onto it and pilots it toward the Devourer, while the AH.com ship and the CF.net ship draws the attention of the creature.

The fight begins and the AH.com ship is damaged by a massive blast from the Devourer, the CF.net manages to place itself before the AH.com and the Devourer just in time to save the vessel from being destroyed. The CF.net ship then fires off a last blast from it's main cannon, destroying the last of the Devourer's defenses.

Doctor What does not escape unscathed, his ship is hit and set adrift. The Devourer begins to make repairs and Doctor What decides to activate the bomb and kill the creature before it can complete its repairs.

With a tearful farewell, Doctor What pilots his small ship to the Devourer and sets off the bomb, straddling it in the last seconds.

There is a memorial service given by Hendryk, with Ward in attendance.