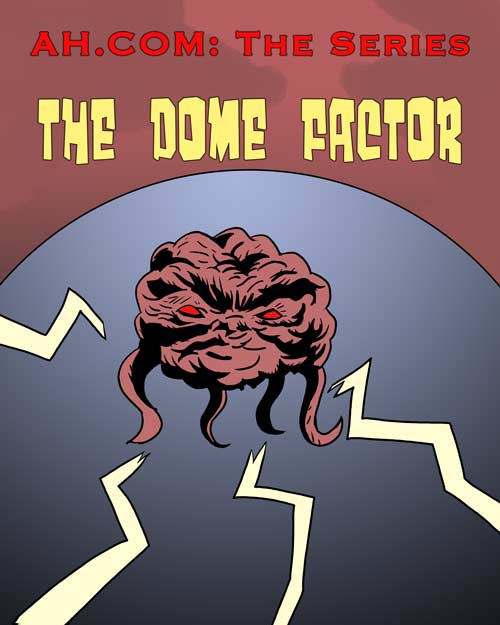 “The Dome Factor” takes place on the fabled world of Mosaic Earth 1. The AH.com Ship accidentally shifts to this timeline and, because of the constantly shifting mosaic'd, ISOTing countries below, cannot shift away safely. GBW takes charge, having mysterious knowledge about this world, and the AH.commers travel down to the nation of Yamania, in Antarctica.

From the Yamanians (who keep shifting to slightly different versions as the ISOTs continue) they learn that the source of the disruptions is a mysterious dome near the South Pole. Any attempt to travel there will be difficult, though, as the area is under attack by techologically advanced lizard-men from Tasmania. The AH.commers eventually clear a path by having Thande and Torqumada use their skills to super-power Bobo into a giant flying brain of death. Although wounded by the lizard-men's energy weapons, Bobo survives and buys them enough time to break into the Dome.

GBW and Doctor What manage to disable the Dome. Not only does this stop the Mosaic shifts, but it also cuts off the power supply to the lizard-men's weapons and they are forced to surrender to the Yamanians.

The AH.commers depart, having saved yet another world…