This page provides an overview of all technology and devices appearing in the AH.com Enterprise series. As with the technology of AH.com The Series and AH.com The Next Generation, these fictional devices often tread a delicate line between serious SF and jokey technobabble. The devices on this list are sorted in alphabetical order.

A slightly oversized device, somewhat resembling a cross between a handheld powered mining drill and a small rocket launcher. While definitely a tool first and foremost, it can also be utilised as a rather powerful weapon. It uses flurries of highly condensed heated air to burrow or drill through various materials. The device is powerful enough to punch a few holes even in very dense and hard bedrock. KING OF THE UZBEKS owns one, tucked away in his Chief Engineer special equipment locker. His reasoning for owning one ? “1. I'm always crazy-prepared. 2. It's such a cool gizmo !”

Specs with various sensor-related tech goodies and readout overlays. Seen among some of the crew members, especially MES-1 Allohistory's Fourth Mate and Junior Science Officer LSCATILINA, who wears them with pride. ARS-s can interact with dataspikes and other data-gathering portable devices and handheld sensors.

Almost the same as the classic BFG, but in the form of a pistol and with slightly less numerous integrated weapon systems (due to the smaller size). The acronym translates to “Big Fenkin' Pistol”.

Worn and utilised by ZELDAR for stealthy incursions into hostile territory, the suit allows for near-perfect camouflaging with the surrounding environment. It's not always fool-proof, but can nevertheless greatly increase the stealthiness of its wearer, especially during broad daylight.

On the rare occassion that the ship AIs need to travel along with the crew or at least interact with them more directly, their consciousness can be donwloaded into a simple, autonomous robotic pod. This is as close as the AIs get to having a proper physical body. In the era of the MES AH.com, its AI - LEO CAESIUS - would occassionally use an early form of cyberpod, a steampunk-themed android body.

Also called “computer spikes”. A dataspike is a small portable device that can be plugged in or brute-forced into an adversary's computer terminal and then be used for distant data transfers and data manipulation by an MES's on-board AI. Dataspikes can also interact with portable devices, such as Nanotech Multitools (though only to a limited extent) and Augmented Reality Spectacles (a particularly effective combination).

These are egg-shaped metallic devices similar in appearance and use to hand grenades. They are only available to the highest ranking security personnel of The Hub, particularly the Moderators, IAN's immediate underlings. Flash-bans are intended to be used only in the gravest of emergencies, when The Hub is threatened by extremely dangerous enemy activities. Once activated and thrown to the enemy's feet, the flash-ban detonates and creates something similar to a small-scale ISOT, transporting the person into a specially created pocket dimension of the multiverse. This dimension is the infamous Coventry Zone, and serves as a sort of penal/exile dimension for people banned from The Hub. The construction and technology utilised by the flash-bans is kept strictly top secret, to avoid falling into the wrong hands. Abuse of flash-bans even by qualified staff is looked upon as a serious offence against the order and mission of The Hub.

A small multitool-like device used by the engineers and mechanics of the Twin Fleet. Thanks to built-in nanotech generators, it can change its shape and assortment of tools in a multitude of (but not infinite number of) ways. It also includes several types of diagnostic sensors. Can fit easily in a pocket or a small belt-mounted holster. Basically, the tool equivalent of the BFP.

Resembling a hi-tech pipe wrench, it is essentially the same type of device as the Nanotech Multitool, but is larger in size/mass, as well as heavier, and is used for maintenance or modification of larger devices and objects. While it works on the same principle as the Multitool, its size disallows easy concealment of the device, and it has to be carried in a holster, usually on a belt. Basically, the tool equivalent of the BFG.

Also known by the acronym NBL, this is a safety and security system put in place on the outside of the entrance to the room housing the Shift Drive of a shift-capable starship. NBLs are unlocked by oversized bike lock keys with a unique coded chip installed inside them. There are rumours that nuclear bike locks were a cost-saving measure, implemented on most newer shift-capable starships by both The Hub and Human Unity. The history of the nuclear bike lock's use can be traced as far back as the pre-interstellar era of a certain timeline, where it was used on submarines of a certain state on the British Isles.

A somewhat mysterious advanced tool, carried and wielded by ALEX RICHARDS, the MES-1 Allohistory's expert on multiverse cartography. The device produces faintly visible photonic waves that can be used for a multitude of tasks, most of them at least tangentially related to light-based physics. While working, the photonic paintbrush emits a sound not unlike that of a spray can with paint. In everyday use, ALEX mostly uses it for colouring blank maps and basemaps of ATLs quicker than he would by hand. He is hesitant to reveal the origins of the device, but maintains that its his own little invention and that it has a link to his previous occupation, from the times before he became a Hub employee and MES-1 crew member. The “photonic” has some drawbacks and limitations: It doesn't work with things painted black. The positronic emission scanner beams just get absorbed by the dye molecules rather than scattering to produce the required internalised 3D model necessary for calculation of the proper settings. For instance, “There's sable interference coming from the upper molecular stratum of the locking mechanism.”. Oh sure you could brute force it, but only in the same way that you could find a missing person by performing an X-Ray diffraction on every molecule in the known universe to find out which ones matched their DNA… Also, using the same 'colour' for a task leads to that one running out and causing problems (e.g. finding that you've run out of red midway through your escape through a few dozen blast doors in a Communist-themed ATL).

Highly advanced femtotech-technobabblyon energy generators, allowing casual faster than light (FTL) interstellar travel for starships, as well as the added ability to create "shiftholes" - artificially formed wormhole-like anomalies that can be used to travel between the timelines of the multiverse. On the MES type starships, it is common practice to have the Shift Drive room locked away with a Nuclear Bike Lock.

The sapient and (supposedly) helpful artificial intelligences of a starship's advanced computer network.

In the era of the MES AH.com, the ship's AI was LEO CAESIUS. The MES CF.net probably also had its own functioning AI, but its identity remained unknown throughout the course of the ship's travels.

In the era of the MES Stranger, the titular starship housed an AI known as ANALYTICAL ENGINE. 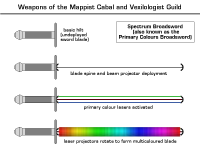 The Spectrum Broadsword, or Primary Colour Broadsword (PCB) is a hi-tech type of weapon unique to the military branches of The Mappist Cabal and The Vexilologist Guild. Though most of the melee weaponry used by these two mysterious factions is completely conventional, a select few of the factions' members apparently train with and wield PCBs. The weapon consists of a simple hilt with controls, a long thin rod that telescopically extends itself from the hilt, and of two sets of laser projecting devices - one set at the endpoint of the rod, and the other in front of the hilt's crossguard. Once extended and activated, the “blade” part of the sword starts projecting three beams of a cutting laser - a red, green and blue (RGB) beam. These eventually converge and meld into a whole spectrum of colours, becoming the dreaded Spectrum Blade. Spectrum broadswords have something of a reputation for fidgetiness, but in the hands of a capable combatant, they can be quite deadly, and hard to confront with most other melee weapons (including the Stunbats available to the Twin Fleet crews). Certain members of The Guild have customised melee weapons broadly based on the PCB.

Standard issue melee weapons for any crew member of the Twin Fleet (just like the BFPs and BFGs are the standard issue projectile arms). The name is an abbreviation of “stun baton”, as the weapon is intended to be used in a non-lethal (or some would say “less-lethal”) manner. While at face value, a stunbat seems just like any ordinary collapsible baton that is easily concealable in a pocket or holster, it is actually just as multifunctional as many other types of portable tools and weaponry available to the crews. This is due to the fact that the baton's extendible telescopic inner shafts are actually composed of a monomolecular tendril-like object, which can be charged and modified with a press of a few buttons on the baton's handle. The tendril, while deployed, is by default in basic baton mode, and it can be switched over to become a whip-like weapon, a staff-like weapon, a sword-like bladed weapon, an electric “cattle prod”-like apparatus, or even something in the vein of a lightsaber (though with the tendril shaft charged with electricity or hot plasma instead of being a laser blade). Part of the tendril modification is undertaken by integrated nanotechnology, part by energy charges to the tendril's core. Though every Twin Fleet crew member has their own stunbat and several spares, many crew members also prefer to carry their own custom melee weapon.

Both MES Twin Ships (and many other starships) come equipped with teleportation devices. These are utilised to ease and speed up transport to the the surface of planets or interiors of other vessels, if the situation is deemed safe enough.

Technology of AH.com The Series

Return to Index of AH.com-based Comedies