The Lone Chili State is the largest by area* and population* in the United States. 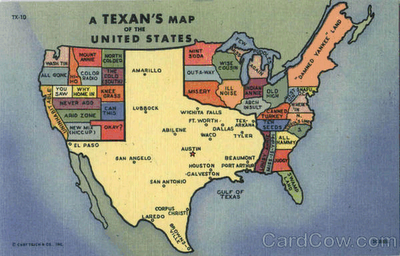 Texans have more of a common identity than is true for all other U.S. states. They are known for being loud and overly friendly. Everyone owns a ranch, except those Mexicans who merely work on them (they also work for the transportation department). Everyone listens to country music and are carnivores. Their favorite TV shows are King of the Hill and reruns of Walker, Texas Ranger (and football of course). They always remember the Alamo. Always. AALLLLWAAAYYYSSSS!

However, Texas does possess some regional differences.

East Texas is covered with woodlands and is reminiscent of the Deep South but without the kudzu. It has Houston, which is known for having the worst humidity in the world, NASA, the only actual profitable economy left in the major US cities, and no landmarks outside of stadiums. East Texas used to have lots of oil but it has been all pumped out.

North Central Texas is grassland, or would be if Dallas and its suburbs don't cover it completely. It never had any oil but has lots of gas. Dallas was recently bought in a hostile take over by Ross Perot, Jerry Jones, and Mark Cuban.

Central Texas is hilly and populated by Germans and Czechs. They like to drink beer, dance, wear black fedoras, and pretend they like polka. It has perhaps the best scenery in the state and rivers that remain freezing all year round despite 100 degree (F) heat. I think this has something to do with the sheer number of ice chests floating in the river with college students. Speaking of college this part of Texas contains the two major universities of the state. In the liberal anomaly that is Austin is the University of Texas. Corrupt and drunk on oil money they have bought their way to becoming one of the finest academic universities in the world (especially in liberal arts, law, and journalism) and are second only to UCLA in sporting success. To the east in College Station is Texas A&M, its antithesis. Geared towards agriculture, engineering, and energy (you know, practical majors) it to has quickly risen to become a great school in its own right (also thanks to governmental corruption and drunken spending of oil money)…academically. Its sports have yet to truly take off…much to the chagrin of Big Tex.

South Texas is filled with Mexicans. It might have already seceded, but no one is sure because they will only speak Spanish. Has the worst high school football in the state but makes up for it by producing 99.99999% of US Angora goat products.

West Texas is a large almost empty desert. It still has oil but apparently it is cheaper to ship oil over from Saudi Arabia than it is to drill for it here. There are lots of counties in this area that are bigger than states in the Eastern U.S. Known for Friday Night Lights, the “woulda, coulda, shoulda” city for Mexico known as El Paso, and the odd man out known as Texas Tech (drunken not on oil money but just whiskey).

Texas is home to a number of board members, including:

If you're from here, feel free to add yourself to the list.

Trotsky doesn't exactly come from Texas, per se; he lived there during his infancy before moving up to Michigan. However, he still claims it as his other home state. He still has ties and business in Austin-Round Rock, where he even has a home address.

Some banned members, such as Texas or the highly infamous Mike Collins, were from Texas as well.