A small but shift-capable ship in AH.com The Series, originally inspired by a Singaporean Navy recruitment advert which featured a corvette transforming into a mecha.

The Mecha-Corvette first featured in DO THE ANIME-TION and then barely appeared afterwards, though it was sometimes referenced. This was explained in CITATION NEEDED as being caused by it being damaged, and Flocc being endemically lazy, meaning that it took eighteen months to repair.

Its original name was RSS ISOT, but in CITATION NEEDED it was stolen by Ran Exilis, his little mouse with clogs on, and Borys, and renamed The Flying Dutchman. 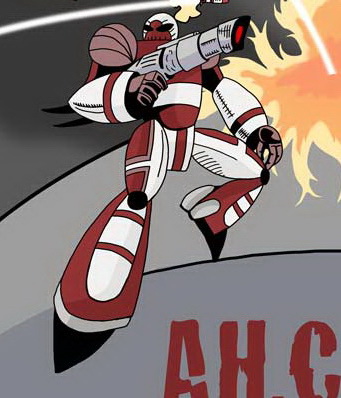 Flocc's mecha corvette, deployed in full mecha mode, with the hull of the MES AH.com seen right behind it (title card illustration courtesy of Psychomeltdown)