A Perfect Democracy: The World That Huey Made

The World That Huey Made

A perfect democracy can come close to looking like a dictatorship, a democracy in which the people are so satisfied they have no complaint.

Huey Pierce Long, Jr. (August 30, 1893 - March 15, 1960), known also by the nickname "The Kingfish," was an American statesman who served as the 34th President of the United States from 1941 to 1953. Prior to his presidency, he served as the 40th governor of Louisiana from 1928 to 1932, and then senator from 1932 to 1940. Throughout his political career, Long ran on a platform of wealth redistribution which he dubbed Share Our Wealth. As president, he served an unprecedented three terms in office, implementing most of his initial program, including the reform of the Federal Reserve Board, the Bureau of Wealth and Public Equity, the National Health Administration, National Railroad System, and the Public Broadcasting System. The Long administration also oversaw several massive construction project, including the Mississippi Levy System and Oklahoma Levy System, as well as the construction of cities and housing projects known at the time as "Longvilles." Long's presidency also saw a considerable concentration of executive power not unlike what he wielded as governor of Louisiana, which resulted in a failed impeachment attempt during his first term. As for his legacy, Long is considered the most consequential president of the 20th century, if not all of American history, with him usually ranking within the top three of most historians' lists for most consequential presidents. His time as president is what most historians consider to be the Fifth Party System, characterized by populist politics, Democratic Party dominance, and an isolationist approach to European affairs.
​
-​
Welcome to A Perfect Democracy. For years, I have always had a fascination with Huey Long. My politics have shifted over the years, but my interest in him has been the same. I have tried my hand at doing a timeline similar to the premise presented here in the past, but with little success. It has been difficult for me to stick with an idea that I like and develop it to its logical - and sometimes "illogical" - conclusions. I have admired the number of well thought-out and developed alternate worlds present on this site - @lord caedus 's American Commonwealth, @Archangel Michael 's A Jovian Night's Dream, @Kanan 's Our Fair Country, @LeinadB93 's Hail, Britannia - and I hope to add my own contribution to this site much like they have. This might be the basis for a fictional universe, who knows?

Admittedly, I am using a little bit of a butterfly net when it comes to the world events that led to World War II, but I believe most of what happened IOTL would still have happened even without Franklin Roosevelt as President during those years.

For those who are wondering, God Save Great Washington is not dead. It's on extended hiatus, and I plan to return to it. I just need a little bit longer to plan out the world. For the foreseeable future, however, I plan to work mostly on this TL. I thank you for your understanding.

Thanks to @timmy_khagann for the "Share Our Wealth" logo. The "old" Huey Long portrait and "coat of arms" are from Reddit.

Finally a thread! Good luck with your timeline, it’s really cool, even if the world outside of the US seems very cursed lol

TheKutKu said:
Finally a thread! Good luck with your timeline, it’s really cool, even if the world outside of the US seems very cursed lol
Click to expand...

To be fair, "an isolationist approach to European affairs" doesn't necessarily mean an Axis victory. Though it could also mean Stalin's empire stretching to the English Channel, which isn't a nice fate either.

TheKutKu said:
Finally a thread! Good luck with your timeline, it’s really cool, even if the world outside of the US seems very cursed lol
Click to expand...

>implying the world outside of the US is not cursed IOTL

In all seriousness, I wouldn't say "cursed." I'd say "different." At worst, it's a @Gonzo world.

Thank you very much! I'm glad I could get it up.


Snowstalker said:
To be fair, "an isolationist approach to European affairs" doesn't necessarily mean an Axis victory. Though it could also mean Stalin's empire stretching to the English Channel, which isn't a nice fate either.
Click to expand...

This is, in a sense, an "Axis Victory" TL, but it's closer to a Thousand Week Reich than a Wolfenstein one. It's dark, to be sure, but not exaggeratedly so. There are lights in this darkness.

That's what I said!
The American Progress Article

Just a poorly made screencap of The American Progress, a pro-Long newsite descendant from Huey Long's original Louisiana Progress. 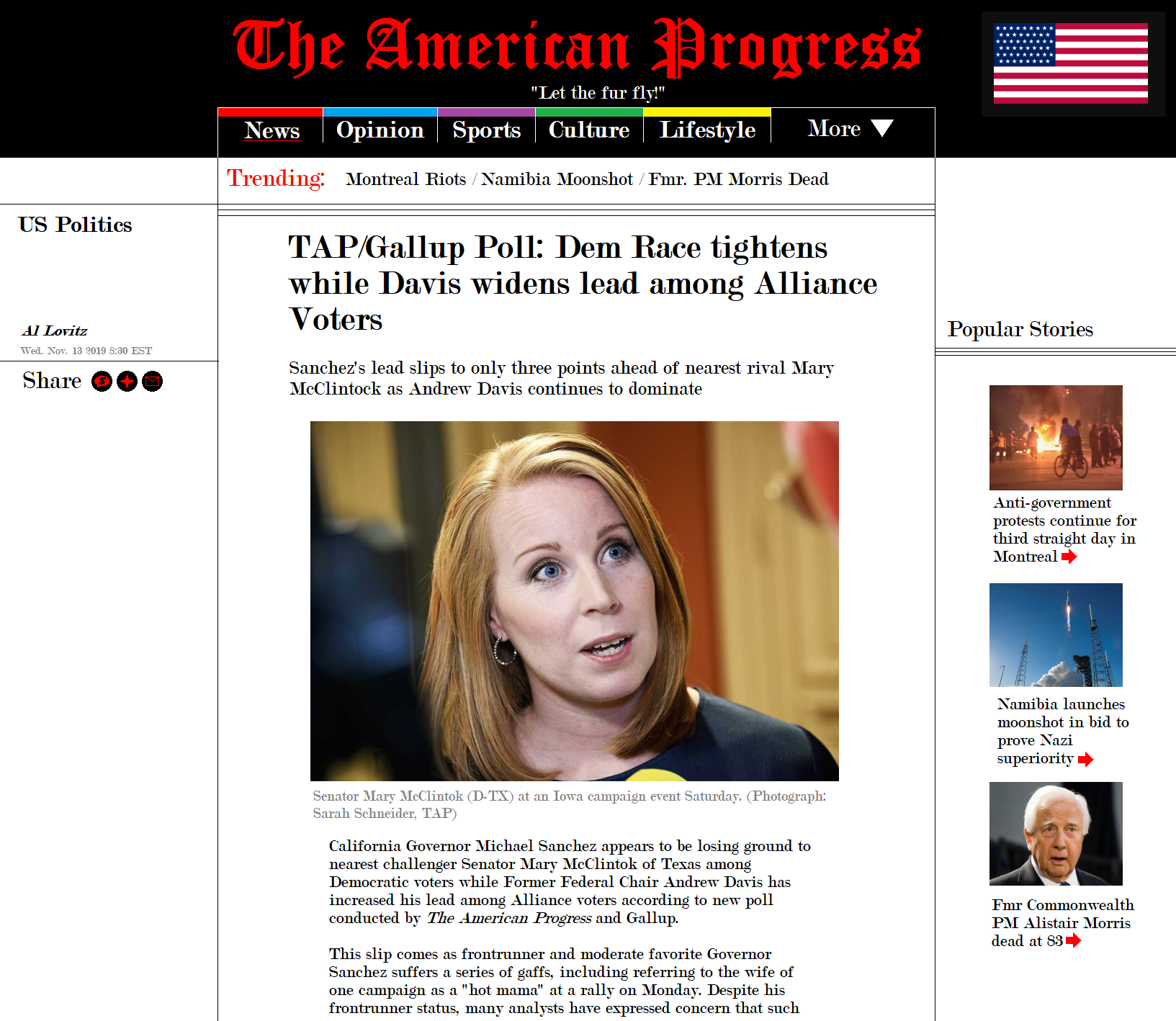 ​
The Federal Reserve Board of Governors is the governing body of the Federal Reserve System. Form in 1913 during the administration of Woodrow Wilson, Huey Long sought to reform it in order to fulfill his broader reform agenda. He borrowed from his ally Father Charles Coughlin in advocating for an overhaul to the Fed's governing structure. Known officially as the "Federal Reserve Reform Act," the "Coughlin Act" as it was known by observers required the Federal Reserve Board to have an elected member from each state. Members are elected to three year terms, and serve a maximum of three terms. Terms start at the first fiscal quarter, October 1. In order to adequately elect members prior to the beginning of the fiscal year, the board has its election on the first Tuesday of August. The result is relatively low turnout, which generally benefits the more efficient Democratic Party machines.

​
Andrew Davis is an American politician who served as the 24th Chairman of the Federal Reserve as well as a representative from the Virginia 5th congressional district. Born in Charlottesville as the son of an economics professor at the University of Virginia, Davis went on to attend the same school, getting a Bachelor of Arts in Economics as well as a Juris Doctorate. Throughout college, he was active in the Constitutional Alliance, even being elected as a delegate to the 1996 Alliance Convention in Denver. During the late 1990's, the Alliance's fortunes greatly improved against the unpopular Democratic incumbent which resulted in a massive landslide in both chambers of Congress. Davis also benefited from this wave by displacing the longtime Democratic incumbent Bob Chandler known affectionately by his constituents as the "Lumberjack" for his tendency to wear plaid shirts. Davis, who was not expected to win this race, managed to hold on to the seat for several more cycles, even winning over significant numbers of Democrats.

Davis set his sights on loftier goals. In 2005, he won the recently opened Federal Reserve seat for Virginia, holding on to it for all three of his eligible terms. The last two terms saw Alliance domination of the Board, and with it his election to the chair. His policies were fairly popular with both banks and consumers, prompting many to speculate that he was going to eventually run for president. He declined to run in 2016, probably because of the then popular incumbent Alec Reed. However, he announced his run for the presidency in March of 2015 and has dominated the polls since. His charisma and perception of being a "safe pair of hands" has made it difficult for other Alliance candidates to make a breakthrough in the race so far. Only time will tell if Davis will be able to coast on into the Executive Mansion.

Just wait til you see the Namibia write up.

I realise this may be one of the first time i’ve Seen a timeline which had a (partial) Nazi victory “in the background”, not as the main focus of the story. It’s quite interesting lol

TheKutKu said:
I realise this may be one of the first time i’ve Seen a timeline which had a (partial) Nazi victory “in the background”, not as the main focus of the story. It’s quite interesting lol
Click to expand...

The implications of a partial Axis victory will be covered. While I'll likely give the bulk of my attention to American politics, I want to be as broad-based as I possibly can.


TheKutKu said:
Anyway i think you should give links to the previous updates unless you plan on retconning them
Click to expand...

James Stewart .... that is the same James Stewart? I hope in that reality I don't have to hate him

If Jacqueline didn't marry JFK, then what happened to her?

MasterSanders said:
The implications of a partial Axis victory will be covered. While I'll likely give the bulk of my attention to American politics, I want to be as broad-based as I possibly can.
Click to expand...

Gee, I hope everything is fine with Russia.

WotanArgead said:
James Stewart .... that is the same James Stewart? I hope in that reality I don't have to hate him
Click to expand...

Yes, THE James Stewart, though I couldn’t see why anyone would hate Jimmy Stewart in any case.


If Jacqueline didn't marry JFK, then what happened to her?
Click to expand...

Probably married to a rich businessman, I would guess.


WotanArgead said:
Gee, I hope everything is fine with Russia.
Click to expand...

How did the Civil Rights movement go ITTL?

terranova210486 said:
How did the Civil Rights movement go ITTL?
Click to expand...

I don’t want to give away too much at this point. But, don’t worry, I will get to it.

Look at the “Billy Graham” wikibox to give you a bit of a clue.

So what exactly is the POD? How did Landon become president?

DimensionalZodiac said:
So what exactly is the POD? How did Landon become president?
Click to expand...

Long runs as an independent in 1936, splitting Roosevelt’s base and causing Landon to become President. Long runs as a Democrat in 1940 and wins handily.
Threadmarks
Reader mode
You must log in or register to reply here.
Top
Share:
Share
Top