A Wretched Hive of Scum and Villainy 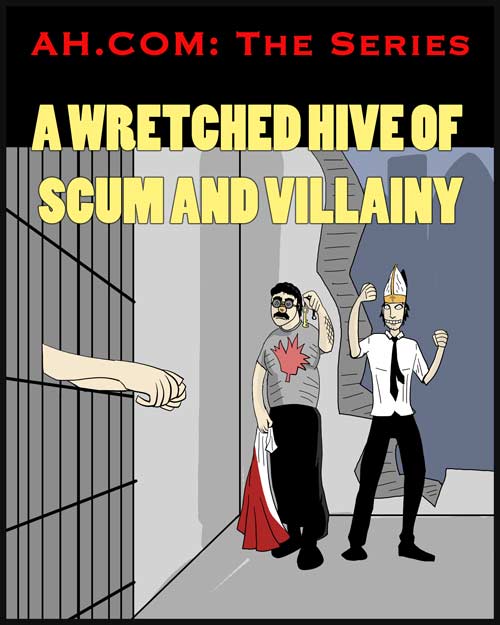 The episode begins when the AH.commers encounter the IP.net Ship, another crosstime vessel. The vessel has only two crew members, Chingo360 and an Alt. Luakel. Chingo and Luakel are overjoyed to see a possible source of new crew, and the AH.com crew see the ship as an opportunity to make money by selling it for scrap (with or without its two crew members' consent). Othniel objects, but is ignored.

Once the two ships break contact, it is revealed that there are three more people on the IP.net. Chingo and Luakel object to going through with the plan, but the tallest of the mysterious three figures shouts him down. After the two leave, the mysterious trio discuss their plans. The tall one wishes to free his master, while the second wishes to spread the true faith across the cosmos. The third figure insists that “teh nazi pirarte cthulthu-worshsiping serbin repubilcan emipre shlal ries agnian!” and the other two shout him down.

Meanwhile, G.Bone inadvertantly sets off some kind of situation with the teleporters and a man-sized mosquito is teleported aboard the ship. G.Bone makes a pitiful attempt to defend himself, but the mosquito is male and would rather have nectar than blood. Once the mosquito leaves, Doctor What and his away team of Othniel, Dave Howery, and Luakel arrive. G.Bone teleports them to the IP.net, and then informs the mosquito where Deck 10 is.

The AH.commers arrive, but Dave Howery falls through the ship's floor. The alt-Luakel offers to rescue him, while Chingo360 takes the others on a tour of the ship. Once they're well into the ship's bowels, Chingo locks them in a room with the three mysterious figures.

It turns out that the ominious trio are Molobo, Kadyet, and a new creature, the semi-human radical_neutural. Using Google Spiders, they subdue the AH.commers, sample their DNA, and assume their appearances. They plan to liberate Mike_Collins from the Hub's prison.

Despite radical_neutural's near-giveaway of their identity, Molobo orders Dave Howery to take them to the Hub. Once in the Hub, the foursome proceed to the Ouroboros.

Meanwhile, Mike torments his jailer Ian by singing right-wing parodies of Christmas carols and, using an elaborate machine, catches and cooks a bird for him to eat.

The disguised Fallen manage to trick Ian into informing him where Mike's cell is. The AH.com trio arrive in the Ouroboros moments later, but Ian has left. A mysterious man named Blaine Hess offers to help them.

The Fallen break into Mike's cell, but the AH.commers arrive soon afterward. They hold the Fallen at bay, but Blaine Hess betrays them–he's really a Mike avatar! Ian intervenes and attempts to capture all four of the Fallen, but Mike manages to hold him off long enough for Molobo and Kadyet to escape, the latter without his Opus Dei issued barbed-wire thong. They manage to steal the IP.net ship and flee the Hub.

The episode ends with Chingo and the alt-Luakel working in a fast-food restaurant in the Hub, radical neutral as Mike's new cellmate, and more fun aboard the AH.com ship–the giant mosquito has consumed all of Straha's pot plants.

This episode's events provided the spark for future story arcs and were referenced in several other episodes. Notably, Chingo, Alt-Luakel and Radical_Neutural all reappeared in the Series 2 finale, and then Chingo and Alt-Luakel appeared in several episodes in Series 3 and 4 as a double act, usually surrounded them working dead-end jobs in the Hub's Multiverse Mall.

Also, the Giant Mosquito became a recurring character rather than just a one-off joke.