Enemy Mine, Yours, or Ours 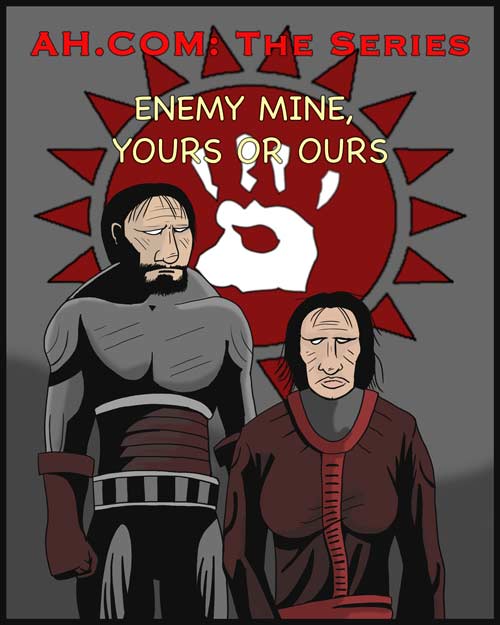 The episode begins with a figure running through a jungle like enviorment. We see a machine chasing the person, we find out the person that's being chased is in fact Doctor What. We also see the image of a white hand in a red sun, the symbol of the creatures that had invaded DW's original homeworld.

The Invaders of Doc's homeworld turn out to be Neanderthals, Doc is captured and taken to the leader of the place, Ponter. It is revealed that Ponter is the last of the Neanderthal Emperors who survived after Ward and the Human Unity destroyed the Neanderthal homeworld.

Doc is taken to be tortured for information by Ponter's daughter, Atta. Instead they end up sleeping together.

A ship then arrives that begins destroying the planet's communication satellites. Ponter thinking that this is the ship Doc arrived on order Adikor to kill Doctor What. Atta pleads to spare his life, to the horror of her father. Before anything else can happen, the palace is attacked by the ship in orbit.

Ponter is shot dead, by… Ward. The CF.net ship is in orbit.

The Neanderthals know who Ward is and they are terrified of him. Ward takes Atta and Adikor back to his ship, along with Doctor What.

Doctor What seems to have lost his memory and does not know Ward, but Ward knows him. Doc begins to learn what Ward has been doing to the remnants of the Neanderthal Multiverse Empire, namely killing them off one by one. Ward shows Doctor What this by destroying the Neanderthal city on the planet, much to Doc's horror.

In the battle, Doc manages to escape, freeing Atta and Adikor at the same time. But as he does so, his memory begins to return, especially the horror that the Neanderthals rained down on his planet. Ward shows up and the two begin fighting.

Atta and Adikor manage to escape on a shift shuttle and Doc is rescued by the AH.com ship just as Ward was about to shoot him.

Continuation of the 'Death of Doctor What' story arc.