The Empire of Nihon, colloquially often Nyon, is a country in East Asia bordering the Pacific Ocean. It is the only known constitutional diarchy in the world today with two mostly ceremonial Heads of State known as Tenno or Mikado, who are the supreme coheads of the national Shinto religion, and an elected Head of Government called the Daijin or Dajō-daijin (lit. Chancellor of the State).
This state of affairs seems to have originated from successive ceremonialisation of rulers during unification and reunification prior to official contact with the West in the Colonial Period. The first rulers following unification were Ohi Tenno (Great Solar Heavenly Sovereign) who established the Solar Goddess Amaterasu as the primary God of Shinto. Most of their governing powers were later taken up by the Taishogun (Grand Commander in Chief) during what is now call the Shogunate Period, and it appears this role was the forerunner of the Otsuku Tenno (Great Lunar Heavenly Sovereign) who sanctified the then temporary governments called the Bakufu. The chaos of the Mongol invasion lead to several Shikken (lit. Holder of Authority, thus Regent) being established before reunification solidified them into a single role. During the Shikkenate Period the two Tenno came to represent the two major Gods of the Sun and the Moon whose eternal rivalry to be supreme god generates the conditions necessary for life and (relative) stability; eclipses are thus a major occasion in Shinto to this day. Prolonged contact with Western Powers saw the eventual overthrow of the absolutist Shikkens in favour of a more democratic model under a Daijin and cabinet, though many hoped for "restoration" of the Tenno Emperors.

The flag depicts the Sun in eclipse, in red, and since the end of WW2 a blue star rose has been added representing the goal of liberty rather than militancy. 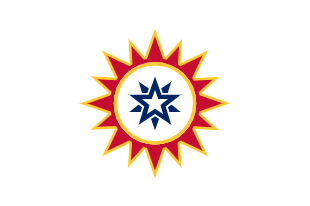 The PRJ was founded by Comrade Miyamoto Kenji and Comrade Asanuma Inejiro in 1948, after Soviet Occupation of Northern Japan. 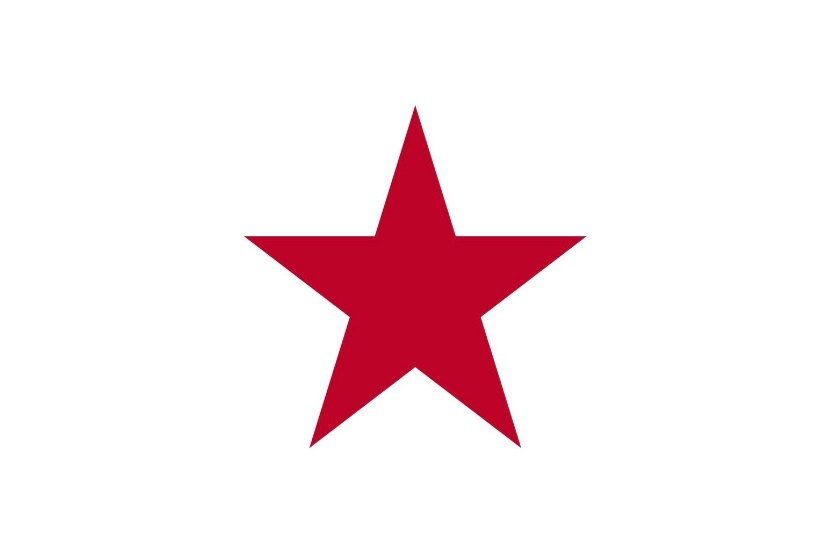 Its flag preserves the color scheme of the original Hinomaru, changing the sun to a red star.
Last edited: Mar 4, 2021

I like the simplicity of the Japanese flag and do not want to change it. The "red star on white field" flag isn't entirely my idea, but the other version is a much lighter red. I feel that any new addition (like a cogwheel or hammer) would make it too complex and less striking. So, if the MoD feels that submissions has to be entirely original, I'll add an emblem version of the flag.

Perhaps I should do a Japanese People’s Red Army Banner?
Last edited: Mar 5, 2021

Green Painting said:
I like the simplicity of the Japanese flag and do not want to change it. The "red star on white field" flag isn't entirely my idea, but the other version is quite blur, with a much lighter red. I feel that any new addition (like a cogwheel or hammer) would make it too complex and less striking. So, if the MoD feels that submissions has to be entirely original, I'll add an emblem version of the flag.
Click to expand...

I like it! The only comparable "communist Japanese" concept I could think of that would be this simple would be something like the rising sun flag, but with the central circle replaced with a cog. I like yours better in any case.

The Professor said:
@Slartibartfast how are things? Do you need one of the volunteers to help?
Click to expand...

Apologies for my disappearance there. I ended up in hospital for a few weeks but all good now.

Many thanks to those who took up the reins in my absence and well done to @Green Painting on winning the challenge!

Slartibartfast said:
Apologies for my disappearance there. I ended up in hospital for a few weeks but all good now.

Many thanks to those who took up the reins in my absence and well done to @Green Painting on winning the challenge!
Click to expand...

Glad you're doing well now. Hope it wasn't too bad.

Slartibartfast said:
Apologies for my disappearance there. I ended up in hospital for a few weeks but all good now.

Many thanks to those who took up the reins in my absence and well done to @Green Painting on winning the challenge!
Click to expand...

Thank you! Hope you are right fine! 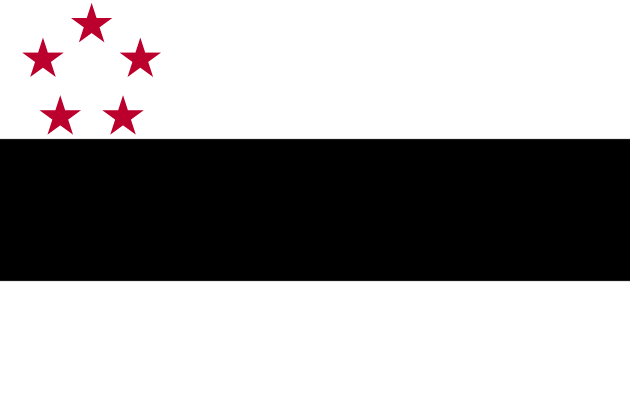 Normally I'd post an obnoxiously long description, but I'm squeaking in past the entry times anyways. Basic idea: isolationist monarchy leads a very different Boshin War analogue against a Pro-Western Tokugawa Shogunate. The Shogunate receives foreign backing, but for a time Japan is divided. After several years of conflict, Japan is finally unified into a noble republic where major clans have representation in an Upper House, while the Shogun is the reigning military general, chosen by a panel ranking officers upon the death of the prior Shogun (the Tokugawas are prominent but a strong Republican tinge has driven away notions of hereditary succession). The Lower House is open to all males after a few decades, and women some years after that. The flag is based on the white-black-white vertical flag of the Shogunate's navy. Over the years it was rendered horizontally and became a symbol of the Shogunate and later the Republic in their years of conflict with the monarchy. The Stars came later, taking the red from the monarchist Hinomaru, with five stars to represent the the 5 major Home Islands of Yamato (a name that arose due to romanticist propaganda utilized by the Republican forces). Japan has no colonies in this timeline due to their years of infighting while their neighbors were either subjugated by Western powers or grew too strong and westernized technologically to be defeated.

So so so so sorry for the delay!
The Poll is now up!

Congratulations to @ramones1986 on your victory!

Description:
Create a flag that will represent a predominantly Dravidian-speaking India (aka Meluha), either mostly within the borders of its OTL counterpart or encompassed most of the subcontinent. Any form of government and ideology will be applicable.

Carnatia, or Carou Nadou (more properly Karu Nadu), is a federated commonwealth covering the southern 2/3 of the Indian Subcontinent.
Brief History
Around the time of the Anglo-French union southern India was unified under the Sangama dynasty as a means to defend the various kingdoms against Muslim incursions. This became the Carnatian Empire as the high kings solidified their rule.
Shortly before the Colonial Period the empire fractured into competing kingdoms.
Contact with the Portuguese brought them to the attention of the Anglo-French.
A series of inconclusive wars with the leading Maiyshore Kingdom produced the Treaty of CoDominion or Protection whereupon Emperor Geoffrey III was installed as the Carnatian Marajou with the Maiyshorean Rajou as first among his governors.
Growing nationalism among the colonies and faced with increasing rebellion lead to the Anglo-French ending the Protectorate in favour of a more federated structure. Shortly thereafter the Carnatian Parliament made the Mahrajou a nonhereditary appointed post, forming its commonwealth. 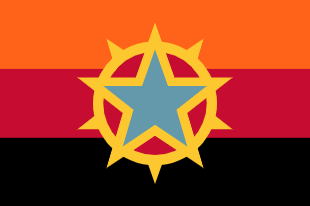 The Moghul Republic (est. 1796)
My entry for a flag for India begins halfway around the world from there.

In the mid 1700s, when France began fortifying their claim to the Ohio River Valley, Great Britain protested with counter claims. To prevent the situation from escalating into open war, Great Britain and France sat down in negotiations concerning New World claims. Eventually, Spain was invited into these talks as well. No diplomatic solution could be found, and frustrated with this, Great Britain opened an offensive against France in the New World in 1756. It was later revealed that Great Britain had been secretly staging troops and supplies. French forts were seized, and Great Britain rapidly secured French capitulation on the competing claims issue by establishing a border that gave back nominal territory to France, but which kept the Ohio River Valley for Great Britain. (note: This treaty eventually leads to the lands encompassing OTL Wisconsin, Minnesota, North Dakota, and Montana being part of Canada instead of the US.)

The French were enraged by this, and they enlisted the aid of Spain to begin a series of offensives against other British holdings in the Five Year War. The conflicts cost Great Britain vital territories abroad. In 1757, they sought to end French influence in India via the British East India Company, but in moves that mirrored Great Britain's in the New World, France had secretly built up their military presence in the area. Carefully outmaneuvering the British on the diplomatic side, they turned the fractured Moghul Empire against the British, and decisively crushed the British presence in India at the Battle of Palashi.

The leaders of the confederation, each ruling their own subah, met regularly to create federal policy. When the French Revolution happened, they discussed the development of democratic rule in both Europe and the new United States. They reviewed the Declaration of Independence, the US Constitution, the Declaration of the Rights of Man and Citizen, and the August Decrees. A semi-democratic form of government was instituted with a High Council serving as the leadership of the executive branch, a streamlined court system and brand new legal charter, and a tiered legislative assembly structure.

The reformed government was instituted in 1796 as the Moghul Republic. A new flag was required for the new nation, and some of the design elements were chosen from the old flag of the Moghul Empire. A golden braid was added to symbolize the prosperity to be found in the union of the subahs. 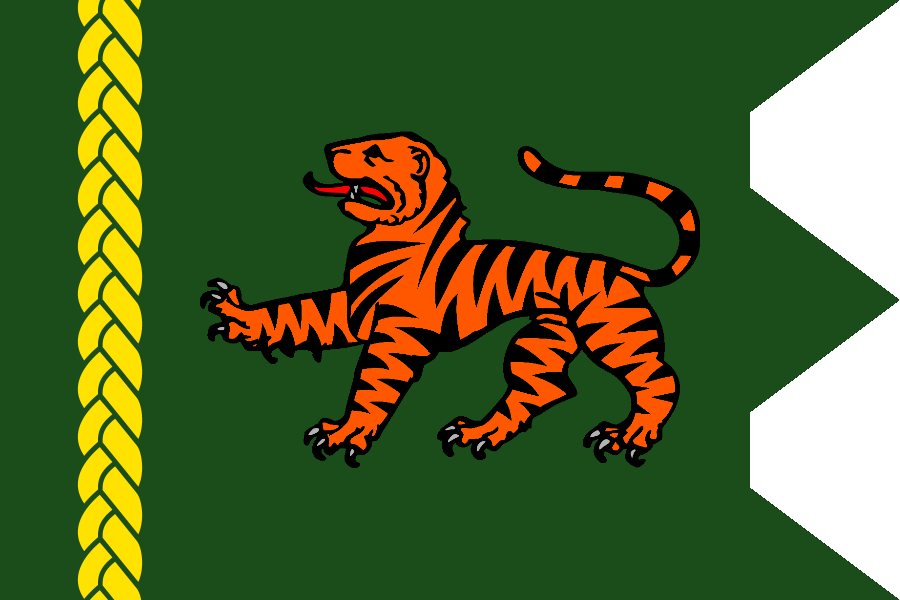 I'm all set with the next challenge. Just waiting on the official posts to close out the old one.

@Uru Hammer is the winner of the latest Flag Challenge. Congratulations!

Uru Hammer said:
I'm all set with the next challenge. Just waiting on the official posts to close out the old one.
Click to expand...

Congratulations. That was a close run thing!

The Professor said:
Congratulations. That was a close run thing!
Click to expand...

Thank you! Yes, a real nail biter at the end.

Central America has been united as a single government before (see "Federal Republic of Central America" on Wikipedia). Your job is to do it again. Or do it right the first time. Or somesuch.

It doesn't matter what kind of alteration to the timeline drives your entry. Maybe the original republic stayed together, got larger (smaller?), and created a new flag.

Maybe in 1921, the Federation of Central America didn't just flounder and disappear. Maybe it thrived and gradually became a strong, centralized democratic republic.