Marc Pasquin said:
Congratulation as the winner of Flag Challenge 217: Hip to be Square is:
Click to expand...

Congratulations @Sovereign12 - your use of the Siemens star aliasing as the reason for the square was inspired.

FriendlyGhost said:
Congratulations @Sovereign12 - your use of the Siemens star aliasing as the reason for the square was inspired.
Click to expand...

Thanks.
Hope to have the new challenge up by tomorrow.

As it is nearly Valentines Day, I thought I would go with an idea I have been thinking about for a while now, so…

You can make a flag about the new US moon colonies, the new US states/territories in the former USSR, design a flag for the lawyer amusement park in the abandoned Soviet territory, you could make a flag for where ever the people of the USSR escaped to…

The only rule is you must connect the flag to the song "Lawyers in Love" somehow.

Intriguing.
Not my favourite song. But plenty of potential there.

Just tweaking the scenario a bit but almost there!

First time I've made a submission. Here it goes: 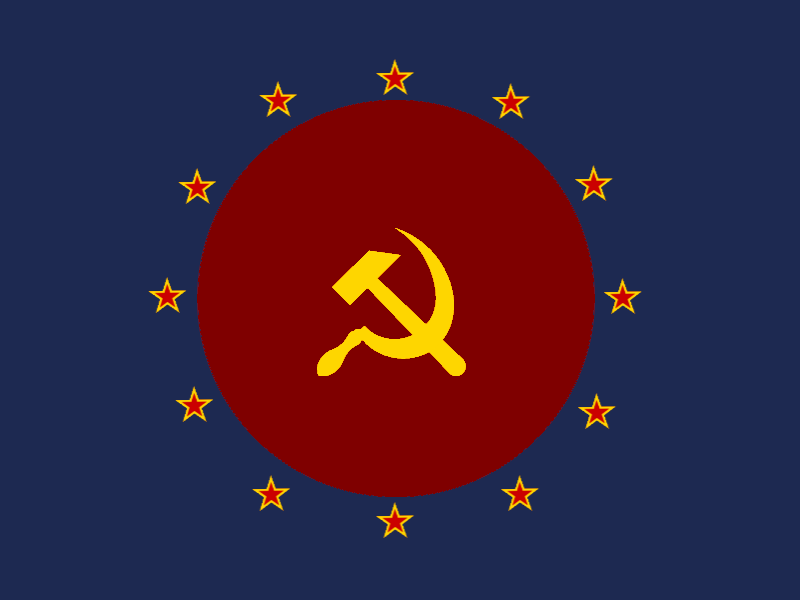 Under the direction of American 'Defender of Democracy' Supreme Leader Joseph McCarthy, Western scientists developed COVID-78, better known today as Uncle Sam, leading the USSR went into a state of panic. A deadly super-virus designed to only affect people of majority Russian heritage, Uncle Sam was revealed to the world alongside an ultimatum for the Soviet Union, giving them 5 years to give up all of their nuclear weapons, give up communism, and accept new borders for a breakup of the USSR decided by the confident NATO. This was, amongst other things, a grave threat for the Soviet leadership whether they accepted the humiliating ultimatum or risked calling the potential American bluff. Instead, the best and brightest of the Warsaw Pact found another solution.

Over the next five years, the might of a superpower embarked on the biggest project ever. Everything else was suspended indefinetly - all resources were to go to Operation Red Planet. This focus left the Union unable and unwilling to divert their efforts in even keeping the Union together - between 1978 and 1983, the Ukrainian, Moldavian and Estonian SSRs became independent nations and were welcomed by NATO - assured that they were free from the doom that awaited Russia. Meanwhile, thousands of new factories churned out resources and parts. Workers imported from China worked tirelessly with the bulk of the Russian peoples to save Communism. At last, in 1982, the launches started. After realising that they weren't missiles, NATO thought they were no threat - but they were wrong.

On a warm morning in June, Washington DC awoke to find that, a day after the ultimatum expired, the Russians were gone. But not just the Russians - aside from a few stragglers, all the land of the USSR was empty - even the numerous Russian moonbases. NATO's suspicions were confirmed when they received a transmission from orbit - the thousands of new stars spotted from Europe weren't stars at all. They were Communists, and they'd escaped while the Americans weren't bothering to watch. Both shocked and elated, the Americans made no move to pursue their enemies with McCarthy having passed away several years before. In fact, they weren't ever going to release the virus and instead had destroyed it in 1981. But, with the Soviets gone, NATO colonists flooded into Russia alongside those of China and even India.

The Soviets themselves eventually made it to their target - Mars - with surprisingly few ships lost. Following the plan they had been working on for 5 years, they established self sufficient Communes right across the Red Planet all under the common leadership of New Moscow, a great dome city on Olympus Mons. Over time, this new Soviet Union would terraform Mars until it was red only in ideology - but the distinctive 1983 flag of the USSR remained even until the 2130s. The red circle on the field of space blue represents Mars, their new home, while the 12 stars surrounding it represent the remaining SSRs in the Union. The central Hammer and Sickle represent what they always have - the strength and importance of the working class.

An interesting tale from this time was that of the many lawyers that ended up in the 'vacation lands' - a slang term among the Americans for Siberia.The lawyers were always the group that opposed the authoritarian, anti-communist regime brought in by McCarthy the most, and they suffered for it, especially after the Virus Crisis began. Initially sent to remote regions of Wyoming and Colorado, after McCarthy's death his successors decided that they were still a threat. Instead of releasing them, the lawyers were shipped to Russia and banned from ever leaving Siberia, but given free access to the area otherwise. A great deal of the population of modern Siberia is populated by the descendants of these lawyers and other exiles.
Last edited: Feb 15, 2020

The Rodinian Union (Soyuz Rodjinskiy)
On 24th April 1986 Reactor IV at Chernobyl breached the laws of physics. In most universes this would have resulted in a meltdown fine, in this universe however things were different. Maybe their Lawyers were in love?
At any rate a roughly heart shaped piece of reality around Chernobyl consisting of the Belarusian SSR south of Minsk, Russian SSR west of Moscow, and central Ukrainian SSR, were transported to an apparently virgin Earth.
In the weeks after the remaining authorities maintained control, luckily both helped and hindered by an absence of radioactive material coming along with the transport.
Out of political necessity the remaining SSRs were joined together officially the Pan-Russian SSR but unofficially simply called Rodjina (after the Standard Russian dialect for nation or motherland).
The last 4 decades have seen an expansion of territory and the beginnings of re-industrialisation, but also a drift in ideology. The politicians still vocally maintain an adherence to communism but the authoritarianism adopted from Stalin has fallen away under the early deliberate attempts to avoid imposing a social hierarchy in the wake of the Event.
The old Soviet Union flag is still used on official and cultural holidays but has gained a near religious reverence and taboo. As such the Pan Russian, rather Rodjinian, flag was first formed as a modification of Ukrainian and Russian SSR flags with blue and celeste/turquoise stripes added to the SU flag. Recently the Leninist symbol has been removed under local demand. In its place is a Socialist Star with additional rays to symbolise both their current exile but also new beginnings. 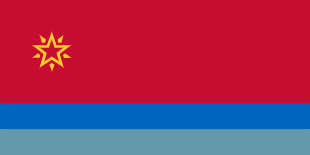 The Professor said:
Flag Challenge 219: Wannabe Claimant to the Crown of the Couldhavebeen

An ATL Empire than nearly was OTL has fallen. Generations later one of the fragments makes a bid at a "restoration".
Create the imperial flag, or banner of arms, of the claimant and advise what has changed in the interim.

Hopefully this isn't too vague.
Queries, questions, and comments welcome.

The Professor said:
Hopefully this isn't too vague.
Queries, questions, and comments welcome.
Click to expand...

After the Romans, there was Mussolini, who claimed to be a restorer of the Roman Empire.

Say if Rome was defeated by Carthage, who suffered the same fate as Rome. Years later, a certain “Mussolibal“ would claim to be the restorer of the Carthaginian Empire.
Last edited: Feb 29, 2020

Green Painting said:
After the Romans, there was Mussolini, who claimed to be a restorer of the Roman Empire.

Say if Rome was defeated by Carthage, who suffered the same fate as Rome. Years later, a certain “Mussolibal“ would claim to be the restorer of the Carthaginian Empire.
Click to expand...

I was thinking more along the lines of:
King of the Chairs marries the Queen of Door to create the Empire of the Kitchenette. Some years after the empire has fallen the Duke of Left Chair conquers the Grand Princedom of Doormat and proclaims a restored Empire.

The Professor said:
Hopefully this isn't too vague.
Queries, questions, and comments welcome.
Click to expand...

So the "Empire of Couldvebeen" needs to be originally formed through the marriage of two figures? Is that a requirement?

Aztekk said:
So the "Empire of Couldvebeen" needs to be originally formed through the marriage of two figures? Is that a requirement?
Click to expand...

Nope. Can be formed how you like (realistically of course). I just used marriage in that example. Conquest works too.

1888. The assassination of Emperor Maximilian I at the hands of a socialist radical named Eugenio Debs only hastened the inevitable. Sixteen hours after the fatal shot blew the Habsburg monarch's head off, Empress consort Carlota of Belgium rallied her forces, led by General Miguel Miramón, and stormed the capital. The townsfolk of Mexico City gathered around her golden carriage, welcoming her with flower petals and colored handkerchiefs. As the empress announced from the high balconies of Chapultepec Castle her ascension to the throne of Mexico, artillery fire ravaged the city outskirts. Crown Prince Agustín, Maximilian I's foster son and claimant to the Crown, had arrived.

The civil war between the pro-Carlota Habsburg faction and the pro-Agustín Iturbidist faction ravaged imperial Mexico. In '89, the exiled Republic launched a campaign against monarchic rule, led by star general Porfirio Díaz. The prolonged campaign would engulf the north of Mexico, and inch its way south through silver-rich Zacatecas, Aguascalientes, northeastern Jalisco, and Guanajuato. The Iturbidist faction, which commanded most popular support, retreated to the countryside of south-central Mexico, where Agustín was the strongest. Conservative and Catholic Carlota and the Habsburgs, meanwhile, withdrew to the wealthy Bajío region of the center-west, which was historically more receptive towards the Habsburgs' liberal policies. Upon reaching Mexico City in the autumn of 1891, after bitter casualties and long months of war, Porfirio Díaz proclaimed the Mexican Republic, although his influence was constricted to the areas under Republican control. Fractured and divided, the Second Mexican Empire was no more.

1924. An ailing Carlota has summoned her Imperial Council. Childless, the future of the Imperial State of Mexico hangs in the balance. Her ministers and counselors assemble by her bedside. The old Empress has made her decision: "the young princess from Germany, that Hohenzollern girl... She shall succeed me." The sole survivor from the Berlin Massacre of 1914, she escaped the bitter fate of her brothers and fled to Belgium. Upon the outbreak of war mere months later, Carlota's connections secured her safe passage to her dominions. Her name is Princess Victoria Louise of Prussia, former Duchess consort of Brunswick.

Upon Carlota's passing in 1927, Victoria Louise became Empress Victoria I of Mexico. She was unbending in her mission to reunite Mexico under the glorious banner of the Habsburgs, and crush the God-forsaken Iturbidist filth that tainted the Madre Patria. On the cool night of 20 July 1928, 40,000 soldiers rushed the countryside of western Guerrero. From her palace in Guadalajara, Victoria I proclaimed the Third Mexican Empire. 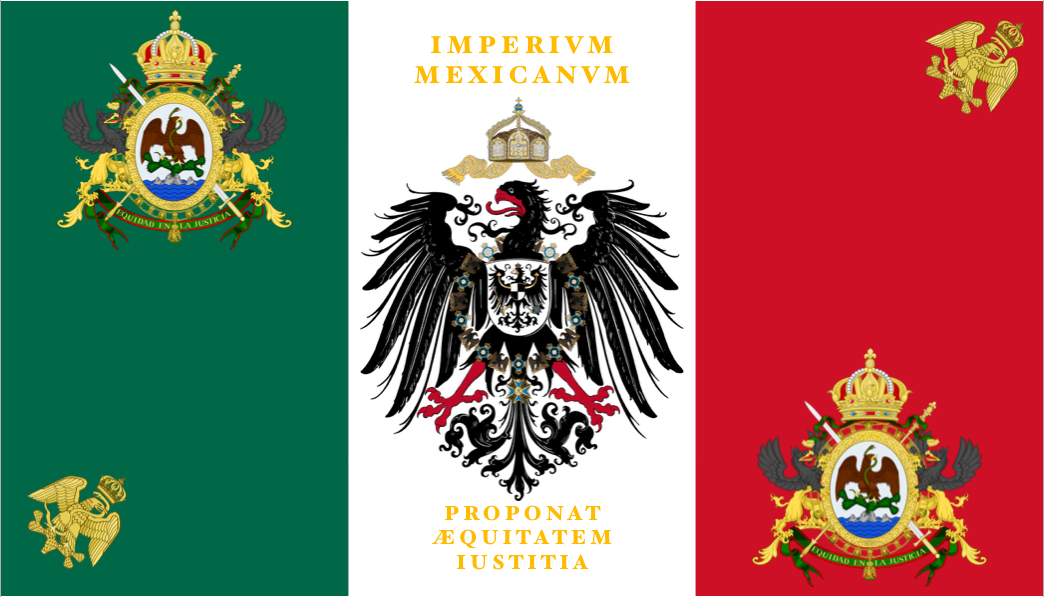 Personal standard of Victoria I as Empress of the Third Mexican Empire.

Aztekk said:
Personal standard of Victoria I as Empress of the Third Mexican Empire.
Click to expand...

My first entry into the contest. Tell me if I messed something up

Aztekk said:
My first entry into the contest. Tell me if I messed something up
Click to expand...

Hmm, stretches the Couldhavebeen element a tad since the Mexican Empire being "restored" actually existed OTL...

The Professor said:
Hmm, stretches the Couldhavebeen element a tad since the Mexican Empire being "restored" actually existed OTL...
Click to expand...

Not necessarily. Since the Republic still existed, everyone but France was like, "yo, what's that Austrian dude doing there." I mean, it was declared, but in the grand scheme of things it wasn't really a thing.

Any more entries before I extend the deadline?

The challenge is hereby officially extended by a week. 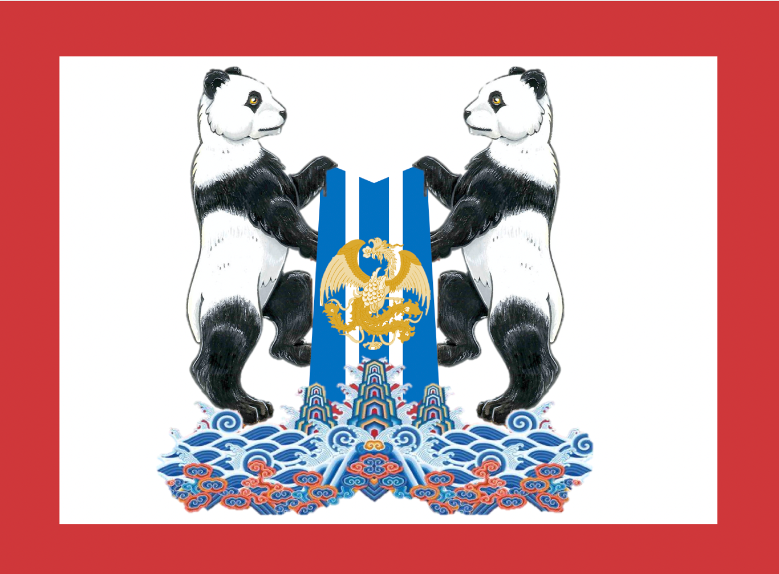 Kingdom of Sichuan, claiming to be a successor to Shu-Han of the Three Kingdom period.

There may be a re-submission before Friday.

Sorry, I don’t have time today. let me submit the flag as it is.
Last edited: Mar 13, 2020
You must log in or register to reply here.
Top
Top