Between the 14th and 15th centuries, upper and lower Bavaria were repeatedly subdivided amongst different inheritors. After the division of 1392, the Four Duchies were created: Bavaria-Straubing, Bavaria-Landshut, Bavaria-Ingolstadt and Bavaria-Munich. These dukes often waged war against each other, but at some point during this period rather than fighting, an early tournament of Karnöffel became the deciding factor on the outcomes of disagreements within Bavaria. As Karnöffel is played in two teams of two, the two of the Dukes would play the pair of other Dukes.

After the conquest of Bavaria and the other German states by the Polish-Prussian Commonwealth the playing of Karnöffel for political decisions stopped in the late 18th century. It would not be until the commonwealth broke apart in the late 19th century that Bavaria would be a free nation again. The nostalgia for Bavarian history would reignite a passion for the game and its role in politics. The reinstituted monarchy would be based around four subdivisions with similar borders as during the Four Duchies era. Partners would be determined by democratic election by the citizenry.

Flag: The flag of the Kingdom of Bavaria would use the traditional lozenge white and blue pattern, with 21 lozenges on the flag. The top left lozenge is white, as is traditional, but is more centralized to the corner than in previous incarnations of the flag. Depending upon which power block held power for the next four year, their associated card suite would be placed at the center. The partner’s suit would be placed at the top in the upside-down order. The center of the symbol would have the silhouettes of the three subservient houses’ symbols in a line.
For example: here we have the current the Duchy of Bavaria-Ingolstadt (bell) situated in the center of the flag, with Duchy Bavaria-Munich at the top flipped upside down signifying there secondary status. Across the mid-point of the bell are the silhouettes of the other duchies. 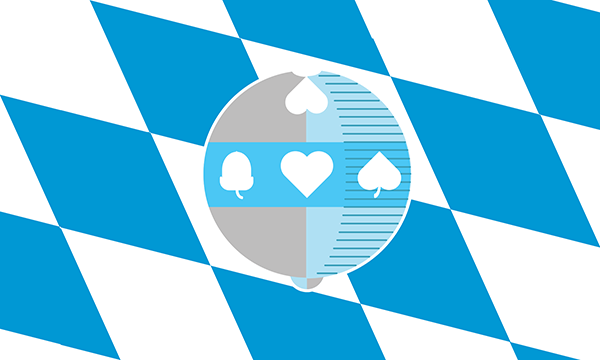 Province of Quebec
During New France's colonial time, the colony faced a constant shortage of currency. Chests of coins would be brought in from france by merchant ships licenced by the government only to leave a few months later on the exact same ships as locals bought desperatly needed goods.Eventually the local authorities introduced an emergency currency, the Monnaie de Cartes or Playing Card Money.

Card Money proved so popular that it came to be associated with economical success amongst the french-canadian population. For this reason, when it came time to chose a provincial flag for the province of Quebec, the symbols used to represent the 4 suits were incorporated into it to signify its hope of future prosperity. 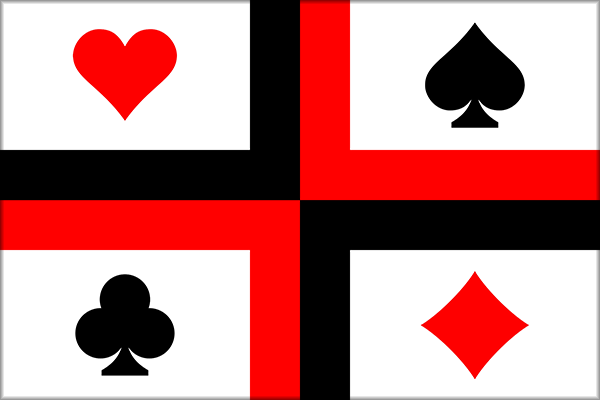 KuboCaskett said:
Is Hanafuda allowed too?
Click to expand...

Might be too not abstract? Perhaps pm me what you have in mind, especially if you have a draft.
Last edited: Jan 17, 2020

Sorry I wasn't able to enter this time. RL took priority, as my father-in-law was taken into hospital (he's back out now). The vague idea I had was nowhere near as good as the two entries anyway...
I see the poll is now up (here) so I'll go and vote...

FriendlyGhost said:
Sorry I wasn't able to enter this time. RL took priority, as my father-in-law was taken into hospital (he's back out now). The vague idea I had was nowhere near as good as the two entries anyway...
I see the poll is now up (here) so I'll go and vote...
Click to expand...

don't think about it as missing a challenge, think of it as a longer warm up up for the next one.

FriendlyGhost said:
Sorry I wasn't able to enter this time. RL took priority, as my father-in-law was taken into hospital (he's back out now). The vague idea I had was nowhere near as good as the two entries anyway...
I see the poll is now up (here) so I'll go and vote...
Click to expand...

Marc Pasquin said:
don't think about it as missing a challenge, think of it as a longer warm up up for the next one.
Click to expand...

Hmm, we do need more volunteers...

Re-imagine a real life flag as containing a square and explain why it does,

The square can be an independent element, a field division, an outline, etc.....

So, this is an OTL flag but we're interpreting it differently?
Or are we adding a square (etc) to an OTL flag?

The Professor said:
So, this is an OTL flag but we're interpreting it differently?
Or are we adding a square (etc) to an OTL flag?
Click to expand...

Okay here is my attempt.

Universe 29-TL-SUN-1097 has an interesting POD in that the divergence starts with a fire and the small supply of red paint, resulting in a bit of an optical illusion.

The flag of Japan, the rising sun, had symbolic meaning since the early 600s starting in the Asuka period. As the Japanese islands are east of the Asian mainland, the sun "rises" from the east. In 607 CE, an official correspondence that began with "from the Emperor of the rising sun" was sent to Chinese Emperor Yang of Sui. Japan is often referred to as "the land of the rising sun".

A well-known variant of the flag of Japan sun disc design is the sun disc with 16 red rays in a Siemens star formation. The Rising Sun Flag has been used as a traditional national symbol of Japan since the early 1600 Edo period. The Army war flag was adopted in 1870 and the naval flag a few years later. While the Army’s flag had the sun in the center with the rays emanating out, the Navy’s flag would place the sun closer to the lanyard or flag pole.

Just prior to the Satsuma Rebellion a fire had erupt in one of the supply depots that the army had set up. In order to not lose honor men were ordered to quickly find any available white fabric and red paint in order to recreate the Army war flags that had been lost in the fire. While several flags were painted to standard, about a quarter of the way through the available cloth, the men realized there was not enough red paint. It was decided to just place the sixteen red rays of the sun on the flag in order to create as many flags as needed. It was during the Battle of Tabaruzaka that the flags were first used in large numbers. The optical blur of the Seimen’s rays on the flag caused many to see a square in the center of the flag when at a distance from the flag. After the Imperial army was victorious in the battle, the “square sun” began to be painted onto several of the flags, lacking the circle, as a good sign of victory and good luck.

Flag: The Japanese Army War flag with the square sun would be official adopted in 1910. The square was associated with the Earth and the physical world in many cultures and also represented a sense of stability. As a square is made up of straight lines it is seen as rigid and unbreakable, leading to stability and a strong foundation. The connection of the square with the four cardinal points of the compass enhanced the connection of the “square sun” to the “circular sun” of the Imperial flag. 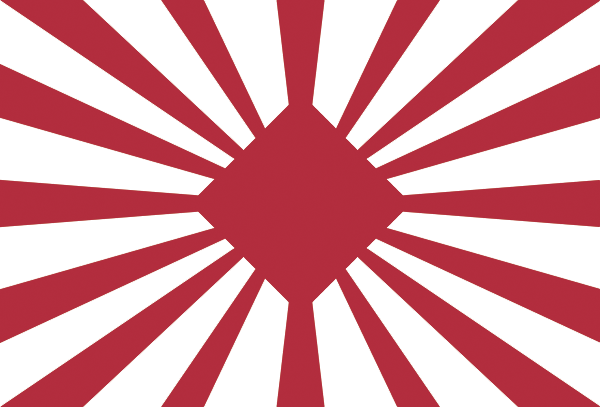 day and a half to send in your entries. I'm sure that Sovereign12 would rather beat his rivals at the poll than win by default.

Marc Pasquin said:
day and a half to send in your entries. I'm sure that Sovereign12 would rather beat his rivals at the poll than win by default.
Click to expand...

Flag of the Federated Arab Republic of Libya, from 2014
During the uprisings against Ghaddafi in 2011, various flags were used by the opposition groups. In many areas the flag of the Kingdom of Libya[1], originally used from 1951 to 1969, was used. This was the flag adopted in 2011 by the National Transitional Council. Other groups preferred the Arab Liberation Flag[2], which appeared on its own and with various different symbols on the central stripe, including the Shahada, the Rub el Hizb, an eagle, different numbers of stars, and a crescent and star.
Despite many nations and international organisations recognising the National Transitional Council as the legitimate government of Libya, with this handing over power to the General National Congress in 2012, the civil war continued. In early 2013, a cease-fire was brokered by the African Union between the three largest armed groups. This led to peace talks and eventually, in early 2014, to the election of a new Unified Parliament of Deputies. The same talks dealt with the matter of the flag, finally deciding on one which incorporated all four of the Pan-Arab colours: red, black, white and green.
The flag breaks with the tradition of the coloured stripes being horizontal. Instead both ends of the black central stripe are extended to the top and bottom of the flag, reducing the area of the red and green stripes. The centre square thus created is white, with a black crescent and star. The prominence of black symbolises the importance of Muhammed, with whom the colour is associated. This geometric layout gives the appearance of a corridor with black walls, a red ceiling and a green floor, all leading towards the white square in the centre, which symbolises God, the creator of the universe (symbolised by the crescent and star).
The Religious Advisory Council of the Parliament (one of the three mandated advisory councils) uses a variation on the flag with the Shahada in place of the crescent and star, symbolising adherence to Islam. The Judicial Advisory Council uses one without any symbol in the centre square, symbolising non-discrimination. The Military Advisory Council uses the flag with one single red star in the centre square, symbolising the blood of the fighters.
[1] Horizontal stripes of red, black and green with a white crescent and star in the centre of the middle, black, stripe.
[2] Horizontal stripes of red, white and black. 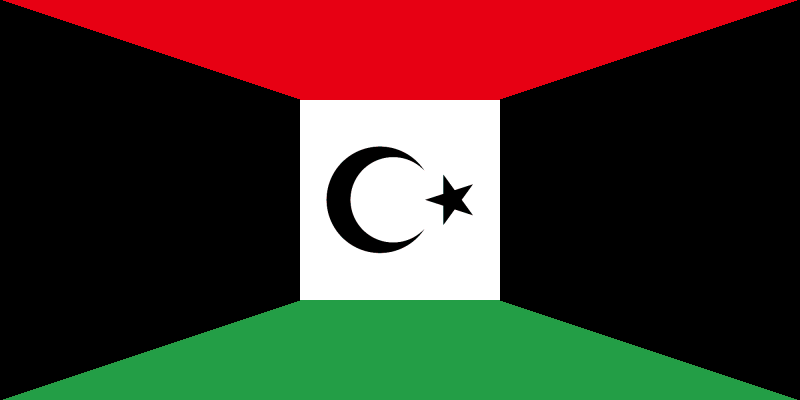 poll is up:
Poll for flag challenge 217

And now I think of something. Irony, thou art my life.

The Professor said:
And now I think of something. Irony, thou art my life.
Click to expand...

I know that feeling...

The Professor said:
And now I think of something. Irony, thou art my life.
Click to expand...

FriendlyGhost said:
I know that feeling...
Click to expand...

you guys can always post your ideas in the flag thread. Would be curious to see them.

Marc Pasquin said:
you guys can always post your ideas in the flag thread. Would be curious to see them.
Click to expand...

The Professor said:
An idea I had too late for the Challenge:
View attachment 521166
Essentially the American rebels use a slightly different standard which on conferederation then union has the "Liberty Star" remodelled slightly. It's said to be 3 overlapping stars that represent the division of powers and serves as a "beacon of liberty".
Click to expand...

That's up to the winner of the poll (here), which doesn't close until 10th Feb.
You must log in or register to reply here.
Top
Top