Moonlight in a Jar: An Al-Andalus Timeline

IOTL, something similar really did happen with the Yucatan Peninsula. A Spanish conquistador asked about the name of a settlement, a Mayan responded "I don't understand," the Spanish thought he said Yucatan, and that's how the peninsula got its name.

Huzzah! It is back!


Planet of Hats said:
The boundary of the Andes and the sheer distance from resupply made an Asmarid campaign over the mountains untenable, even with sea access in play. This distance, and the unwillingness of the Asmarids to throw endless dinars into a grueling mountain campaign on another continent, ultimately contributed to Iskantinsuyu's long-term survival and the unique status of the Andean region as a unique cultural zone.
Click to expand...

MAY THE RAINBOW BANNER FLY UNDER INTI'S GRACE. MAY HIS PEOPLE FOREVER REIGN.

Though this does make me wonder if the future Inka might instead create alternate flags and symbolisms that are intentionally opposite to Andalusian designs, just to further differentiate themselves. It'll be something to see Andean flags like the ones below flying high in times of battle. 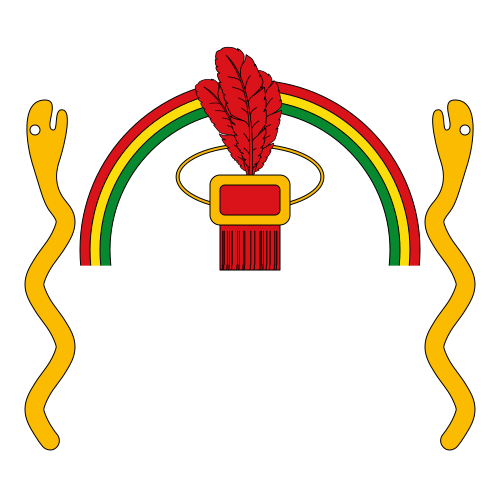 How advanced is technology in Andalus and Western Europe compared with OTL?

And how hellenized are the Bataids? Do they see themselves as the Roman Empire ?

Could smth along the line of cape coloreds form ittl? Will their be interbreeding between kohisan and berbers?

Blaze said:
And how hellenized are the Bataids? Do they see themselves as the Roman Empire ?
Click to expand...


HerodotosofBerlin said:
Could smth along the line of cape coloreds form ittl? Will their be interbreeding between kohisan and berbers?
Click to expand...

Knowing How Muslim Interbreeding, with Muslim taking some Kohisan wives/concubines so yeah might happen very easily unlike otl boers

I'm so happy that you are back.
I have a question ,is Iberia going to be united under one state or are we seeing al-andalus maximum expansion on iberia?
also I'm very interesting to see what the English are doing after they acquired informations about the new world

Was there ever a map posted with Arabized place names in the New World?

Shutenmaru said:
Was there ever a map posted with Arabized place names in the New World?
Click to expand...

Will we have an updated map soon? One that shows the new lands (Tirunah, etc)?

Contrary said:
Will we have an updated map soon? One that shows the new lands (Tirunah, etc)?
Click to expand...

I am actually working on a map as we speak.
ACT VIII Part XXI: Map of the Pearl Islands, Anawak and Tirunah in the 1460s

Donor
Here's a look at Anawak and the Pearl Islands in the 1460s. 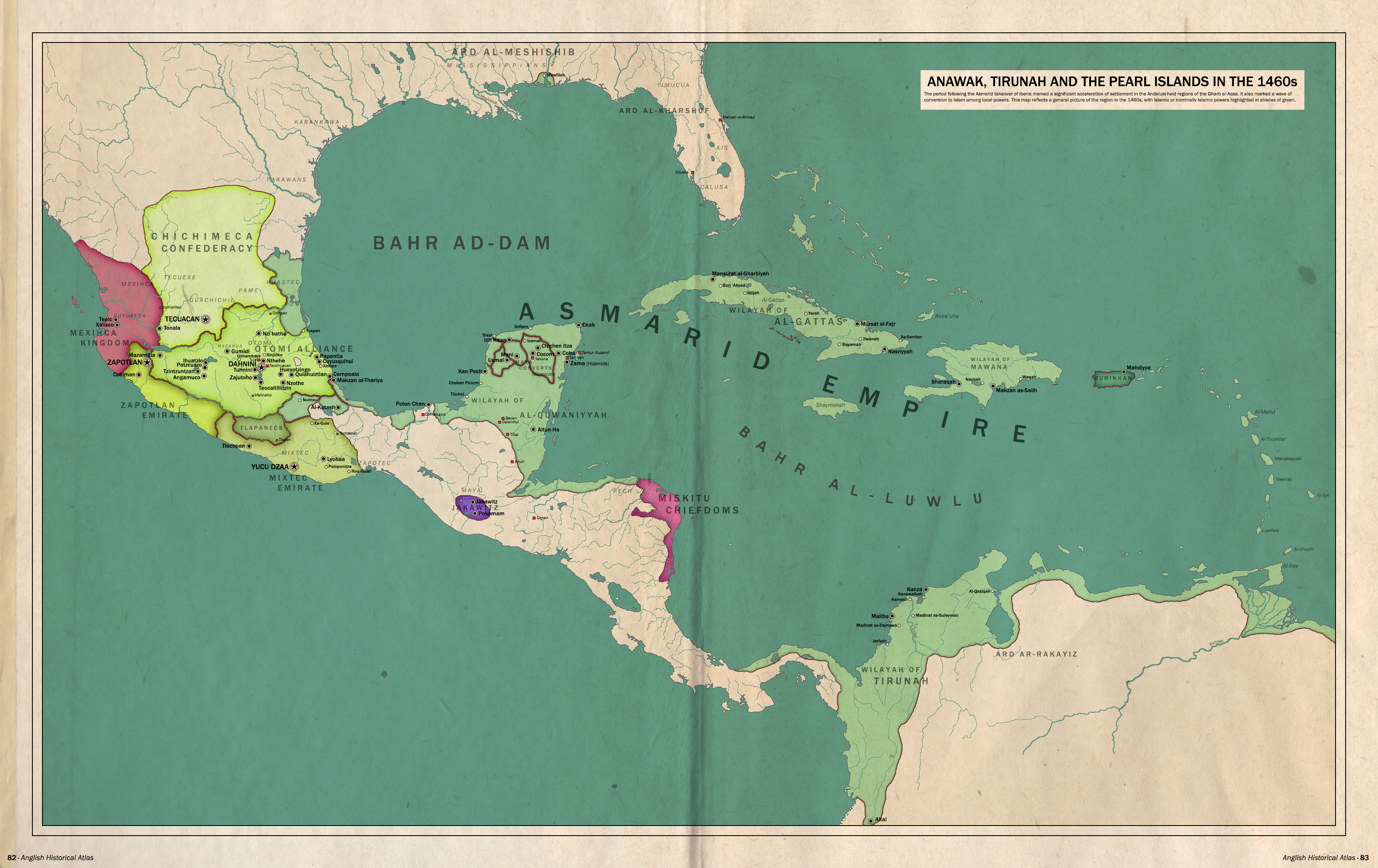 The influence of the Otomi and various Sufis and fortune-seekers has borne fruit: The Mixtecs and the leaders of Zapotlan have nominally converted to Islam, several cities have fallen to warlords (including the Huastec region), and the Chichimeca are beginning to convert. Holdouts include the Mexihca, the southern Maya and most of the chieftains of the Mosquito Coast. Also notable is that the first permanent settlement north of Anawak and the islands has been established around OTL Mobile, Alabama.

Im confused on Puerto rico who rules it?

If I remember correctly a bunch of Berber exiles got shipwrecked on the island and formed alliance or pact of coexistence with the local natives, don't think we've heard much from them since, either they rule the island or they assimilated into the native culture since there was less than a hundred of them, perhaps a sort of Taino-Berber kingdom?

Planet of Hats said:
Here's a look at Anawak and the Pearl Islands in the 1460s.
Click to expand...

Always love a map, question though. Are Los Jardinas de la Reina supposed to be colored different/under a different policial entity than the rest of the Caribbean or is that just how the map rendered them?

that map is fully glorious, i am in literal awe. At the same time though its a shame about the mixtecs, i was gunning for a non muslim plurality for a while at least. Oh well- can I ask whether the otl maghrebi near obsession with the shurafa is developing? otl in the fifteenth century, it was still relatively weak compared to how strong it would become by the 18th century when rule by non-shurafa is inherently illegitimate, but is it still the case that a sultan who isn't perceived as materially supporting the descendants of the prophet is likely to suffer challenges to his rule?

That's a truly beautiful map indeed! May I ask you what's your secret ?

SenatorErnesto said:
Always love a map, question though. Are Los Jardinas de la Reina supposed to be colored different/under a different policial entity than the rest of the Caribbean or is that just how the map rendered them?
Click to expand...

Wait, is the Mexihca kingdom to the west the Mexica/Aztecs of OTL? If so, that is one great detour they have made! Whatever the case, it seems like their hegemony is now being short-circuited by the number of nominally-Islamized Mesoamerican states surrounding them. I shudder to think what'll happen once the Guachilchil gets used to Old World horses...

And Tzintzuntzan nooooo!! I was hoping for the Purepechas to be a separate state unto themselves. Guess the Otomi alliance is really stronger than it looks.
Threadmarks
You must log in or register to reply here.
Top
Top