Patagonia, one of the most iconic and rugged regions in all of South America, was for a while composed of independent Mapuche tribes, left unconquered until the aptly-named Conquest of the Desert from 1870-1880. However, also during this period, an insane Frenchman showed up and proclaimed a kingdom that would help protect the Mapuches. He was promptly arrested by the Chilean Authorities. He returned to Patagonia and was promptly arrested, this time by France. He died sad, poor and alone. It's actually a pretty sad story. I thought the flag he made for his country (the Kingdom of Auracaria & Patagonia), was also pretty sad, too, so I redesigned it for some 1-in-100-quadrillion chance his kingdom somehow survived.

The flag takes its colors from his flag of Auracaria & Patagonia, but re-orders them into a representation of the natural landscape of Patagonia. White is for the glaciers and for snow on Patagonian mountaintops. Green is for the native vegetation, and the mountain is emblematic of Patagonia's rugged sierra nature. Blue is for the incredibly clear Patagonian sky (Patagonia gets very little precipitation, and thus has few clouds). Finally, the weird star thing on top of the peak of the mountain is the ethnic independence symbol of the Mapuche, who in this timeline represent a majority of the population in Patagonia rather than being nearly killed off by the Argentinians. 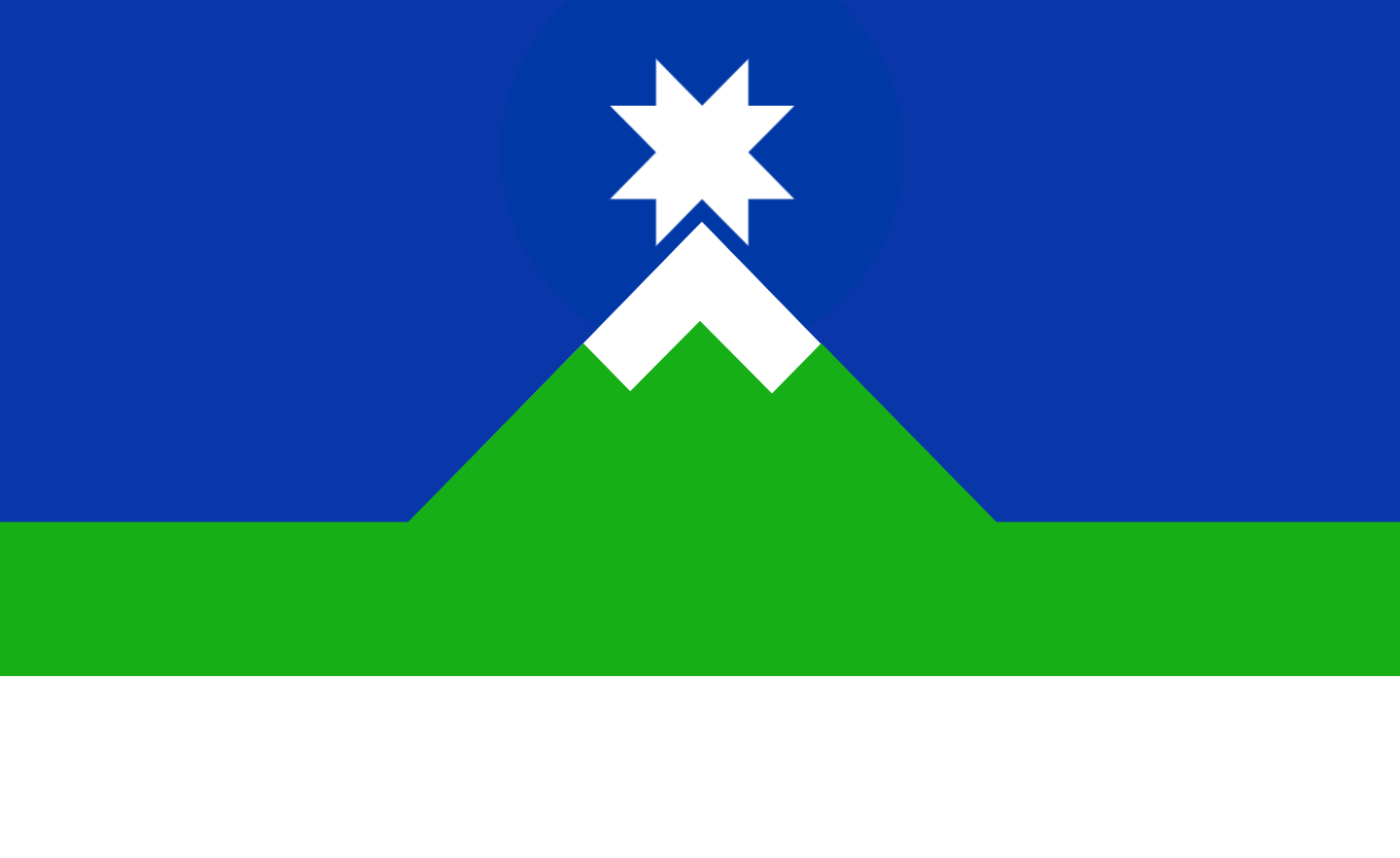 FireCrispyHistory said:
View attachment 739212
Flag of Greater Indonesia
MEANING
Dark Blue -Shows the nation in Dark Blue, standing for the freedom of their citizens
Light Blue - Represents the ocean that protects the nation from exterior threats.
Red - Those who gave their lives for the country.
Thoughts and Opinions?

Don't know what Greater Indonesia is? Head to the thread "The Great War of 2050 and Beyond" and read up on it.
Click to expand...

Not being an European country, it is possible to not follow heraldic rules.
However usually, non metallic colors cannot stand one over another.
So, at least the siluhette of the country, should be highlighted in Argent (aka white) or Or (aka yellow).

Oh this is one of the nicer patagonia flags I've ever seen! great job!

Tyche said:
Oh this is one of the nicer patagonia flags I've ever seen! great job!
Click to expand...

What if Mikhail Gorbachev's plan for a less centralized Soviet Union, the "Union of Soviet Sovereign Republics," succeeded?
Many countries already wanted to break away from the union, but all of the central Asian countries approved of this new system, even after the August Coup of 1991, perhaps illustrating why these countries are so close to Russia (and take so many of their current flag elements from the time when they were SSRs). I made a flag for the Uzbek Soviet Sovereign Republic (UZSSR).

Essentially, it takes the red field from the old SSR flag, scraps the hammer and sickle, but keeps the old stripe pattern, as well as adding a green stripe for Islam (as religious toleration became much higher during the Gorbachev Era), and adding the national symbols, the Crescent and Twelve Stars.

Eventually, the red field in Central Asia becomes recontextualized as a simple symbol of allegiance to a much more moderated version of Russian Socialism, though the struggle for independence continues. 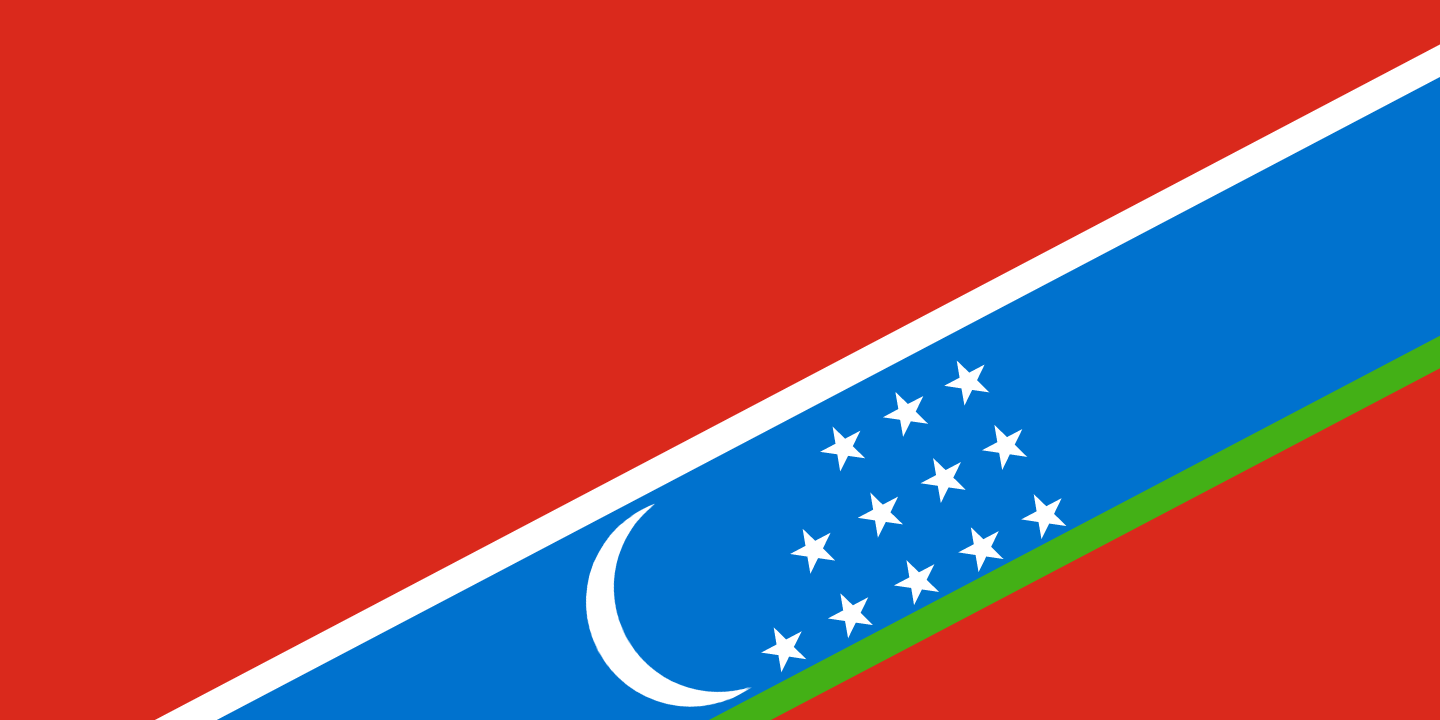 Flag of the Dominion of South Africa and South Rhodesia. 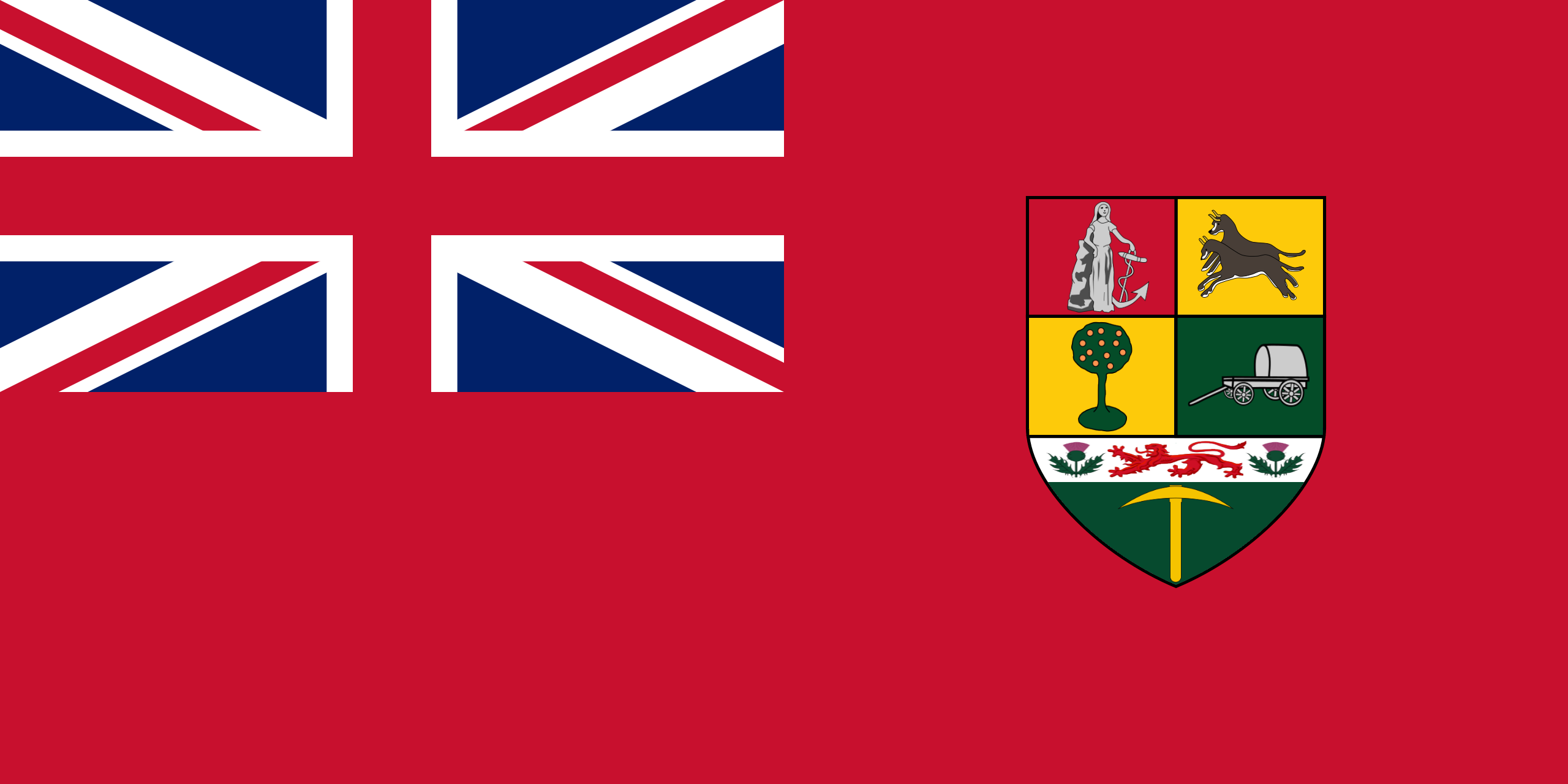 Using @DUWANG's Union Jack, I present to you: Australia! 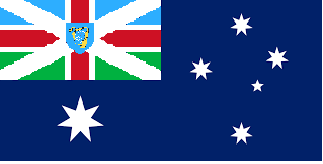 Sorry about the terrible image quality. I had issues with the Union Jack.

KaiserGenghis said:
Using @DUWANG's Union Jack, I present to you: Australia!
View attachment 739759
Sorry about the terrible image quality. I had issues with the Union Jack.
Click to expand...

I got ya king. 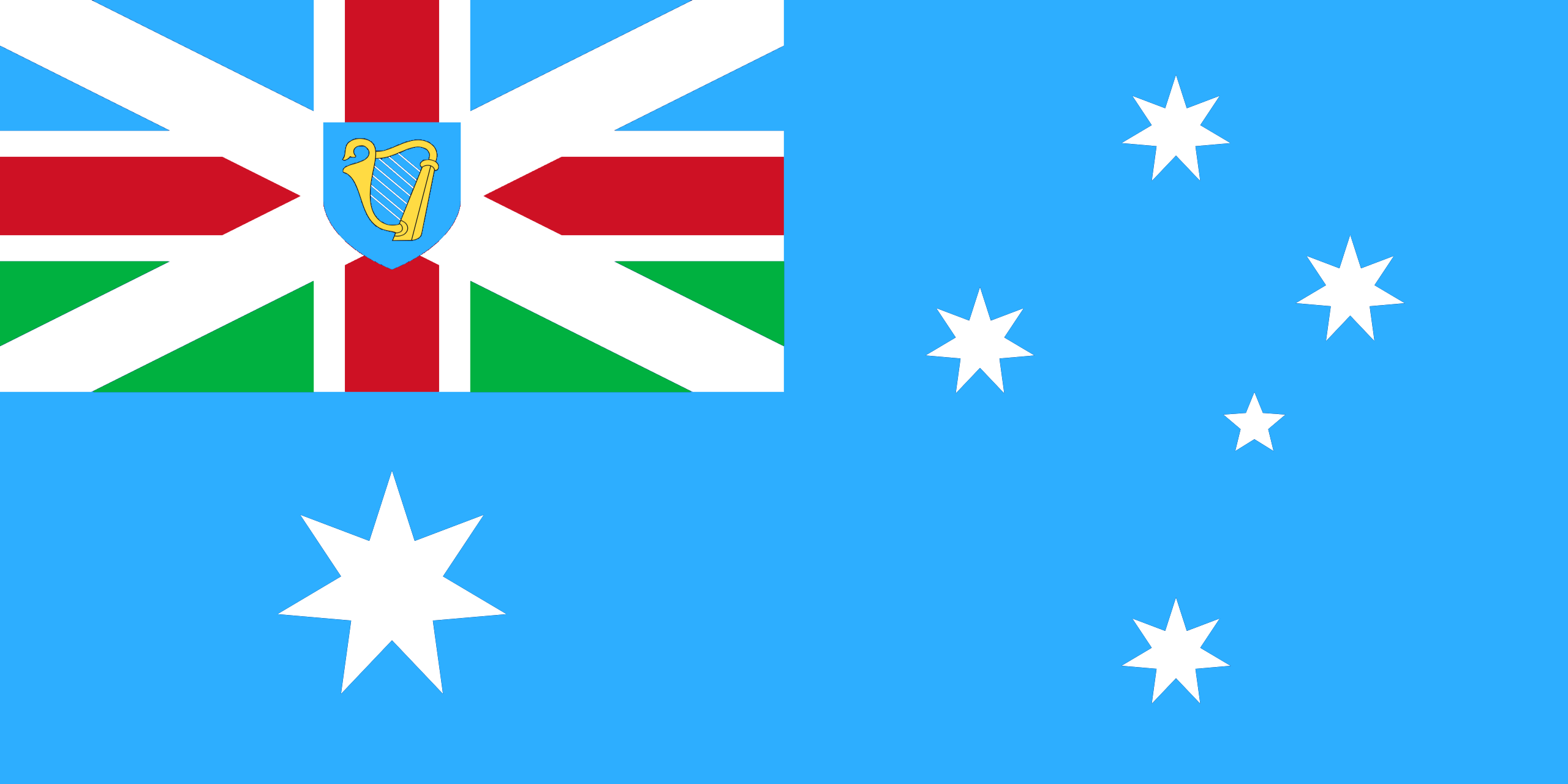 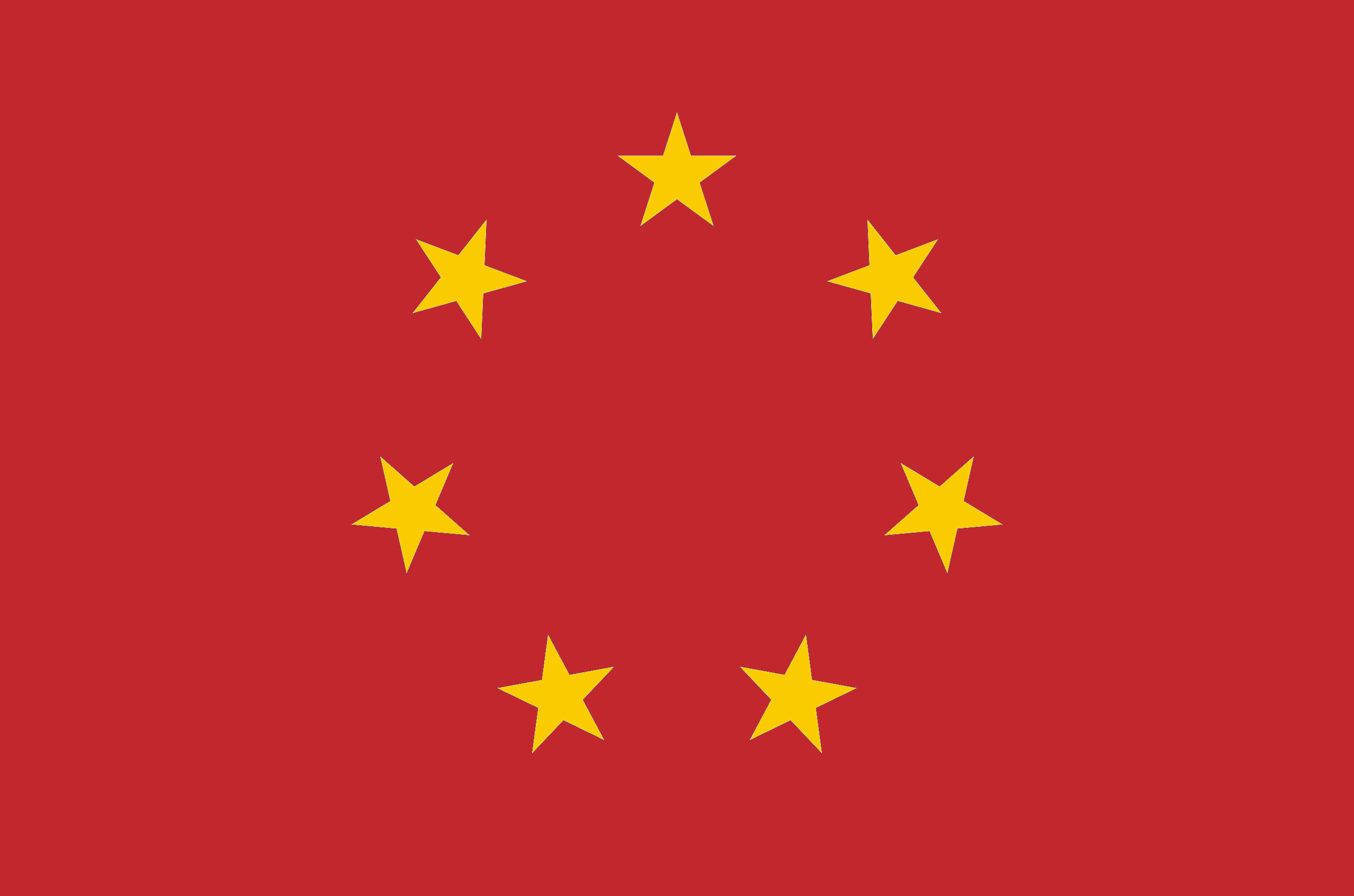 Naval jack of the Confederation of American Socialist States in Differently, a timeline on the Althistory Wiki that I'm somewhat of a contributor to, as described on the talk page for the CSA article.

While I initially wanted to use the white-and-green stripe from the Tajik Soviet Socialist Republic, I could not find a way to incorporate the lion into it, so I ditched that idea. Though I did make another flag that I will post later as a result.

The winged lion regardant is a traditional symbol in Persian mythology, and it stands for the authority, power, and strength of the state. It is also a national symbol of Tajikistan. The tricolor band is the white-green-yellow colors of the Tajik Islamic movement. Together, these two symbols signify the cooperation between religious and state bodies to better the lives of the citizens of the Tajik Soviet Sovereign Republic. The four stars symbolize the four main regions of the TSSR, and are protected by the winged lion. This is a symbol that the government will do all to defend the Tajik people. 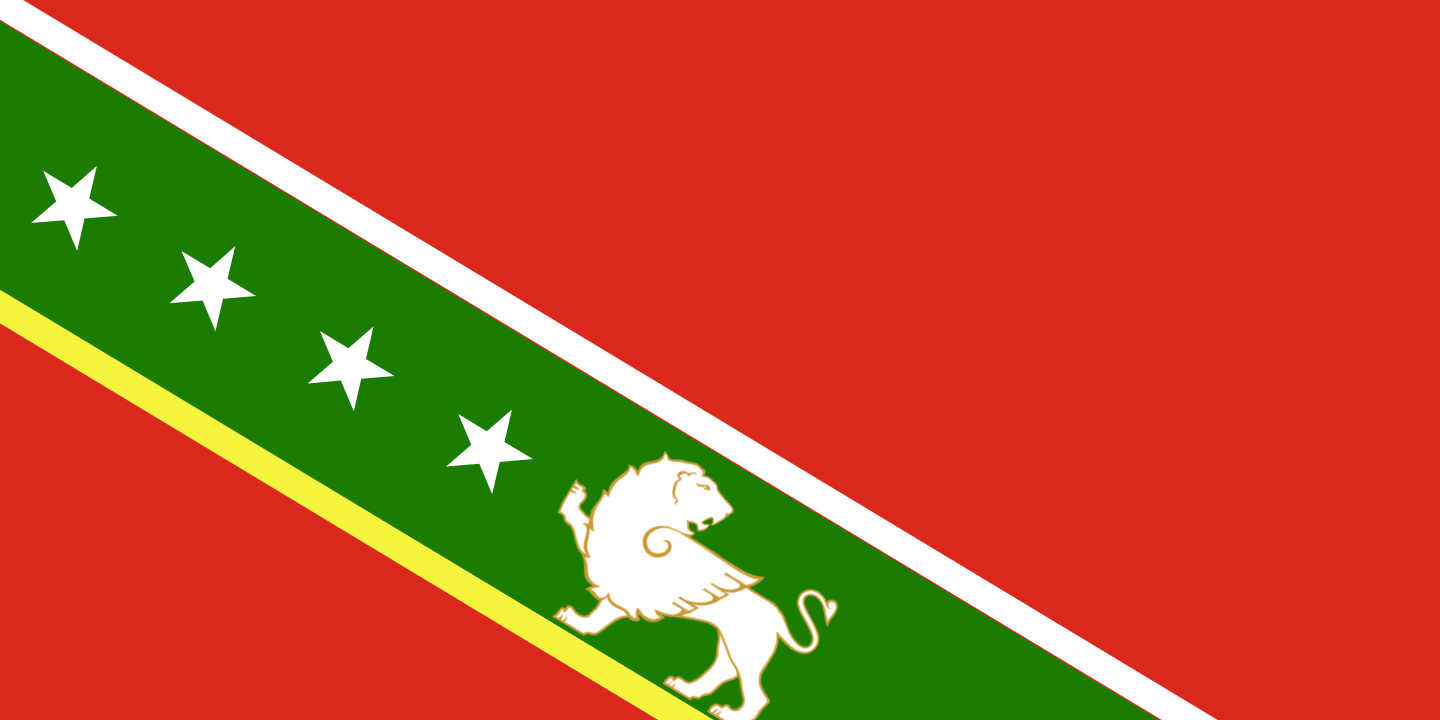 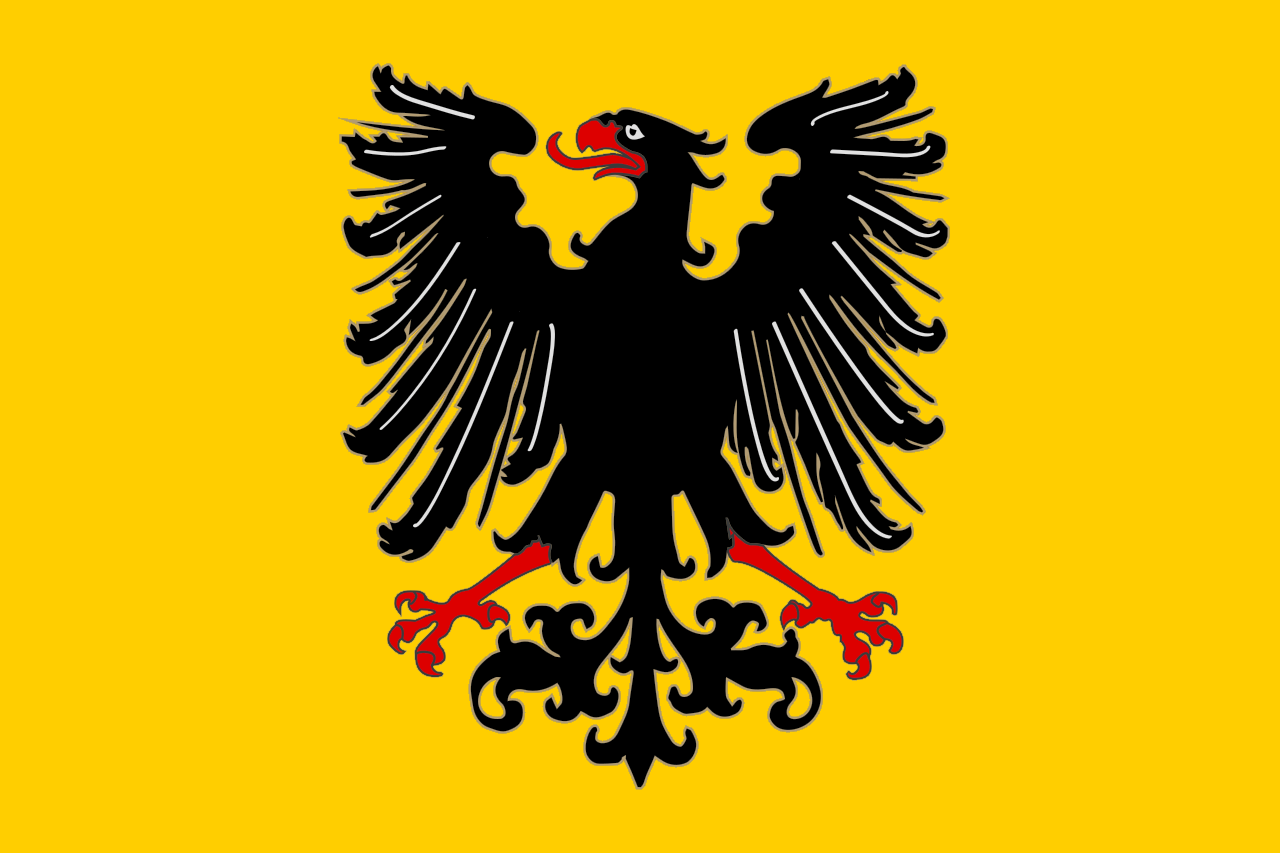 Nah, the EU4 flag for Germany is basically the same for Prussia, just with yellow backround and without the objects that the Prussian one has.
This eagle is based on the middle CoA of the German Emperor with crest.

DUWANG said:
Nah, the EU4 flag for Germany is basically the same for Prussia, just with yellow backround and without the objects that the Prussian one has.
This eagle is based on the middle CoA of the German Emperor with crest.
Click to expand...

Actually, it is the same

GER.tga from the EU4 graphics folder (resaved as png to allow upload):

In traditional heraldry, the EU4 Germany one and the Eimer design are identical. The precise twirls of the eagle don't matter, it just has to be "displayed", coloured black with one head, have red legs, tongue and beak and be on a yellow field.

Cydonius said:
Actually, it is the same

In traditional heraldry, the EU4 Germany one and the Eimer design are identical. The precise twirls of the eagle don't matter, it just has to be "displayed", coloured black with one head, have red legs, tongue and beak and be on a yellow field.
Click to expand...

Ah, I thought he meant the literal form of the eagle.
But yes, in traditional heraldry they are the same.

DUWANG said:
Ah, I thought he meant the literal form of the eagle.
But yes, in traditional heraldry they are the same.
Click to expand...

No, the concept of design

I give you... the Satanic Reichskriegsflagge: 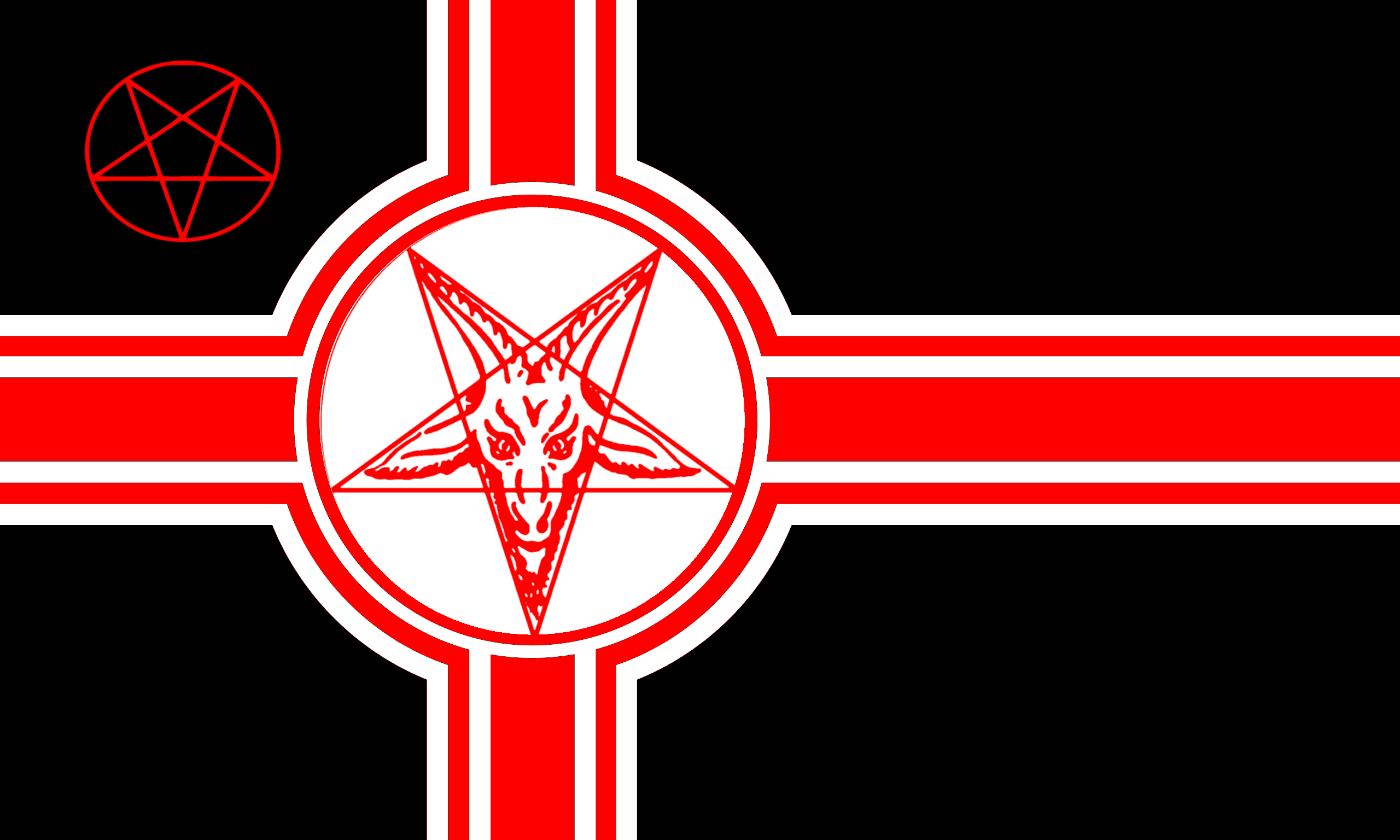 GriffinFTW said:
I give you... the Satanic Reichskriegsflagge:
View attachment 740116
Click to expand... 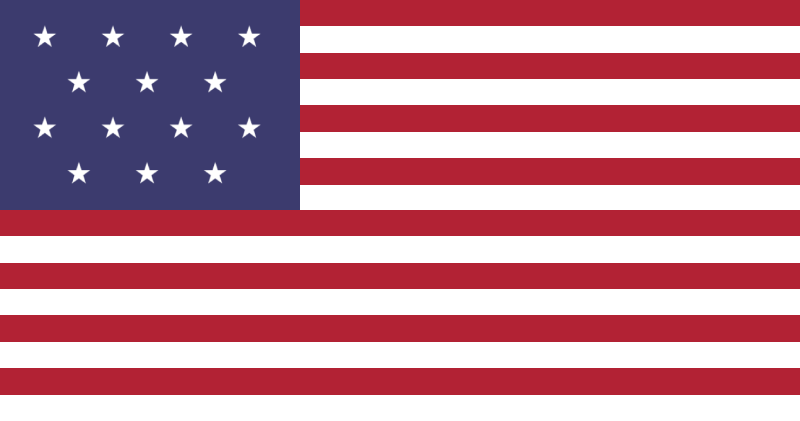 1783 flag of the United States in my The True North and the Home of the Brave timeline. The traditional 13 colonies, -Georgia, +Plymouth and +Christinia (New Sweden).

Flag of an alternate NATO, which would be known as the Organization of Democratic Nations which comprises member states like the United States, the United Kingdom, France, Germany (OTL Germany+Austria and excluding the East), Spain, Japan, Australasia, Ottoman Empire, Poland, Czechoslovakia South Africa, Italy, Benelux, Scandinavia, the Philippines, Portugal, and Morocco which was started in 1950 as a military alliance between the democratic nations around the North Atlantic as a result of merging the wartime alliance of Western Allies into a formal military alliance which then turned it into an economic, diplomatic, trade, and political alliance of member states in the 1990s, becoming one of the influential organizations of the 20th and currently, 21st centuries as it promoted not only democracy but equality, ideals of egalitarianism, free trade, and close cooperation which the organization has played key roles in boosting the economies of Europe and North America/America as well as promoting Western and Japanese culture.

This flag includes the stars of Europe and Lady Liberty holding the torch inside the circle: 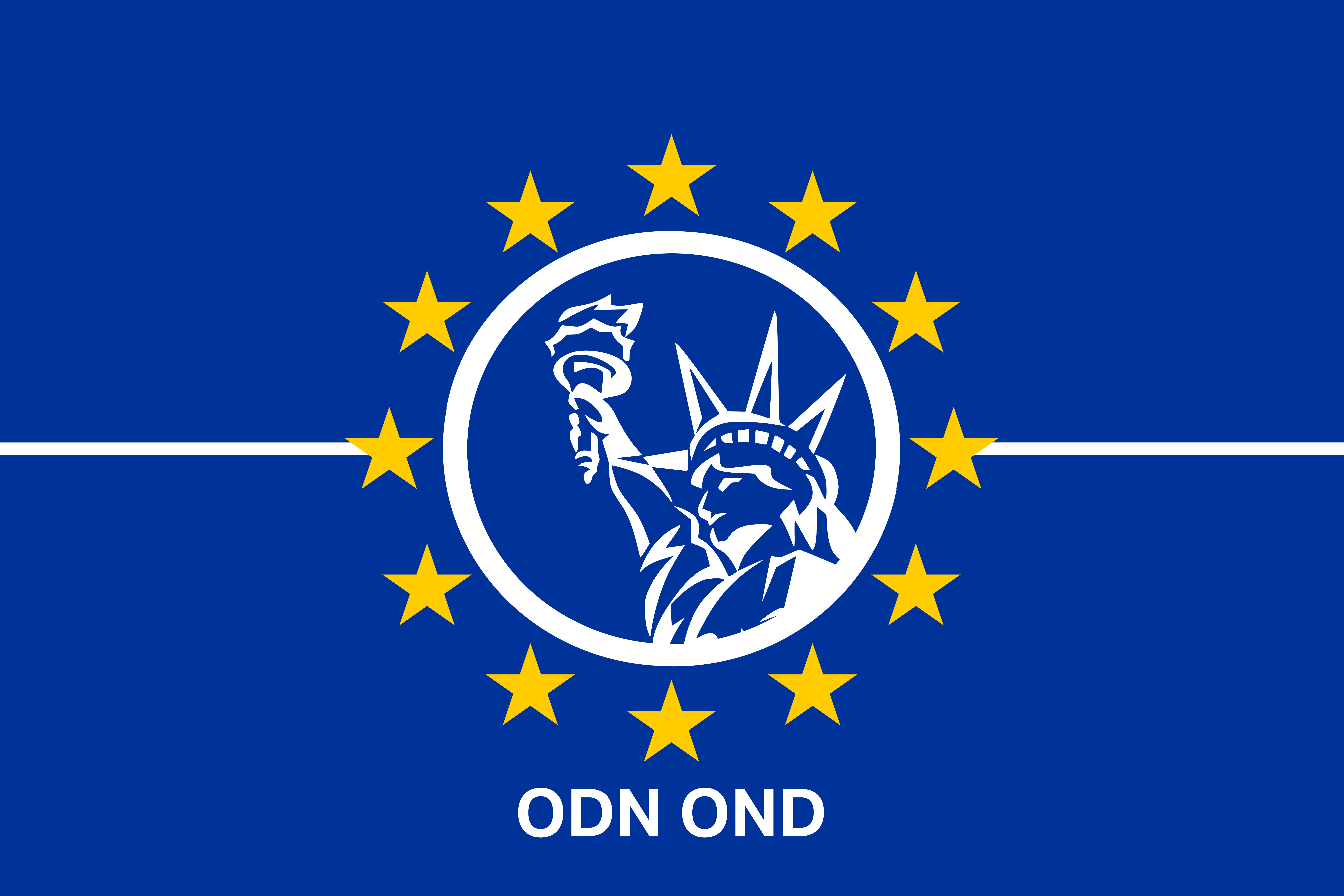 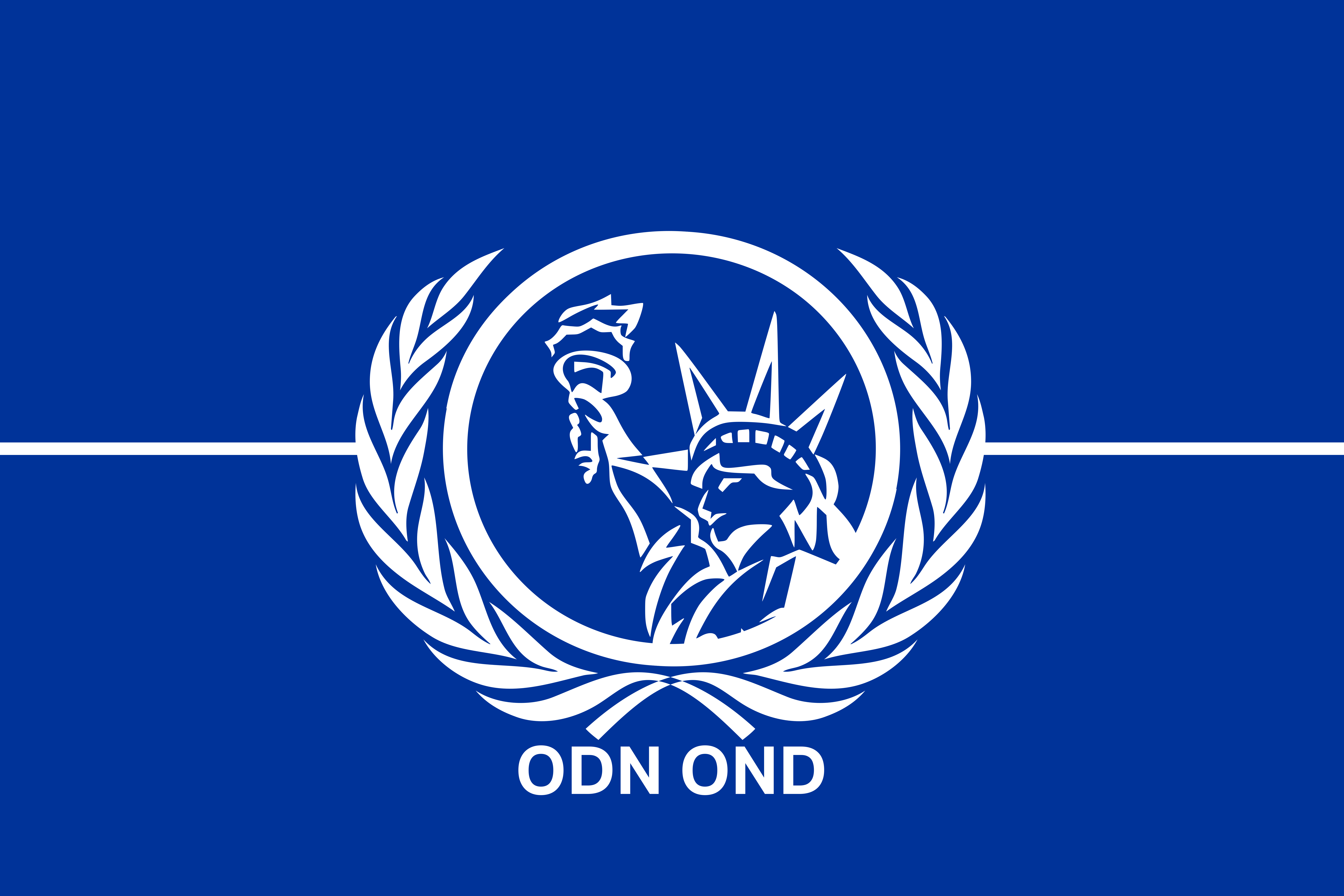