DCS - Yet Another Colour Scheme, but without an acronym

DCS - Yet Another Colour Scheme. This time without an acronym.

This scheme is planned to be a halfpoint between simple schemes with general colours and overloads such as SUCK. Why did I do this? Ask to my own person three years ago or so, which is when the project began with a Beta Version lastly updated in 2016. That version is plain terrible, full of mistakes, colour boxes are too small, there was no clarity regarding headings so at first glance it seems completely random. Also it's just a reboot of TACOS, I didn't even bother to change the name.

So a year later I decided to scrap that and actually work on a 2.0 version, which is the one I'm posting in the link below. You can see the first version of this new scheme HERE. Then I decided to expand it and actually make proper columns, one for Africa, other for Eastern Europe etc., added flag headins and coat of arms next to the names of the headings (Warning, heavily pixelated, I use MS Paint...) and added a hell lot of colours there. Anyhow, enough text. You can see a changelow if you scroll down the next link.

READ THIS: So there are two versions of the scheme, the old version in the First link and a second, WIP version in the Second link. Use the first one as for now given the second one is still in progress.

Oh BTW, feel free to suggest colours or states that ain't there.

You can never go wrong with a new expansive color scheme, excellent!

I'll make sure to steal some of these colours for Toast3r

XO Mapping said:
I'll make sure to steal some of these colours for Toast3r
Click to expand...

Heh, it's not like I stole some from yours anyways

Nobody expects the climate inquisition! 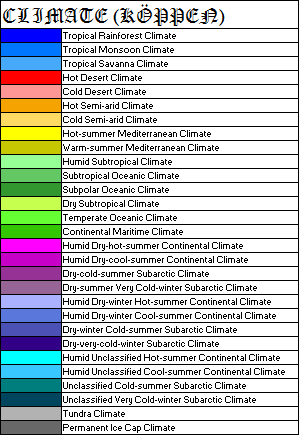 Cheeky Drex, could've posted my comments over here instead .
Any other expansions planned besides that climate one?

P.S. I don't quite get how your alternate country types work (i.e. Vassals, Autonomies, Occupation and Land Claims/Pacts)

ML8991 said:
P.S. I don't quite get how your alternate country types work (i.e. Vassals, Autonomies, Occupation and Land Claims/Pacts)
Click to expand...

First of all, all them are divided in two groups to display two different options at how to paint'em. On all of them, the Left country is the one who claims, occupies or controls (via vassalage or autonomy) the Right country.

Hey, long time since I don't upload anything here. I'm thinking of redoing the whole thing as it looks...aesthetically unpleasant. In a nutshell, it sucks. So here's a preview of what the new scheme would be, even thou' I'll almost surely change the proportions to get more writing space or add a couple more stuff on the headings such as a CoA.

Okay so I've done half of Canada and improved the overall look of it. I hope the final version will be a continuation of this. 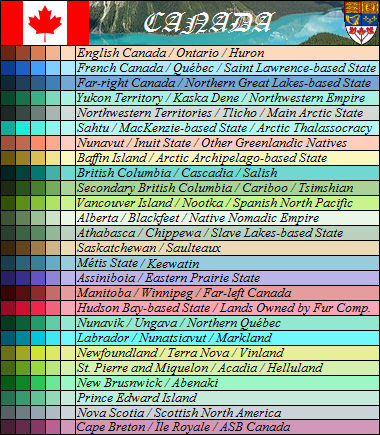 Glad to see that you are working on upgrading your color scheme since it's one of the best ones in my opinion.

I only hope that you may consider not making the united Korea color pale teal this time.
United States (General)

So here's the US, or more concretely, the types of US. 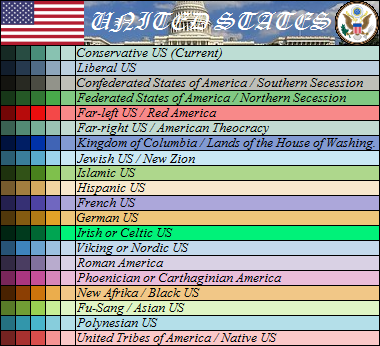 Drex said:
So here's the US, or more concretely, the types of US.
View attachment 411251
Click to expand...

Regarding the merger of Far-Right America with American Theocracy: What about a Far-Right secular or at least not-theocratic regime focused more on ultranationalism and on racist rhetoric than on religion?

Can’t believe I didn’t find this until now, this is pretty great, and the new one is looking fantastic so far.

For the Canada section, I’d add Cree on there though, maybe as an alternate for Saskatchewan, Alberta, or Manitoba.

Crazy Boris said:
For the Canada section, I’d add Cree on there though, maybe as an alternate for Saskatchewan, Alberta, or Manitoba.
Click to expand...

Fixed, it's on Manitoba now.

This time use Red instead of pink for Entre Ríos. You know, Entre Ríos being the historical Federal Province of Argentina...

black_0 said:
Regarding the merger of Far-Right America with American Theocracy: What about a Far-Right secular or at least not-theocratic regime focused more on ultranationalism and on racist rhetoric than on religion?
Click to expand...

If in doubt, I would give the CSA colour to a racist or secular-fascist US.
United States (East Coast) 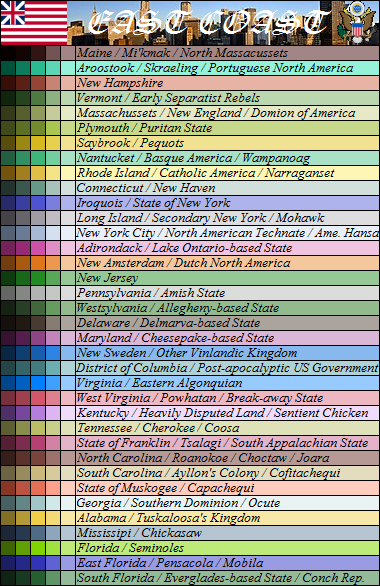 So the US is done.