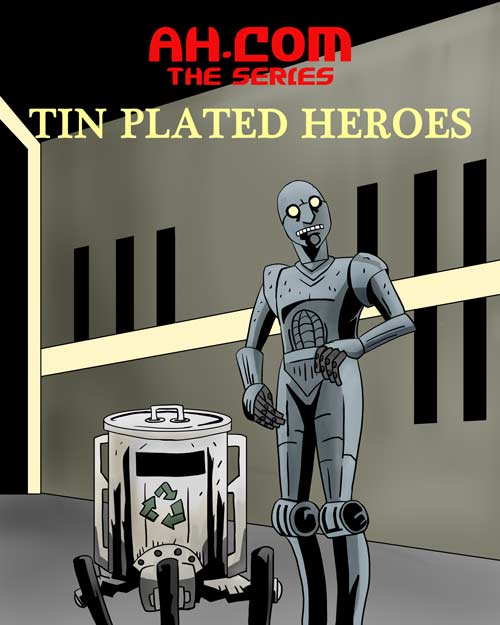 The episode opens with the AH.com Ship emerging from a vortex with a huge harpoon embedded in the outside of the ship - evidently the last timeline was a tad hostile. Landshark insists they retrieve it, so G.Bone and Psychomeltdown are sent out in spacesuits, but mysteriously vanish during a comm conversation with GBW.

Doctor What is called up to the bridge, but manages to miss three hours of time enroute, and by the time he gets there, the crew is holding a moving memorial service for G.Bone (no-one cares about Psychomeltdown). Then a mysterious figure, EvolvedSaurian, appears and stuns the whole crew. They wake up naked and bound, held hostage by EvolvedSaurian and an alternate luakel, to be sold as sex slaves to the Achaean Empire of this TL.

However, the crew's luakel - at this point still just a brain in a jar - was transferred into a crude, dustbin-like robot body by Dave Howery and Torqumada just prior to the attack. Leo Caesius, in his own robot body, joins luakel (who can only speak in beeps, leading to a C-3PO/R2-D2 dynamic) and the two of them rescue the AH.commers by loading weapons into luakel's hollow body and smuggling them into the place where the AH.commers are being held.

The first draft of this episode featured Straha in the luakel role, as this was originally intended to be released in the second series rather than the third.