The Next to the Last Omega Man 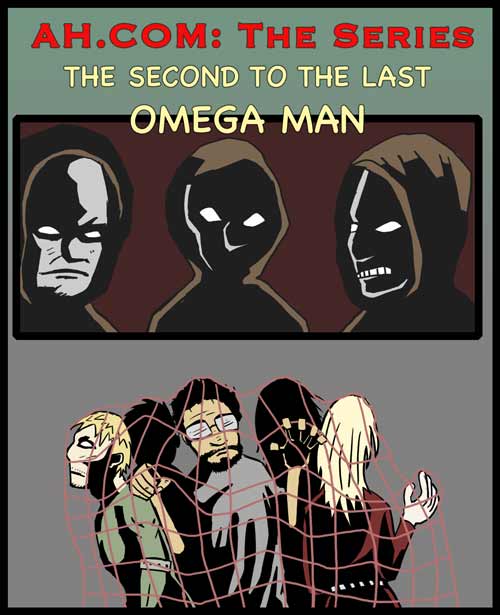 The AH.Commers end up in a timeline where the Americas, China, India and Soviet Union are practically depopulated of all human life while the European and African continents are bursting at the seams with overpopulation. Intrigued and confused by these discoveries, two teams are sent down: DOCTOR WHAT, DIAMOND, MBARRY, IRONYUPPIE and DAVE HOWERY take a shuttle down to the American continent (specifically New York City) while KITJED, WEAPON M, LANDSHARK, PSYCHOMELTDOWN and G.BONE take a shuttle down to the European continent (specifically London).

The London team discover that the only food available in London are strange green squares called Soy-l-ent Vert. Psycomeltdown and G.Bone are hooked on the stuff, much to the annoyance to the rest of the crew. While in London they eventually discover the truth about this world–a biological war occured between the U.S., Soviet Union and China approximately 30 years earlier which resulted in a massive die-off of the population of those regions. However, the survivors have now become psychotic vampire like people. The London team rushes off to warn the New York team of this discovery.

Meanwhile, the New York team finds this out the hard way when they are captured by a group of the survivors who have formed a strange cult that is led by no other than an alternate Doctor What who calls himself Father What. Just when things are beginning to look grim for the New York team, the London team (having discovered that light is painful to the cultists) manage to free them. Dave Howery heroically rescues Doctor What from an 'interrogation' from Father What but is contaminated with blood in the process.

Back on the AH.Com ship, Torq discovers that Soy-l-ent Vert is, indeed, made from people. He also manages to come up with a cure for the disease–which is rather fortunous as the episode ends with the viewers discovering that Dave Howery has now become infected with the virus.

One of the only eps to get a pictorial review (by Michael, via replacing text from a VG Cats strip) :

This episode is essentially an homage to nearly every Charlton Heston science fiction movie ever made. It borrows ('steals') ideas from Planet of the Apes, Soylent Green and The Omega Man.