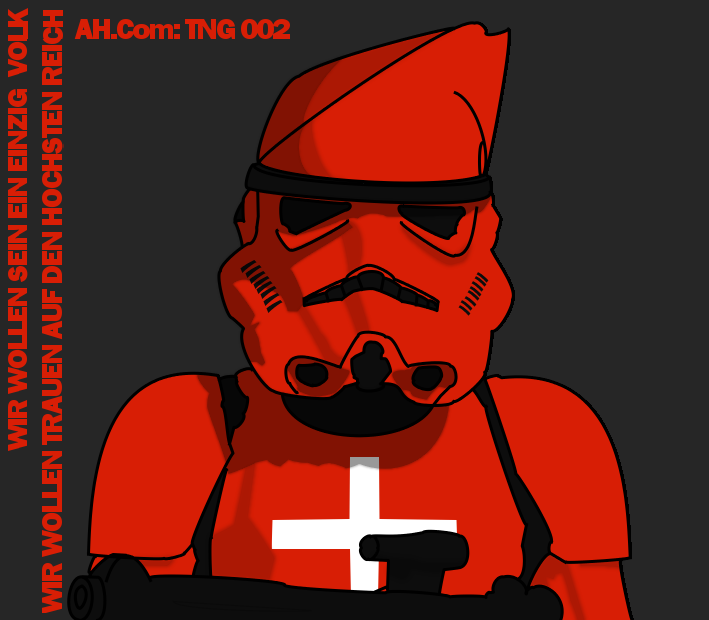 The Blasters of the Neutral

An episode of AH.com The Next Generation.

Trivia: First episode to be written by Big Tex.

The episode opens up with Big Tex and Wolf being amazed by what Nikki at first, believes is the view of a sunrise from the MSS Stranger. It turns out that what they were really staring at was a massive Cheesy Gordito Crunch from Taco Bell. They had been in a timeline where Taco Bell never got greedy and made their food portions insanely small. Nikki storms off, wishing she had her crowbar.

Later, Blue Max informs Big Tex that numerous timelines been shifting off their logical path and that ASB technology may have been profilerated across these timelines by Urusai. Blue Max requests that Big Tex looks into these cases.

Their first real mission is to investigate a timeline where the world is dominated by a Swiss Empire. The Crew is shocked to hear that the mainly neutral country has, conquered the world. The entire Crew but Analytical Engine (who was given the task to watch over them from space) and TheDarkServant (who Big Tex ordered to fix the water heater) were beamed down to the capital of the empire, Bern.

Later that night in prison, Emperor Crackersncheese of the Swiss Empire makes his introduction to the prisoners and demands information from the Crew. After a brief interrogation on Jord839 (who only succumbed because of the threat of his fingernails being removed), Crackers finds out that the Crew are Hub Agents.

Dark Servant beams down to the planet during the bombing while the Stormtroopers are distracted, and he meets up with Nikki who was disguised as a Stormtrooper. The only other crew member not captured was Hashaseen, who had found a mysterious blue light in a heavily guarded room (read: formerly heavily-guarded room). Dark Servant and Nikki break out the imprisoned crew except for ImperialVienna and Big Tex

Big Tex emerges from the Interrogation Room with several bruises. He makes several cracks about the imcompetence of the Swiss torturers (I tremble before your mighty Swiss Torture. We’re you really going to pull out JORD’S fingernails or were yall just going clip them to short so they feel weird?).

Meanwhile, ImperialVienna is interrogated by the Swiss, but is also freed by the crew. The Swiss Emperor, and Big Tex, are being guarded by Elite Swiss Stormtroopers, and with only a 75% chance of success for freeing Big Tex, Wolf reveals his secret weapon, his puppy. Wolf blows a whistle and the small, cute puppy, becomes monstrous wolf in few moments. Big Tex and Crackersncheese are talking when Big Tex warns Crackersncheese of his incoming defeat. Lobo downs several Guards and the Swiss Emperor flees.

The Crew, sans Hashaseen, is reunited once and Lobo reverts back to puppy form. Finally, the crew reunites with Hashaseen in room E-12, the armory of all the ASB tech. The Crew is shocked to know that the Swiss Emperor has weapons that only the most powerful Hub and ASB ships possess. Big Tex orders the ASB Tech's destruction (much to Hashaseen's dissatisfaction).

In the Lobby, the Crew is all beamed up to the ship and the explosives Hash planted are detonated. The A.S.S.H.A.T missiles cook off as well, and Bern is completly destroyed by 4 gigatons of explosive power. Hashaseen mentions his story of how he went through dozens of timelines through a landbased, multiverse portal room.

And thus, the story ends with Big Tex screaming about how hot the shower water is.

AH.com The Next Generation Main Page