And the Weak Shall Inherit the Earth 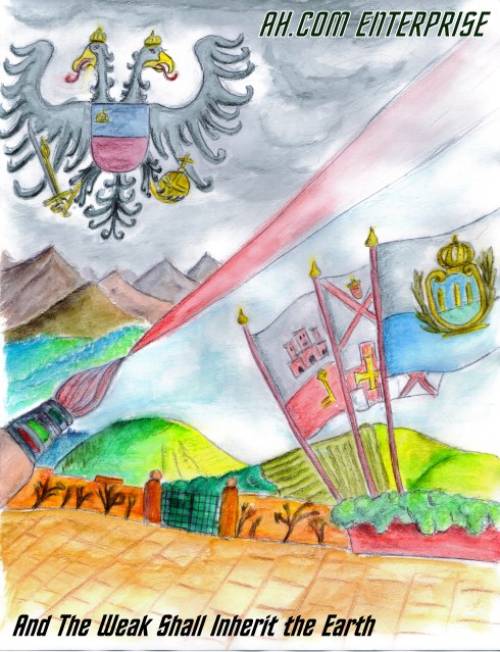 The MES-1 Allohistory arrives into orbit over an alternate Earth that has been obliterated by a global nuclear war. Despite this grim scenario, the most powerful survivor states of this timeline inexplicably turn out to be… various European micronations. As two different away teams prepare to pay a visit to the unusual great powers of this world, things are about to get even more peculiar…

This episode introduces the crew of the MES-1 Allohistory and showcases one of their first great adventures while exploring the multiverse.

BEEDOK and MING777 are the only two Allohistory characters that don't appear in this episode, as their presence in the main cast wasn't entirely decided upon yet at the time when the episode was almost finished. LIFE IN BLACK also doesn't make a direct appearence in the episode, but he is mentioned.

Some of the technology introduced in this episode includes the Caravel class MES itself (represented by the Allohistory), the small Sealion class shuttles, the new types of BFGs and also a certain tool used by crew cartographer ALEX RICHARDS.

The general reception to the episode was very positive, with many praising it as a fun and breezy opening adventure for the exploits of the Twin Fleet.

There was a bit of a formatting issue when the episode was first posted, but that problem was resolved within a few hours.

Much of the first concise draft of the episode provided by Alex actually survived into the final version. During a discussion some time in January 2015, Alex and Petike decided to make a few additions to the twist ending of the Liechtenstein plot thread of the episode, as well as a few ideas on accompanying music during the montages. Most of the latter work was done by Alex.

By either late January or early February 2015, the second draft was pretty much finished. After that, almost nothing had been changed in it until the subsequent premiere of the episode at the end of the month.

The post-apocalyptic setting of the episode and its ridiculous geopolitical outcome is a nod to AFTER CUBA, the second AH.com The Series episode, which premiered in June 2005, almost ten years before this episode.

The Liechtenstein portions of the episode are a homage to Geekhis Khan's humourous Leaves in the Wind timeline.

There's a also a bit of a nod to the Gilbert and Sullivan comic opera The Gondoliers in the San Marinese portions of the episode.