Master of the Silicon Horde, Lord of the Vast Cubicle Steppes, Great Khan of Delmarvistan and Appalachistan, an Architect of the World of Mañana,Balkanizer of Liechtenstein, Conqueror of the Republic of Mary Sue, RF Overlord, Slayer of EMI, Provider of The Power, Destroyer of Green Herrings, Sultan of Rum, Khan of Committees, Yogi of Yagi, The Scourge of Gauss, Old Skool Alchemist with a Philosopher's Bone, Piratical Parrotpunk Privateer, Warrior Who Hath Mastered the Composite Mouse, Tamer of ASBs, Owner of a Herd of 100 Billion Battle-Trained War Electrons, Slayer of the Forces of Idiocracy, He with Ten-Thousand Virtual Wives and Concubines, proud supporter and mastermind of the Lemon Wacky Peril, Ruler of All from his Technoyurt of Solitude. 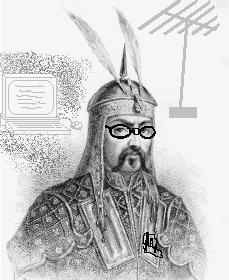 And, it should be reiterated, KHAAAAAAANNNNN!!!!

Geekhis Khan is an increasingly old member of AH.com who is adding his own member entry in a fit of gross egoism. A self-described Fat Arsed Bureaucrat, he currently roams the vast cubicle steppes of Washington, DC, serving the public good through hard work and diligence.

Also the first person since 1986 to make a Monty Python reference that was actually amusing (in Thande's highly qualified opinion).

Slag: (real name unknown) Often seen in this guise flitting about the RPG forums and blogs causing general dismay and alarm. Assumes the form of a cyberpunk rocker with spiked Mohawk, safety pin jewelry, and prodigious tattooing. Is a proponent of fast hovercars, faster women, heavy music, and heavier weaponry. Rarely seen without a chainsaw. Is a proponent of anarchy…the chaotic “brick through a cop car window with a Molotov Cocktail chaser” type of anarchy, not all that namby-pamby “we all live in one communal farm at peace with the universe” shite. The type of anarchy that allows khat-chewing Somali pirates to make a good dishonest buck at the expense of Wal Mart shipping carriers and Disney cruise ships. Seen with a variety of shady figures from many dimensions.

These have been moved to their own page. Please visit the Technoyurt !

The Great Khan believes writing should at the foremost be meaningful, but also appreciable (or at least enjoyable) and always accessible. It's all well and good to produce a great milestone of literary accomplishment that earns golden showers from the Literary Elite community, but if it never penetrates its way into the common consciousness or affects society in a profound way it's little more than the Ark of the Covenant lost in a shipping crate at Area 51.

After all, the deep and meaningful Padre Padrone may have won the top prize at Cannes in 1977, but it's “pulp genre crap” Star Wars that changed the way movies were made and changed the way people around the world thought about life and perceived the universe.

In the end GK would rather be known as a proud and princely purveyor of pre-post-postmodern populist Parrotpunk pulp which brought meaning and purpose to millions than be hailed as the Poet Laureate of a small circle of self-proclaimed “Literatissimo”.

GK is interested in things that break down the hastily assembled walls between the arts and the masses…walls generally put up with the same supremacist pique that keeps poor minorities out of exclusive golf clubs. Anything and anyone who seeks to throw a brick through the glass ceiling between “Literature” and “Genre”, consciously or not, is held in high regard. In this way he counts among his favorite authors Mark Twain, Ambrose Bierce, Poe, Anthony Burgess, Robert Heinlein, Kurt Vonnegut, Thomas Pynchon, Harlan Ellison, Terry Pratchett, Christopher Moore, and Michael Chabon. Similarly music by the truly unique and groundbreaking from Mozart to Robert Johnson to Primus is held in high esteem as is visual art from such characters as Da Vinci, Bosch, Van Gogh, Duchamp, Dali, Magritte, and Yerka, to name a select few. And there's always space on GK's DVD rack for both Kurosawa and Whedon.

Yet a place must also be set for the uniquely fun, philosophically frivolous, frivolously philosophical, campy, fantastic, and Rule of Cool lest we get too caught up in our own hypocritical “connoisseurmerism”. Best yet is the idea that these pigeonholed categories can not just escape their confinements but bleed into each other. That Jimmy Buffet can sing a song about an expat dreaming of a cheeseburger and through it capture the intrinsic paradox of our American love for both individual freedom and consumerist Nikes may hold as much sublime truth as any number of Zen koans.

GK is currently exploring the emerging concept of Interstitial Art as one overt path to breaking down artistic barriers.

As this is an Alternate History wiki, some discussion of GK's theory of AH merits mention.

One thing that is interesting is how fans assume Alternate History fiction and Counterfactual explorations to be one and the same. Counterfactuals are an intellectual exercise used by historians to explore the cause-effect relationships of OTL history by imagining what some change in OTL's historical path might have created. They are by nature structured, strictly plausible, and limited and must end before educated hypothesis is completely eclipsed by flat-out guesswork. A scientific “what if?” for the sake of exploring what probably would have happened so that we can better understand what did happen and what it means.

Alternate History is a literary device using creative “what ifs?” to create a new setting for a fictional novel, movie, game, or comic. By its nature AH is much more flexible than CF and the limits of plausibility can be stretched past the breaking point or flat out ignored in pursuit of some thematic or literary goal. While mentioning a certain Nazi Seamammal may get you lynched on AH.com, a successful Nazi invasion of England as a means of exploring the socio-political impact of totalitarianism onto the culture and generation that produced the Beatles is well worth the utter implausibility of the POD. There's a reason totally ASB works like Turtledove's fantastical sci-fi Worldwar series qualify as AH when even mentioning an alien invasion scenario in historical circles will get you laughed out of the club, as it were.

This is why Dick's The Man in the High Castle triumphs as Alternate History even though it would fail as a Counterfactual due to utter allohistorical implausibility.

However, we often see an angry Hatedom develop around a fictional piece of Alternate History because we hold its invented history to scientific Counterfactual standards. Frankly, in any fictional work it's best to observe the MST3K Mantra and look for what the story is really trying to say rather than get hung up on the details.

Of course, if the story is still crap by its own merit (or lack thereof), then by all means, flame on.

GK effectively considers himself a moderate since the net sum of his insane, radical and reactionary viewpoints effectively cancels to zero. Though his faith in the American 2-party system was mortally wounded during the Bush administration and sees the current batch of worthless oxygen-wasters in Congress standing by to deliver the coup de gras, GK for some reason holds out a fleeting hope that a massive grassroots removing-of-craniums-from-colons will occur among the voters within his lifetime…though if the Teabaggers are any example of what passes for American grassroots activism anymore, that hope may well have the life expectancy of a mayfly.

And with the recent Shutdown Crisis and Debt Ceiling Crisis pissing in that hope's I-V line, that life expectancy is looking ever more grim.

He currently vacillates between wanting to bring the two divided sides of his nation's political spectrum together and uniting them in mutual respect and reverence for what his nation can be and become, and wanting to beat them all mercilessly with a rabid crack OD'ed wolverine while repeatedly shouting “WTF? WTF?”

He lovingly treats all sides of the political spectrum with an equal sense of mocking contempt.

Has appeared as a violent punch-clock mercenary in Hashasheen: Legacy of the Insane, by Hashasheen, of course.

The eponymous character of Geekhis Khan, a crew member of the MES-2 Uchronia from AH.com Enterprise, is based on him.