Our forum includes the usual VBulletin calendar, although ours is of course programmed on a hybrid druidic stone circle/clockwork steampunk difference engine in Ian's basement. As well as member birthdays (some of us, such as David bar Elias, are fortunate enough to have two on the same day), the calendar includes a few well recognised AH.com festivals.

On the 17th of November (declared AH.comese New Year by Nekromans in 2007) in 2008 several members of AH.com, primarily Krall, constructed a real AH.comese calendar system. The AH.comese calendar has eleven months and eleven days in each week (an homage to the notorious conspiracy theorist Eleven11). Each month is made up of precisely three weeks, making for 33 days per month. In addition to this there is a period of two days termed “Mega Party Time” situated directly before AH.comese New Year. These days exist outside of any month and are just there to make the number of days equal 365. There is also one day of “Party Time” on the 7th of March in every leap year so that the number of days is 366 in those years. This means that both the Gregorian and AH.comese calendars start and end at exactly the same time. AH.comese New Year, however, is not situated at the beginning of a new calendar cycle, making the system even more confusing, an attribute perfectly fitting AH.com.—-

Each day of each week is given a name, usually based off one of AH.com's many memes and in-jokes, as follows:

AH.comese months have a names similar to those of months from the Gregorian calendar, but with an AH.com twist (all but one is based off the username of an AH.com user). The months and the inspirations for their names are shown here: 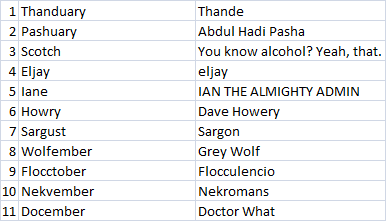 In addition to the creation of the above featured calendar system, several new AH.com holidays were created on that same day and some were added gradually over the years. Here's a list of AH.com holidays:

Dreadnought Day - On the 10th of Feburary/8th of Pashuary. A day commemorating the launching of the revolutionary battleship the HMS Dreadnought.

Drink Heavily Day - On the 12th of March/5th of Scotch. A day commemorating BOOOOOOOOOOOZE!

Resurrection of What - August 23rd. The principle holiday of Whatianity.

Flag Day - October 4th. Minor holiday in honour of AH flags and AH flag-making contests. Observed primarily by the GOVAI, its date is identical with the date of the Weekly Flag Challenge's inception in 2009.

Floccmas - AH.com AH-themed Christmas equivalent on the 23rd of December. Declared by His Excellence Pope Awesome I. (Flocculencio), as the 23rd is his birthday.

AH.comese National Holidays and Festivals - An older discussion on the topic.