Twiggierjet said:
Could we get a description for the various political parties this island has?
Click to expand... 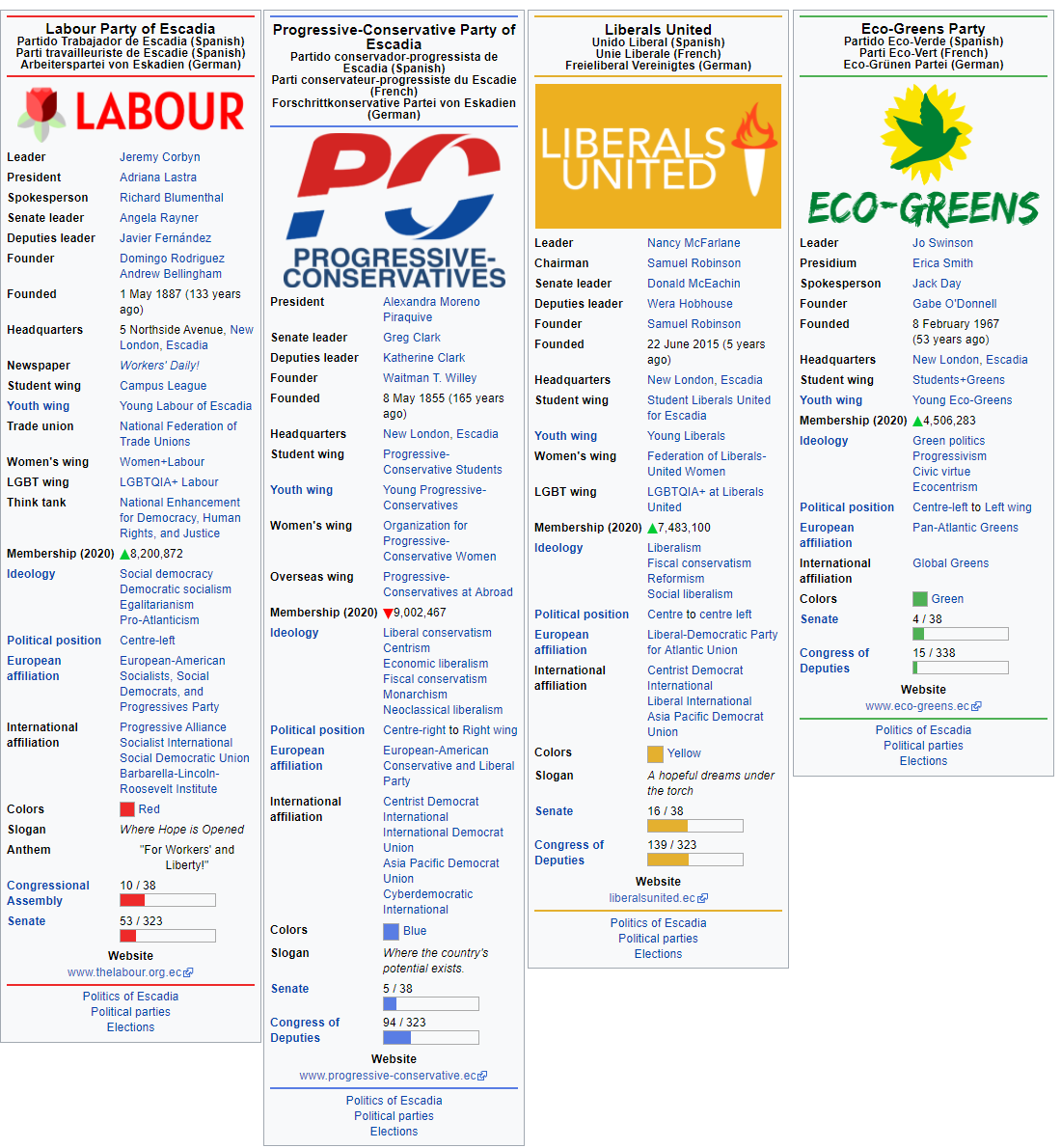 Inspired from name of the country coming from DeviantArt's work about Japanese colony turned into independent sovereign country outside of Asia.
EBC: 10/23/20 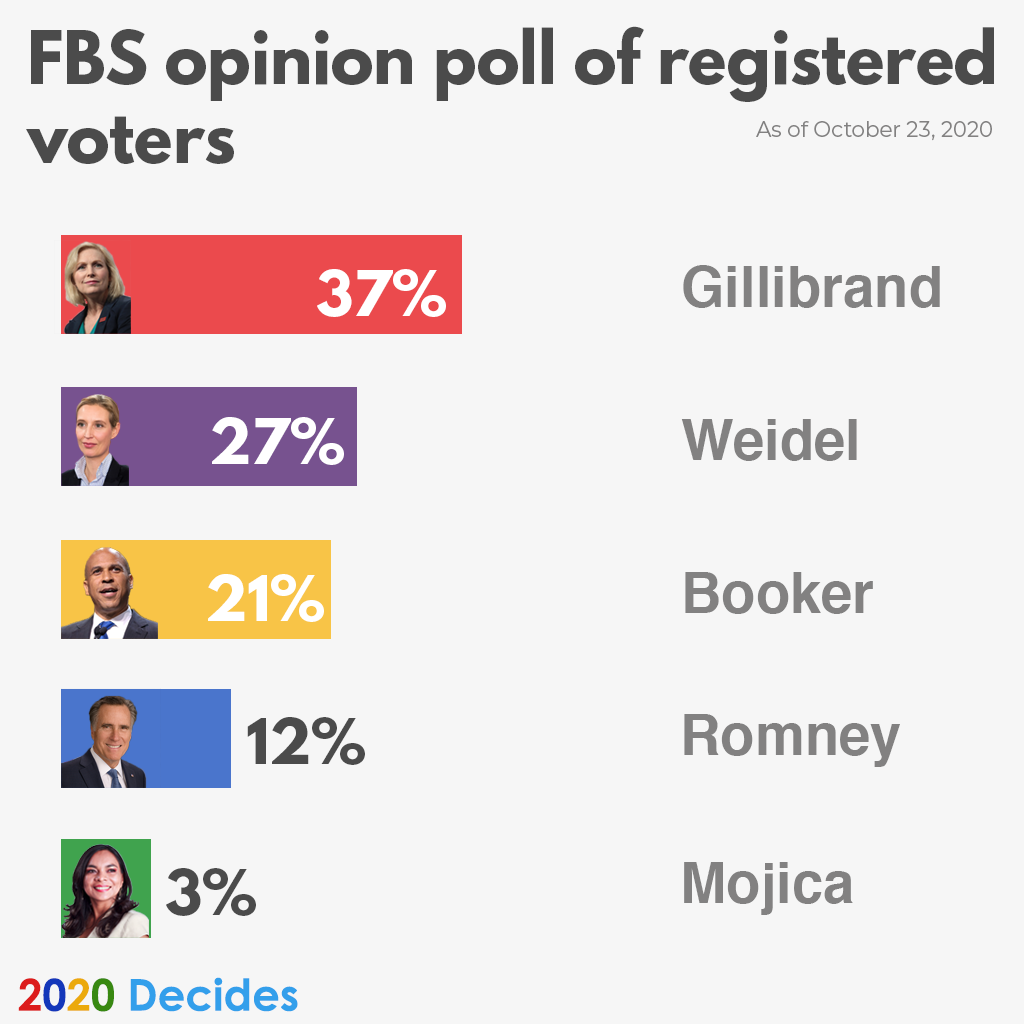 NOTE: It is an alternate United States and an alternate 2020 elections, who will decide to vote on November 3? Let's find out in the page who can decide to determine fate
New Amsterdam Times: 10/27/20

Just asking: Do you have a WorldA map of Escadia? If not, I'll make one. I'm asking because I want to include Escadia in my Mosaic Earth, and the map is on WorldA.

erictom333 said:
Just asking: Do you have a WorldA map of Escadia? If not, I'll make one. I'm asking because I want to include Escadia in my Mosaic Earth, and the map is on WorldA.
Click to expand...

No, maybe you can try to help me out but please include the Atlantic Islands like Azoria or Hyrésia.

Gabzcervo said:
No, maybe you can try to help me out but please include the Atlantic Islands like Azoria or Hyrésia.
Click to expand...

I can't seem to access the world map. Do you have a copy elsewhere?

erictom333 said:
I can't seem to access the world map. Do you have a copy elsewhere?
Click to expand...

The Q-BAM version is on the first page.

Gabzcervo said:
The Q-BAM version is on the first page.
Click to expand... 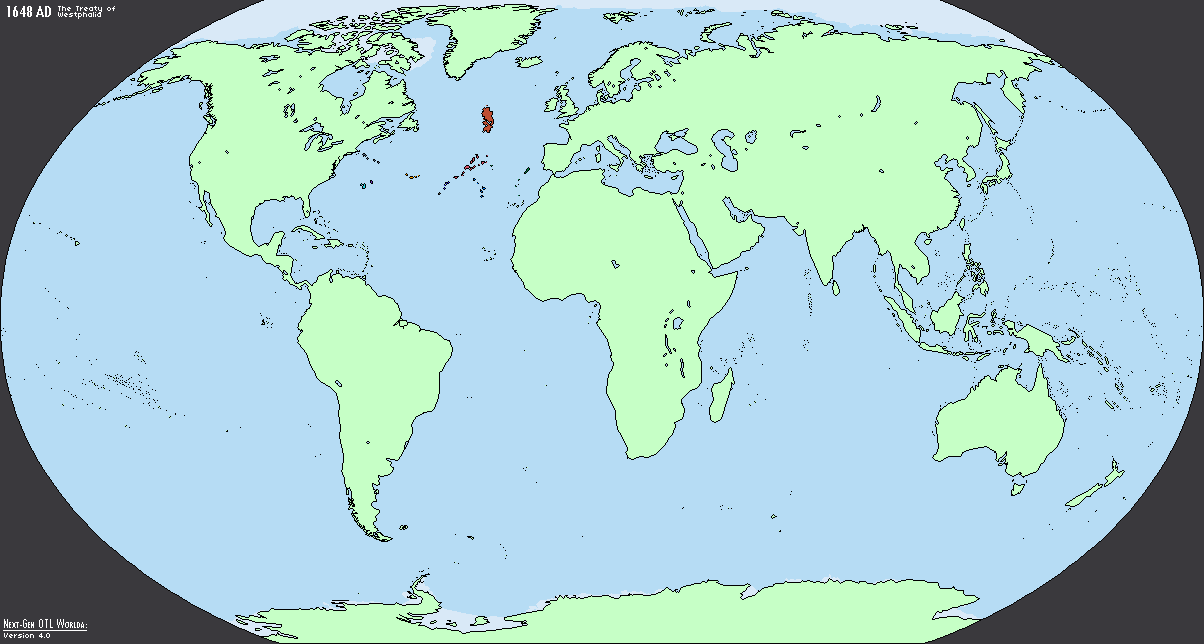 WorldA patch for the islands. 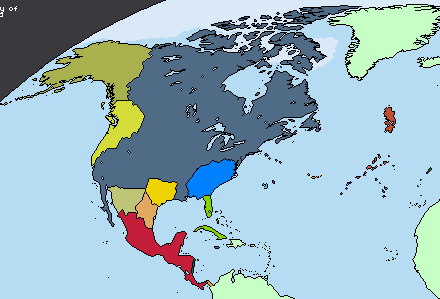 North America in WorldA. @Gabzcervo I've told you how to do the rest privately.
The Guardian: 10/19/2020

NOTE: Check on the right side of the headlines including the Humanity First and neo-luddite affiliated group committing deadly terror attacks.
Republic of Escadia

Escadia, commonly known as the Republic of Escadia, is a country in Europe despite geographically part of Northern America and is a federal parliamentary democracy under constitutional presidential republic. The country is composed of nine provinces stretching from North Point in the north to the Janovas and Windsor Bay in the south and from Rieberg Bay in the east Yarmouth Bay in the west, while also bordering Atlantic Ocean which surrounds the country's coastlines as it lies in the mid-Atlantic ridge. With an area of 264,541 square kilometres (102,139 sq mi), Escadia is the largest sovereign state in the entire insular Atlantic islands region, largest island on Terra, and the 7th largest sovereign country in the entirety of North America. It is the 36th most populous countries with an estimated 38 million inhabitants. It is the 6th most densely populated countries in the Insular Atlantic Region.

President Tim Kaine has ruled the country since the last election in 2016. The capital and the largest city of Escadia is New London, a global financial and cultural city together with city with one intergovernmental organizations with an urban population of 7.1 million people. Other major urban areas in Escadia includes Wesport, Los Benza, and others including Buckingham, New Alexandria, Chaperoux, and Lescogan.

Various indigenous peoples have inhabited the country long with the rise of East Brampton culture throughout the post-Neolithic and early Bronze Age that existed in 2100 BCE before the waves of Indo-European migration or migration from Americas where first peoples have long been overrun by Celts that caused collapse of East Brampton culture as archaeologists have theorized the collapse of Insular Atlantic civilization during the Bronze Age collapse. In the middle of Antiquity/Classical Age, the Vlirians have risen and has enjoyed contact with the Romans until natural disasters including first eruption of Mt. Howard have all but disappeared from historical records until Tariqua'ans have rediscovered and colonized the country until Viking invasion and isolation that rendered inacessible until the late 15th century. In the late 1490s, the Spanish explorer named Pedro Janovas and Matin Pinzon have established the settlement what is known as Villatoya where they used as stopover during expeditions to Americas and Spanish conquests while the French, led by Jean Cousin used what is known as Roisel, as a place of port during his explorations to North America and Insular Atlantic islands while the Hansa have established colony until French conquest in 1530. In 1510, the English have established series of outposts and settlements along the northwest coast of the country. What is now New London and Wesport turned into primary ports in between Escadia, North America, and the Insular Atlantic. Due to its location in the middle of the Atlantic Ocean, the island became a major shipping and trade hub for transportation of goods between North America, Insular Atlantic Islands, and Escadia. However, the growth of settlements led to series of conflicts between the Spaniards, the French, and the native inhabitants.

Following the Seven Years' War as part of the Treaty of New London (1763), France and Spain has renounced all claims and control of their colonial territory Terrebone and Castelo which allowed the British cemented its dominance of Escadia along with neighboring Azoria which signaled the start of British dominance in the parts of Insular Atlantic region.

With the growing impact of American Revolutionary War that led to exodus of loyalists, the revolt of San Sebastian was brutally suppressed in 1784 that led to waves of migration to the penal colony of Australia where mutineers from Castelo has been exiled, which led to rising political consciousness among intellectuals including John Masters, William Baldwin, and Daniel O'Connell that continued in into the 1820s where inhabitants of Castelo, inspired by events of revolutions in Latin America, staged violent revolt which was put down by British forces until the Dominion of Escadia Act that led to provinces of New Britain (now Royal Center), Ashton, Westminster, Easton, Masset, Terrebonne, Yarmouth, Castelo, and Estcourt into federated into sovereign country.

However, the existence was questioned by events of labour strikes, rising republican movement, and violent revolt has put monarchy into question despite large majority are against adopting new republican constitution until the events of Second International War and the defeat of the United Kingdom at the Treaty of Berlin led to chaotic events of 1919-1936 where rising political rivalry went violent, strikes, and assassinations become common as it struggles through the post-sovereign independence not long until the rise of Arthur Walsh and establishment of strong relations between the United States has led to periods of stability and recovery even as the trauma of postwar led to referendum, ending its dominion.

In the mid to late 20th century, the country was experienced by economic boom as well as formation of North American and European Community that laid foundations into formation of Atlantic Union as the country looks increasingly influential and the growth of tourism as well as revival of industries, spurred by rise of IT technology and colonization efforts outside of Earth has led to participation of Project Tharsis, a joint international effort to colonize northern Martian regions that has very resource rich especially farming despite radioactivity that existed since the 14th century.

Escadia is a developed country, and has the 16th GDP nominal per capita income on the planet and consistently ranks 3rd on the General Development Index. Escadia has been ranked four in international measurements of press freedom, government accountability, civil liberties, moral freedom, access to healthcare, and quality of life. Escadia is a constituent member state within Atlantic Union, Iberophone Union, Francophonie, Commonwealth of Nations, and part of several major intergovernmental organizations such as International Union, Terran Nations, the G31, Finanzunion, Tokyo International Cooperative Union, the World Bank, and the Comecon.​
Last edited: Dec 14, 2020
Threadmarks
Reader mode
You must log in or register to reply here.
Top
Share:
Share
Top