S. Marlowski said:
Some of the Famous Movies of Featherston's Confederacy

Triumph of the Will (1936) - A propaganda documentary featuring President Featherston about how the Confederate people was able to get out of hard times and regain their lost prestige and pride with the help of the programs of the Freedom Party as living standards being improved under Featherston.

Kentucky 1917 (1938) - A propaganda drama war movie which was set in 1917 on the Kentucky Front around a group of Confederate Army soldiers as they desperately try to defend the Confederacy against their Northern Invaders. The film would depict the ordinary soldiers sympathetically whereas the Confederate aristocratic officers and generals were likewise shown to be cowardly scoundrels.

The Northerners (1941) - A propaganda documentary which depicts the CSA's rival, the USA, as a cesspool of degeneracy, socialism, ultra-capitalism, and hypocrisy (the latter covers the Yankees treatment of the Native Americans, Mormons, and the Canadians while they preach egalitarianism.)

Mules (1942) - A Propaganda war film which is about a squadron of CSAF Mule dive bombers during Operation Blackbeard which shows the exploits of the planes and their pilots as they provide air support to Confederate ground forces against the US Army.

Camp Hill (1942) - A historical war film set during the War of Secession following General Robert E. Lee as he led his army to victory in the Battles at Sharpsburg and at the film's climax and Camp Hill against Federal forces in 1862.

Manassas (1944) - A propaganda historical war film set during the Battle of Manassas in 1861 which saw the Confederate forces defeating General McClellan's forces. This film was the last film to be produced and released in the Confederate States of America and was an attempt by Saul Goldman and his propaganda department to try and rally the Confederate people as they faced an inevitable defeat in 1944.
Click to expand...

What movies have they made since the fall of Featherston?

These are the voyages of the USS Intrepid. It's four year mission is to seek new worlds, make contact with new civilizations, to boldly go where no one has gone before...." 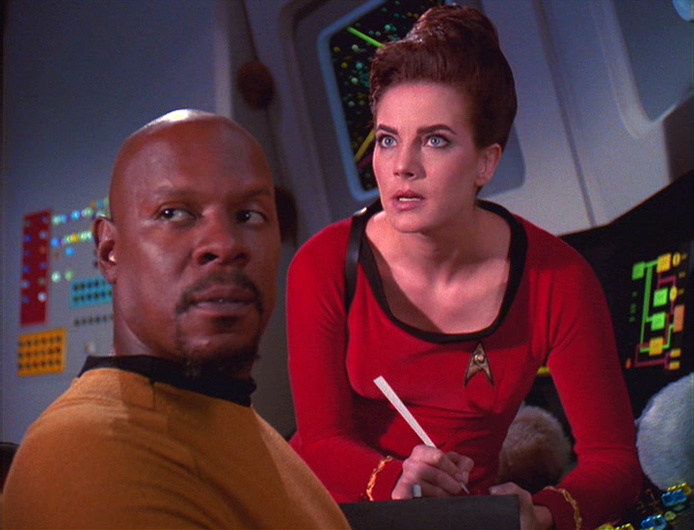 Captain Marcellus Wallace (played by Steven Law)) and Lt. Commander Mina Ferdinand (played by Katrina Bowman) react to the news of an Alliance world being assaulted by Natal slavers.

The Intrepid, damaged following last episode's battle with the Futurians, is returning to Earth before intercepting a distress call from an Alliance colony. Captain Wallace orders the ship to go to full speed, they arrive after the Natals have escaped. Hundreds are dead or injured, with hundreds, including children, abducted and taken to the Natal forward operating base...to be sold as slaves.

Intrepid makes emergency repairs and takes aboard some replacement crew, including the recently court-martialed Lt. Forrest Glenn (played by Gary Johnson) as tactical officer. Glenn had abused his authority and had attempted to revise historical documents relating to the Second Great War and the Population Reduction. Glenn's ancestors had been at the highest levels of the Confederate government and Glenn had been trying to rewrite his family's legacy. However, Wallace has no choice however much he detests this. 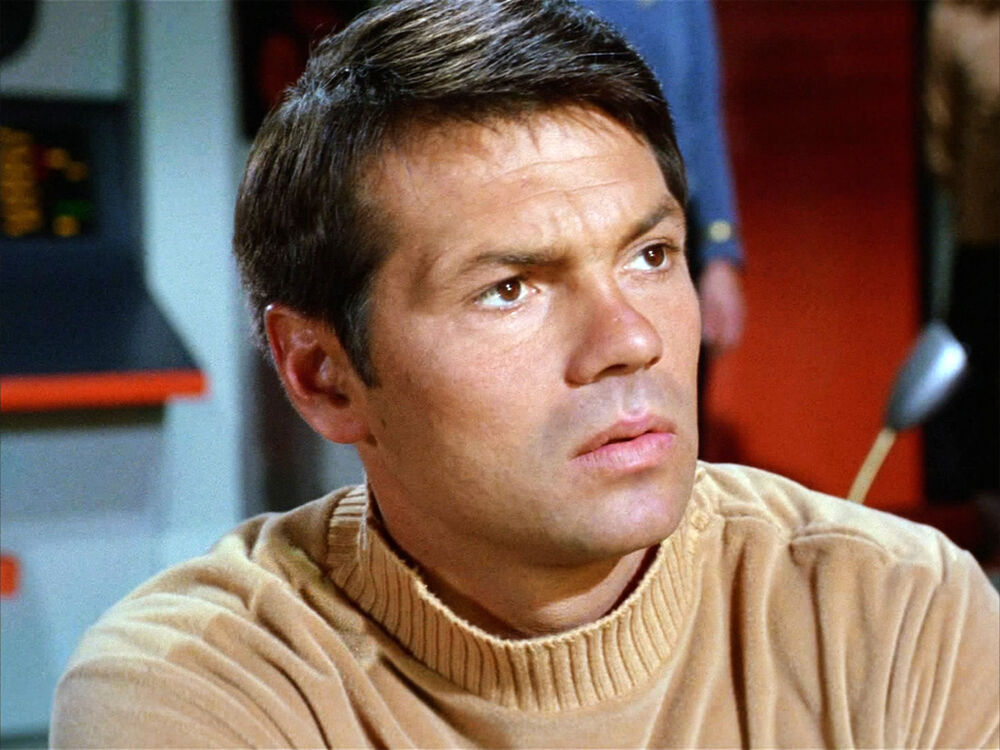 Intrepid makes it to the Natal's base and prepares to raid the planet when a message from the Alliance council arrives. A significant minority has motioned for a diplomatic solution, a truce with the Natals in hopes of their assistance with defeating the Futurians. Wallace and and his senior officers are furious and there is much discord onboard Intrepid. A pivotal moment arrives when an argument between Glenn and Commander Michael Yeats turns into a brawl that is ceased by Security Chief Goro Maki.

Wallace interrogates Glenn and comes close to striking him before Glenn confesses something: He hadn't been trying to erase his family's and the Confederacy's sins; but had been trying to include new information. Glenn's late sister had been an information archaeologist and before she passed, she had given him proven information that confirms the worst facts and confirmed the resettlement and recruitment of former Confederate VIPs into the US, Germany, and other nations.

Wallace and Glenn lead a shore party of marines and security personnel to the surface and raid the the Natalan slave camp. An epic battle erupts but Wallace and Glenn are cornered by Natalan stormtroopers and a renegade human pseudo-scientist (Lotte Lenya). The scientist boasts of her familiarity with Glenn's family and also announces her own emulation of the population reduction: experimenting on human and alien races then disposing of them when they are no longer useful.

Wallace is righteously enraged, but Glenn sneers and claims the collaborator is going far enough. Shocked, Wallace can only watch as Glenn begins a scientific pitch on how the test subjects should be engineered to become sentient "dirty bombs". The collaborator and her hosts are enthralled, so enthralled they miss Glenn disabling the facility's defenses and dispatch telegian coordinates to Intrepid. Commander Ferdinand and the Intrepid's override the facility's controls and free all the intended slaves. The Natalan commander rages and sets off a self destruct weapon. Intrepid tries to beam out Wallace and Glenn, but Glenn refuses and tries to disable the device and so only Wallace teleported to safety (along with the surviving slaves, marines, and crewmen of course). The bomb goes off, but Glenn managed to diminish the yield and only that part of the facility is destroyed.

Wallace informs the crew of Glenn's true intentions and his noble sacrifice as Intrepid makes way to a safe world. An Alliance message arrives before they dock: Intrepid is granted permission to recover only Alliance survivors, and not to free the other slaves. The Alliance council is dispatching another spaceship with a dignitary to offer a truce and membership in the Alliance. Wallace has the message deleted and makes a note in his log,

"A house divided against itself cannot stand."

I believe our united peoples couldn't endure, half slave and half free.

It will become all one thing, or all the other."*

I wonder how would cuisines of the world would be similar and different from OTL in this TL?

S. Marlowski said:
I wonder how would cuisines of the world would be similar and different from OTL in this TL?
Click to expand...

Probably more or less the same, with some exceptions:
1) Stronger emphasis on European cuisine, especially German, in the United States.
2) Confederate (a.k.a. "Southern") cuisine is more niche than OTL.

Speaking of Lincoln, I wonder what other historical/cultural references is Illinois associated with in TL-191.
It definitely can't be Lincoln, due to his immense unpopularity.

The only things that I can think of are: The Stevenson Family, Jane Addams, the three-way split of the Republican Party and Jonathan Moss (last two are from TL-191).

Allochronian said:
Speaking of Lincoln, I wonder what other historical/cultural references is Illinois associated with in TL-191.
It definitely can't be Lincoln, due to his immense unpopularity.

The only things that I can think of are: The Stevenson Family, Jane Addams, the three-way split of the Republican Party and Jonathan Moss (last two are from TL-191).
Click to expand...

Two I can think of is Edward Cole (A life-long abolitionist who freed his slaves from his father, and twice led political campaigns that prevented the legalization of slavery legalization of slavery within the State, and before hand, wrote letters to Thomas Jefferson to carry on with a campaign of emancipation of Virginia slaves.) and TL-191 version of Edward Dunne. Or even George Frederick Root years later after the fact.

What would a TL 191 British version of Jin Roh be like I wonder?

So I've been thinking about TL-191's version of Jojo Rabbit.

I'd like to maintain that it should be about a person who has no ability to affect the course of the war, but I also like the idea of the kid being the imaginary friend. So Donald Partridge, the Confederate Vice President, has a young boy as his Imaginary friend.

While the war is going on Don is busy with propaganda efforts and almost totally ignorant that the Confederacy is losing.. He pulls a major funding coup just in time for Featherstone to die. In the final scene we get this exchange.

Don: I don't have to surrender do I?

Kid: No I think you really do.

Don: but if I do they'll let me go right?

Kid: Probably not, no.

Don: But I'll at least live?

Don: Then why do I have to Surrender?!

Kid: Because if you don't a lot more people will die.

Don looks sadly at his shoes for a moment before clicking a pen and heading to sign the surrender papers as "Heroes" by David Bowie Plays. (Yes Heroes by David Bowie is a good enough song to remain a cross timeline constant)
Last edited: Nov 23, 2020

Pyro said:
I was reading the post on Colonel Union AKA TL-191's version of Captain America, which made me contemplate what the comic book industry will look like ITTL. MLJ looks like it will take the place of Timely (later Marvel) Comics, so I am guessing that some of the characters will be hybrids of early Marvel and Archie superheroes, perhaps with a little Quality thrown in. These are a few of what I had in mind:

-Colonel Union
-Firebrand (A combination of the android Human Torch and MLJ's Fireball with the Quality hero's name.)
-Sub-Mariner (More or less the same as OTL.)
-The Comet (Ditto, created by Jack Cole's counterpart TTL.)
-Quicksilver (Not the one you're thinking of. Try DC's Max Mercury.)
-Vision (A combination of the Golden Age hero and MLJ's Mr. Justice.)
-Miss America
-Rubber Man (TTL's version of Plastic Man)
-The Wizard
-The Web (Possibly revived in the Silver Age as a Spider-Man analogue?)

National Periodicals/All-Star Comics
-Superman (Since he is confirmed to exist in TL-191)
-Owl-Man (TTL's version of Batman, but with an avian motif.)
-Sparrow (TTL's version of Robin.)
-Wonder Woman (Given the USA's closeness to Germany, I wonder if TTL's Marston would model her on Norse mythology and change her into a Valkyrie.)
-Thunderbolt (TTL's version of the Jay Garrick Flash)
-The Green Lantern (Same as OTL, though with the name Alan Ladd.)

That's all I have time for, but what do you think?
Click to expand...

Would owl-man’s version of Gotham city be home to the court of bats?

terranova210486 said:
Can anyone give any examples of a Turkic Dune?
Click to expand...

Sorry for not answering your question in a quick manner.

I really don't know how a Turkic Dune would look like since I am ignorant of the culture.

The reason I said "Turkic" was because I thought that the Ottoman Turks are presumably more dominant in TL-191 and Arab culture wouldn't be well-known to U.S. audiences (until much later).

OTL Dune and TL-191 Dune would probably look very similar to those unfamiliar with Middle Eastern culture and history.

Allochronian said:
Sorry for not answering your question in a quick manner.

I really don't know how a Turkic Dune would look like since I am ignorant of the culture.

The reason I said "Turkic" was because I thought that the Ottoman Turks are presumably more dominant in TL-191 and Arab culture wouldn't be well-known to U.S. audiences (until much later).

OTL Dune and TL-191 Dune would probably look very similar to those unfamiliar with Middle Eastern culture and history.
Click to expand...

Would the other characters be the same or different?

terranova210486 said:
Would the other characters be the same or different?
Click to expand...

Probably the same, assuming that the themes wouldn't change.

terranova210486 said:
Would the other characters be the same or different?
Click to expand...