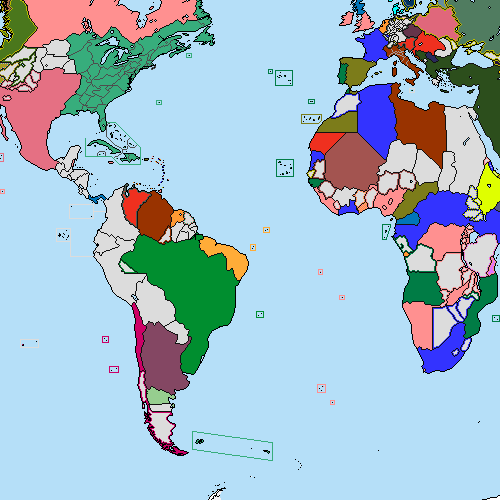 [not shown : Boer, Griqua, Baster, etc. protectorates in Sudafrique, Basouana and Southwest Africa and possibly also other places as well]
I apologise for the convergent borders in Southern Africa, Peru and Germany. I also apologise for not drawing in the various princely states in Anglo-Omani-Zanzibari-Tanganyika (thanks Jonathan Edelstein)
Last edited: Sep 4, 2020

Somebody-Someone said:
Here is my idea on some of Australia and Indonesia (featuring a Nusantaran union that includes a portuguese dominion), the Dutch dominions of New Holland and East Nusa Tenggara, the French dominions of Terresud and *Tasmania, an Italian dominion (or part of it), the native states from above independent after Dutch decolonisation, and a couple of other countries I don't really have concrete ideas about)
View attachment 578349
Click to expand...

OK, I just realised something.
There is already a New Holland ITTL that I forgot about.
I am retconning my previous Australia post.

Now, in the southwestern corner of Australia, we have the Federation of Equinoctia, formerly the anglo-dutch joint colony of Equinoctia, consisting of the dutch dominions of Edelsland and Leeuwin, the english dominions of Auralia and Eyre, and the Free City of Vlaminghsport.

the more I think about it, the more it seems that England should own more of western South Africa (Extending the eastern border of Southwest Africa to the ocean). Currently considering whether or not to change this.
Last edited: Aug 29, 2020

Somebody-Someone said:
I have looked at Upvoteanthology’s West Africa map and some stuff there are cringeworthy.

Libertina? Really?
Ghana in the exact same wrong place as OTL?
Serer Sine in absolutely the wrong place (the Serere live in SENEGAMBIA IOTL, not eastern Mali)
Two states named “Fulfude” (that’s a language)
EDIT : Also, Abuja was a minor town named Sujeja until the 1970s, Benin is in the area of the map labeled “Edo” and not the one labeled Benin
I recommend renaming “Lower Ghana” to Asanteman, “Lower Fulfude” to Futa Toro, "Serer Sine" to Gao, “Upper Fulfude” to Songhai, “Benin” to Igboland, “Inland Nigeria” to Benue and “Libertina” to Saroland or Kruland or some variant of that. Oh, and merge Abuja into Inland Nigeria/Benue or rename it something else (Jebba?)
Click to expand...

Actually, it’s even worse than I had thought. Neither Bornu nor Kanem is in “Kanem-Bornu” (which is actually basically just a big Wadai). Note also that both Kanem and Bornu are in “Kanuri”. IRL, the Kanuri Empire and Kanem-Bornu were the same thing as the Kanuri were the primary ethnicity of Kanem-Bornu.

Also, I will soon add an annotated version of the prewar map at the top of this page.
Last edited: Sep 8, 2020 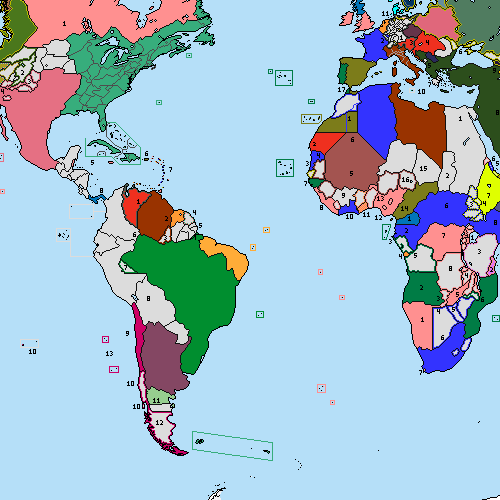 NORTH AMERICA :
SOUTH AMERICA :
EUROPE AND THE MIDDLE EAST :
The Third Balkan War will start in 1941 when a Bosniak is elected to be PM of Serbia. The king refuses to allow a government to form. This will cause a civil war, which will bring in the rest of Yugoslavia and Pannonia (supporting the PM) into a war with Romania (supporting the monarchy). During the war, Romania’s government will be couped by the Iron Guard, bringing about what is probably the only genocide in the last two centuries of TTL’s European history. After the end of the war in China, Germany will launch an intervention against both Pannonia and the National Legionary State. A conventional attack will quickly seize Pannonia’s capital, Pozsony-Pressburg-Bratislava, while the first nuclear bomb dropped outside of China will decapitate the Legionnaires.

6. The Kingdom of Bessarabia will expand to include all of Romania after the collapse of the Iron Guard regime, while Pannonia will be split between German and Russian occupation zones.
7. The Republic of Greece was created from Venice’s possessions in Greece during the formation of Italy.
8. Deep desert under intermittent Ottoman control
9. The PIC will make gains here during the war, while Persia will stay neutral.
10. Portuguese dominion of Malta
11. Hannover remains dynastically united with and formally allied to England, which will bring England into the war. Hannover was, in the end, reduced to just the german Frisian islands and Heligoland, while its possessions on the mainland were annexed to Oldenburg, which became the Kingdom of Lower Saxony within Germany.

So, if I'm understanding correctly, the First World War is France, Netherlands, Ottomans, Italy, and German Confederation vs Danubia, PIC, and England?

The way I was envisioning it, the Netherlands is only at war with Danubia (Russia, Danubia and England are not formally allied) and there are constituent states of the German Confederation on both sides (the Pan-Germanists support the Entente, some of the others support Russia, Danubia and England, and some stay neutral/watching and waiting), but other than that, yes.
Last edited: Sep 10, 2020

What is the map's color scheme, BTW?
Threadmarks
You must log in or register to reply here.
Top
Top