Kingdom of Great Britain (Look to the West)

Britain is a parliamentary constitutional monarchy in which the King's powers are ultimately devolved and subordinated to those of Parliament. The House of Commons is elected based on a system by which voters' suffrage depends on property holding, and until Catholic relief, only Anglicans were permitted to vote and stand as MPs. Each County of England, Wales and Scotland elects two MPs, except Yorkshire which as by far the largest county elects four.

In addition to this, any city with Borough status elects one or two MPs of its own, and Oxford and Cambridge Universities count as honourary boroughs separate from Oxford and Cambridge cities, with the electorate being their faculties. Because Borough status is rarely given and difficult to revoke, this means that some towns that were important cities in the Middle Ages when the status was conferred have now become unimportant villages, but retain their voting rights - these are the 'rotten boroughs', in which bribing as few as twenty voters means one can determine who wins. Parliamentary Reform to eliminate these, and give borough status to new industrial cities like Birmingham, has been an important political issue in the 18th century.

The House of Lords is composed of peers, some of whose families have held their hereditary seats since Norman times, while others are recent creations, elevating veteran elected politicians or retired generals and admirals to a position of power. The House of Lords' role is primarily to vet legislation composed by the Commons. The Prime Minister can be either an MP or Lord, but the former is becoming more common since William Pitt (OTL's Pitt the Elder) was Prime Minister.

Britain has been ruled by the Hanoverian dynasty since it was selected by Parliament to succeed Queen Anne in 1707, and is thus in personal union with Hanover as well as the Kingdom of Ireland and the Empire of North America. Modern British history is considered to begin with the Glorious Revolution of 1688, in which the Catholic King James II was thrown out and replaced with his daughter Mary married to William of Orange, Stadtholder of the Dutch Republic. This is the first time when Parliament exerted its will over the monarchy without overthrowing the whole shebang as in the English Civil War. This also led to the British Constitution, which formed the basis for the American Constitution a century later.

Under Joshua Churchill, not generally recognised:

December 1799 there was no Prime Minister due to the constitutional crisis at the time.

1825-1832: Joshua Churchill, 6th Duke of Marlborough (Rebirth Coalition/Phoenix Party; dissolved the House of Commons and ruled only through the House of Lords)

Flag of the Kingdom of Great Britain

The Union Jack was eventually made to symbolise the personal union of England and Scotland under James I. The English version of the Union Jack is now used as the flag of the Kingdom of Great Britain. It combines the Scottish cross of St Andrew (white saltire on blue) with the English cross of St George (red cross on white). As there is no Act of Union, it does not include the red saltire on white of Ireland.

After the Inglorious Revolution, the 'Asterisk of Liberty' symbol of the Runnymede Movement was added to the flag in revolutionary mauve. 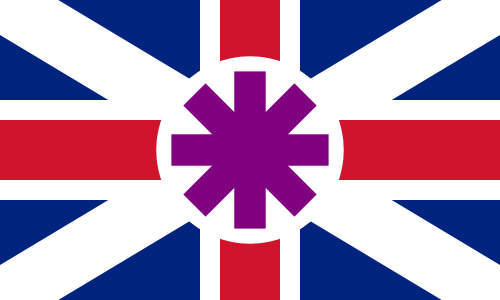 Britain runs perhaps more royal chartered companies than any other nation. Some of these include:

Due to the Company's worse fortunes than OTL, and the fact that its French rival is still in the game, the prefix 'British' and the acronym 'BEIC' are commonly used. The Company's failure to eject the French from Arcot is essentially due to the fact that Robert Clive died in French captivity in Madras after the Second War of Supremacy, and so the French won the Battle of Wandiwash. The Company took direct control over Bengal after an attempted betrayal by its Nawab, and supported Haidarabad against French-backed Mysore. When Mysore then allied with Republican France against the FEIC, the Company's leader John Pitt decided to break tradition and join with the FEIC against Mysore and the Republicans.

Unlike OTL, due to the loss of Madras to the French, the BEIC's capital is at Calcutta and it is more centralised than OTL, partly due to John Pitt. The BEIC also runs the British factories at Canton in China, but both BEIC and FEIC interest in China is somewhat reduced relative to OTL due to the fact that both of them are still fighting in India.

Same as OTL in this period.

to be filled in

to be filled in

Dramatis Personae of the Kingdom of Great Britain