Kingdom of Ireland (Look to the West)

In Look to the West, Ireland is a separate kingdom to, but in personal union with, the Kingdom of Great Britain. Ireland has produced many of the greatest “English” statesmen and soldiers, but is itself considered a backwater by most Britons, not least those same sons who have turned their back on it. Ireland's chief problem in the seventeenth and eighteenth centuries was that it is divided between a Catholic majority and a Protestant minority, the former not trusted by the Protestant English, who consider them a likely fifth column in the event of a French or Spanish invasion. The Catholics were not permitted to vote, as was also the case in England, but the fact that the Protestant Irish nobility had power over them led to much greater misery.

Many exiled Irish Catholics served in the armies and states of France, Austria and especially Spain.

Ireland was particularly controversial in the question of Catholic emancipation, but a rising in the early part of the 19th century changed all that. The “United Society of Equals”, an ostensibly pan-Irish, but in practice Protestant-dominated rebel group, staged a French-inspired Revolution that resulted in the death of most of the Irish Parliament and the devastation of Dublin. The revolution was defeated by loyalist Catholics led by the Earl of Mornington, Richard Wesley. After the accession of Henry IX (Eanrig II) to the throne, Wesley became Lord Deputy and a new Irish Parliament, with increased powers and most Catholic rights restored, was instituted.

House of Orange-Nassau and House of Stuart

1750-1760: Feardorcha I (Frederick I of Great Britain, Hanover and North America)

List of Lords Lieutenant and Deputy of Ireland since 1717

The Kingdom of Ireland uses the cross of St Patrick as its national flag, red saltire on white.

The brief U.S.E. rising used a Bloody Flag inspired by that of Republican France. Note the orange colour, indicating that regardless of their claims to be secular and unitary, the U.S.E. was in fact majority Protestant and often contemptuous of the 'priest-ridden' Irish majority. 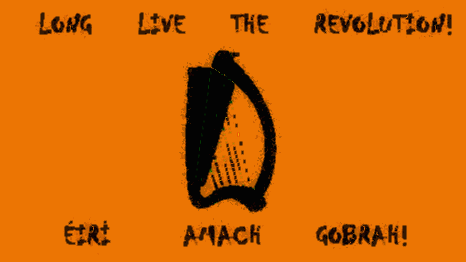