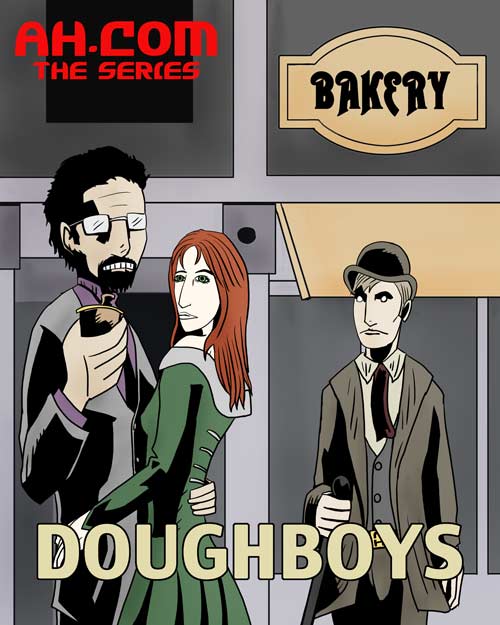 Luakel takes the doughnuts after the three have beaten themselves into unconsciousness. Psychomeltdown then steals their wallets.

Alt. Luakel and Chingo360 are fired from their burger job.

Michael and Flocculencio discover that the strip club they favored for their lunch buffet has closed down and been replaced by Dearborn Bakery, a bakery owned by Count Dearborn, there they find Alt. Luakel and Chingo360 working.

Michael buys a box of doughnuts and the two encounter a happy Psychomeltdown, which angers Michael. Michael and Flocculencio return to the ship and are confronted by Dave Howery and Diamond, who both want the box of doughtnuts Michael has. Flocc flees and Michael is beaten while trying to do the same.

Upon his regaining consciousness, Flocc offers Michael a round at the Pub. Alt. Luakel and Chingo360 are being chased by some creature, which manages to capture one of them. As Michael and Flocc head to the Pub they begin harassing a dining Psychomeltdown and are chased away by the restaurant owner, as they flee they are attacked by some creature. Psychomeltdown is also attacked while leaving the restaurant.

Three days later, a visitor appears at the airlocks of the AH.com Ship. The visitor is Alyson Hannigan, looking for Psychomeltdown. Doctor What quickly agrees to help her find him, with GBW's help. The trio discover people going missing in an area around Dearborn's Bakery and seek out Chingo360 to find out what happened.

Their investigation leads them to Count Dearborn and his bakery, where Doctor What confronts Dearborn to discover the whereabouts of the missing people. Doctor What is thrown out for causing a disturbance.

Later, Doctor What, GBW, and Alyson Hannigan enter the bakery where they are confronted by Count Dearborn. After a brief fight, Doctor What discovers the kidnapped people in the basement of the building. But there is some creature that resides there,.

Doctor What leads the monster out of the basement while the others free the bound and captive people. Doctor What fights the creature, finally trapping it in the kitchen and lighting it on fire with a vat of cooking oil.

Later we discover that Count Dearborn has his mind controlled by the creature, Alt. Luakel and Chingo360 have found a new job at MultiverseMart, and Doctor What and Alyson Hannigan retire to a romantic spot. Doctor What flees after hearing Alyson talk about getting married, having kids, and settling down away from the AH.com ship.