Added the latest flag version. Not quite happy with it but it does have that company feel!

The Professor said:
Added the latest flag version. Not quite happy with it but it does have that company feel!
Click to expand...

The green curve looks off-centre to me - is that deliberate?

FriendlyGhost said:
The green curve looks off-centre to me - is that deliberate?
Click to expand...

It's a mild optical illusion caused by the words being different lengths. Trying to fix it just made it worse .

The Professor said:
It's a mild optical illusion caused by the words being different lengths. Trying to fix it just made it worse .
Click to expand...

Actually I meant off-centre compared to the logo, not the words - see the lines I've added.

The Professor said:
Added the latest flag version. Not quite happy with it but it does have that company feel!
Click to expand...

I was getting a bit worried about the time, but it's a good one.
The logo was very nice too.

FriendlyGhost said:
Actually I meant off-centre compared to the logo, not the words - see the lines I've added.
View attachment 547115
Click to expand...

Ah bugger, I must have moved it back wrong!

And the submission period is now closed. Poll is here.

Thank you. But don't forget to announce this in the other thread as well, per standard. Announce it like in this sentence, with a @ tag and everything, and quoting my original contest entry post. Just so everything's clear in that thread.

Petike said:
Thank you. But don't forget to announce this in the other thread as well, per standard. Announce it like in this sentence, with a @ tag and everything, and quoting my original contest entry post. Just so everything's clear in that thread.
Click to expand...

Thank you for reminding me. I'll put my forgetfulness down to having been ill this past week.

UrbanNight said:
Thank you for reminding me. I'll put my forgetfulness down to having been ill this past week.
Click to expand...

Don't mention it. And get well soon.

Here's a straw poll to decide the theme of the following round. Please vote so we can decide about the theme for round 224 as soon as possible.

One of the options is suggesting your own theme, if any of you fine people have any ideas.

Petike said:
Please vote so we can decide about the theme for round 224 as soon as possible
Click to expand...

Voted for Faroe Is./Greenland - seems like it could lead to some varied and interesting ideas.

FriendlyGhost said:
Voted for Faroe Is./Greenland - seems like it could lead to some varied and interesting ideas.
Click to expand...

I think both major theme ideas for this round could produce interesting results.

Both ideas are interesting tbh!

Looking at the voting results, we currently have 12 votes total, 7 votes for the first option (Condominium), 5 votes for the second option (Greenland and the Faroe Islands), no votes for other suggestions. At this point, I think it's pointless to wait longer. Challenge 224 coming up !

We will archive the Greenland and Faroe Islands idea for later, if anyone has a lack of ideas for a new round in the future.
Last edited: May 20, 2020

Amusingly, I erroneously wrote a challenge post for the Greenland and Faroe Islands option, despite it coming in second place in the voting. Given the amount of people who expressed interest in the idea, and that it's an old idea of mine, I've decided to not rework the post and go with this idea. We will revisit the theme of alternate political condominiums at some point in the future.

So, create some interesting Greenlandic or Faroese flags with an interesting backstory. I wish every contestant good luck with the new round.

i mistook the new challenges thread for the submission one so i'll repost my original post here
This is just a redesign of the flag of Greenland to use the nordic cross, made so it still resembles the original one. I can't think of an interesting backstory for this scenario, maybe just that Greenlandians reallly want to be in that nordic cross club. 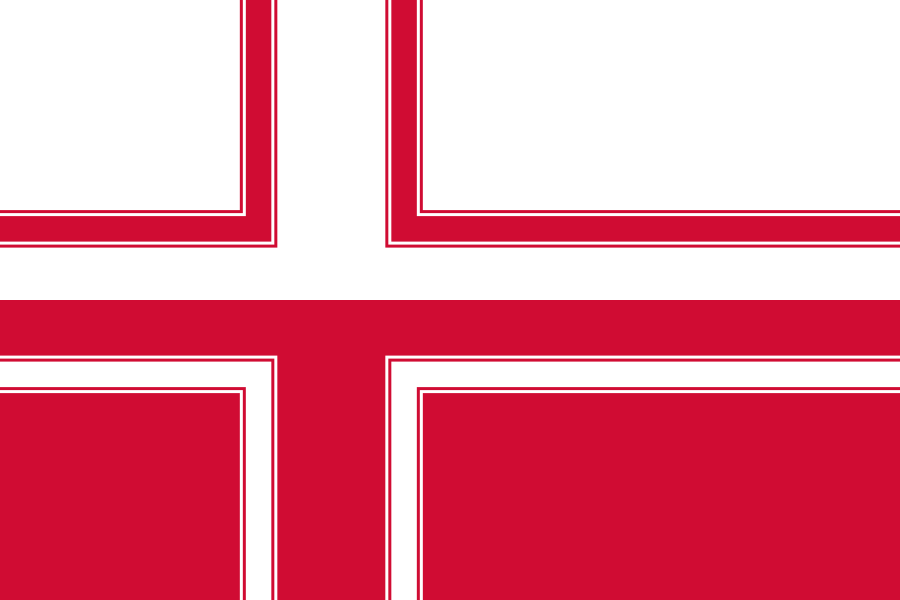 Here's a rather quick entry.

The Viceroyalty of Greenland & The Western Territories
With the death of Alexander III the throne of Scotland fell to his infant great grandson Magnus Ericson of Norway under a regency of Guardians. During his minority he was temporarily subject to Edward I of England and lost control of Norway to his uncle, but by his death he had regained Scottish independence and the Norwegian crown, although this first "northern empire" was divided among his sons.
It was during his reign that the arms of Scotland and Norway were established as a reverse colour versions of each other - a crowned lion with a silver headed axe, red and gold.
The Reunion of Scotland and Norway began under Alexander IV's second son Thomas, Prince of the Isles. He subdued Iceland on behalf of his cousin Hakon VI Davidson and was awarded with its title as Jarl or Prince. His Arms appear to have been a quartering of the Scottish and Norwegian arms with a white escutcheon bearing a black star. Thomas is believed to have engineered the later war between his brother and cousin resulting in his succession in Norway and then the regency in Scotland. It's unclear whether he was formally crowned in Scotland following the deposition of his niece but his son is labelled Thomas II by later historians.
The Iceland dynasty maintained their authority despite the growth of parliamentary authority in each kingdom by paralleling government offices in each, transferring representatives across each kingdom regularly, and as the colonies grew installing co-dominion of rule, often under joint governors and viceroys.
The Viceroyalty of Greenland & The Western Territories is no different albeit currently headed by Prince Eric jointly with his wife Joanna.
The Flag is officially a green saltire on white - reflecting the name - surmounted by the small arms of the United Kingdom of Scotland & Norway. 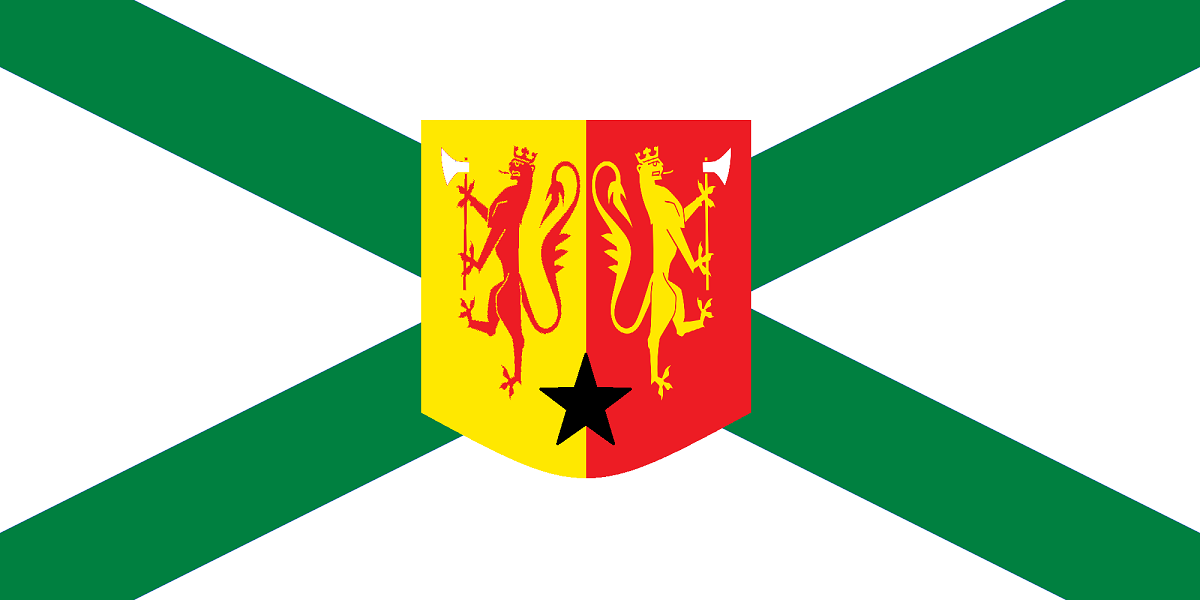 After the creation of the Kingdom of Iceland within the Danish Realm as a theoretically equal partner to the Kingdom of Denmark, the blue flag of Iceland and the red flag of Denmark were modified with a canton showing union mark of Denmark and Iceland - a combination of the two colours divided diagonally.
During the World War and the occupation of Denmark, the functions of government were transferred to Reykjavik, which led to a greater degree of autonomy for Greenland and the Faroe Islands, which they hoped would continue following the return of the realm-government to Copenhagen. This was not the case immediately, and only occurred following Greenlander and Faroer nationalist parties winning pluralities in their respective legislative assemblies in the election of 1958, which began a four-year long negotiation process which would see their elevation to the kingdoms within the Danish Realm and theoretically equal partners to Denmark and Iceland in 1962. This necessitated a change in the union mark, adding the green of Greenland and the white of the Faroe Islands to all of the kingdom flags, and changing the realm-flag similarly. 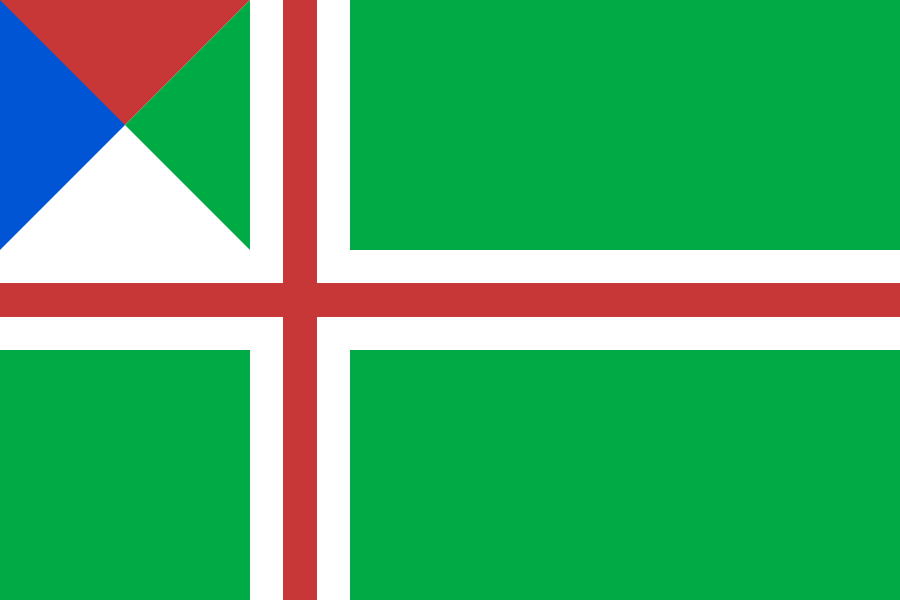 When the first Norsemen arrived on Heildeyja (OTL Iceland) in the early 9th century AD, they found it already inhabited by a few Irish hermits, whom they called the Papar. The cohabitation did not last long and by AD870 there were no Christians left on the island. Over the next century, various missionaries visited the island, from Ireland, Scotland and Norway, sometimes singly, sometimes in groups. All of them were forced to leave by the pagan inhabitants, if they were not killed outright.

Then, in AD987, Áed mac Cellaig arrived. Disdaining the non-confrontational approach used by his predecessors, Áed challenged one of the pagan priests to a test of power, apparently in imitation of Elijah's challenge to the priest of Baal recorded in the Old Testament (1 Kings 18 vv22-38). According to the Life of the Blessed Saint Áed (written in the 10th century), he went to the top of one mountain whilst the priest of Odin went to the top of another, accompanied by other priests and many acolytes. Just before dawn, the pagan priests set up an altar for a sacrifice, whilst Áed knelt to pray. As he raised his arms in supplication, 'the power of the Lord of Hosts shook the whole land and the followers of the false gods were consumed by cleansing fire issuing from the heavens and the earth'. The priests of Odin had set up their altar on a volcano, which erupted. Áed, from his vantage point on the neighbouring peak, saw: 'a cross of fire, planted by the Lord God where the unholy men had dared to worship their false gods.'

Encouraged by this sign of God's favour, Áed redoubled his missionary work and was able to convince many chieftains of the power of his God. By the time of his death at the age of 69 in AD1021, the whole population of the island was Christian. There is still a church on the site of the abbey he founded, though nothing remains of the original buildings.

The name of the island was changed from Ísland (meaning land of ice) to Heilög Eldeyja (meaning holy fire island). Over time this became shortened/corrupted to its current name of Heildeyja.

Fjærheilja (OTL Greenland) was first visited by voyagers from Heildeyja only a few decades afterwards. They found a land with fertile shores but with mountains of ice not far inland. The blinding light of the sun reflected from the ice, coupled with story of Áed, still fresh in their minds, inspired them to call the land Fjær Heilög Eyja (meaning far holy island). As happened with the name of their home island, this became corrupted over time into Fjærheilja.

Over the next few centuries, 'ownership' of Fjærheilja was disputed amongst the kings of Heildeyja, Denmark and sometimes Norway, but in 1513 the then-king of Heildeyja bought it from the Danish throne, in exchange for the Suðførroyar (Southern Sheep Islands, OTL Faroe Islands), which had been taken over by the Heildeyjans some hundred years before for non-payment of a dowry. In truth, the Danes viewed Fjærheilja as worthless compared with the Førroyar, the latter being a valuable stopping point for a voyage across the North Atlantic.

The flag of the Kingdom of Heildeyja and Fjærheilja is almost identical to the flag first recorded for just Heildeyja in The book of all nations from 1271. It celebrates the vision of the fiery cross which Saint Áed saw in the eruption. The black mountain in Heildeyja's original flag, representing the volcano's basalt slopes, was made green, representing the fertile land around the shores of Fjærheilja, and a second shade of blue was added to represent the sea joining the two lands as well as the original light blue representing the sky, or heaven. 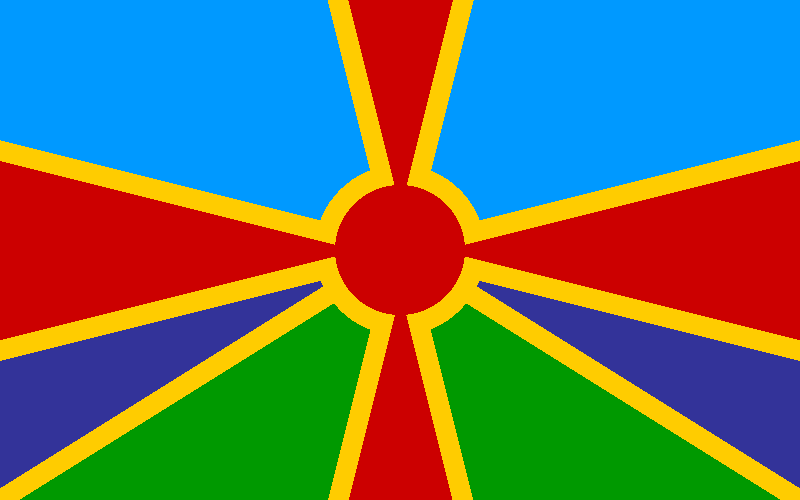 (Apologies for my mangling of the Icelandic language)


Edit: the backstory has been updated to make this meet the 'Greenland or Faroe Islands' part of the challenge. The flag remains the same.
Last edited: May 28, 2020
You must log in or register to reply here.
Top
Top